Set out early    a fair morning    Passed the mouth Bear Creek 25 yds. Wide at 6 Miles, Several Small Islands in the river    the wind a head from the West    the Current exceedingly rapid    Came to on the point of the Osarges River on the Labd Side of Missouries    this osages river Verry high, [NB: we] felled [5] all the Trees in the point to Make observations    Sit up untill 12 oClock taken oservation this night 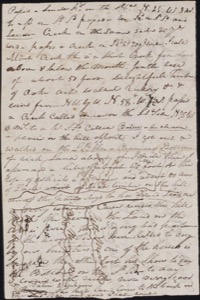 On the point of land formed by the confluence of the Great Osage River and the Missouri made the following observations.

Friday June 1t 1804    Set out    come one mile    past one River on the N Side called Big mudy River    comes in opset the Louer pint of willow Island    the Land is of Good quallity as aney I ever saw but Low    two miles to Bear Creek on the South Side    High Hill on the Loer Side    it is about 30—yardes in weth at the mouth of    〈water very Strong    past Several Isld. Came 23 miles    encamped at the mouth of the Gran Osage River the wind from the west    the day Clear〉    the day Clear wind from the west water strong    Came 12 miles    past several Islds    encamped at [3? 4?] oclk at the mouth of the Grand osoge River

Friday 1st June, 1804.    Before daylight we embarked and proceeded on our voyage; passed Big Muddy creek on the north side; and on the opposite side saw high banks. Two and an half miles higher up, we passed Bear creek and at 4 o'clock P. M. arrived at the Osage river; where we remained during the evening and the next day. The Osage river is 197 [8] yards wide at its confluence with the Missouri, which, at this place, is 875 yards broad. The country on the south side is broken, but rich: and the land on the other of a most excellent quality. The two men who went by land with the horses, came to us here: they represented the land they had passed through as the best they had ever seen, and the timber good, consisting chiefly of oak, ash, hickory, and black walnut. [9] They had killed in their way five deer. The periogue left at the mouth of Gaskenade river, came up with the man who had been lost. Here our hunters went out and killed three deer. The Osage nation of Indians live about two hundred miles up this river. They are of a large size and well proportioned, and a very warlike people. Our arms and ammunition were all inspected here and found in good order.

Friday June 1st    We set off early this morning, the weather being pleasant, and passed a River on the North side called Big muddy; the bottom land laying low on the Mesouri, we passed a Creek called beaver creek, lying on the South side of the River, and encamp'd at the Mouth of the Grand Osage River

1. Perhaps the later Bear Creek Island. MRC map 6. (back)
2. Probably later Loose Creek, in Osage County, Missouri. See fig. 10. Ibid. (back)
3. The Osage River meets the Missouri River at the Osage-Cole county line, just northeast of present Osage City. It is a large, unnamed stream on fig. 10. Ibid. (back)
4. The following numbers are written in a column under the last line of this entry: 4, 3, 6—apparently the distances that day. (back)
5. Biddle changed Clark's "fall" to "felled" after adding "we." (back)
6. Lewis's observation from Codex O. (back)
7. Probably Auxvasse River, Callaway County, Missouri. (back)
8. Clark said it was 397 yards wide. (back)
9. The ash may be white ash, Fraxinus americana L. var. americana, or green ash, F. pennsylvanica March. var. subintegerrima (Vahl) Fern.; black walnut is Juglans nigra L. (back)
10. Presumably the Bear Creek of the other journals, which is probably Loose Creek, Osage County, Missouri. (back)
Previous
Next