9th 〈Aug〉 Septembr Sunday, Set out at Sunrise and proceeded on passed the Island    Several gangus of Buffalow on the Sides of the hils on the L. S. halted on L. Side    took breakfast. Capt. Clark walked on Shore, we proceeded on

R. Fields came to the Boat    had killed one Buffalow.    passed red ceeder on the edge of the hills on bouth Sides of the river but most on the bluff on L S.    passed a handsome round knob on the hill on L. S. little abo.    passed a Smll Creek in bend at lower end of a Sand bar L. S. and Camped on a Sandbar. [5]    Capt Clak came in, Y.—k [York] killed a buffalow near the Boat by the derections of the master, Capt Lewis wint out with R Fields & each killed a buffalow, a fair Day wind from the S E    Lattide 43° 11 N.    Capt. Clark did not get a Goat or a black taile deer the objects of his pursuite. river fallinge.

Set out at Sunrise and proceeded on passed the head of the Island on which we Camped, passed three Sand & willow Islands, the Sand bars So noumerous, it is not worth mentioning them, the river Shoal or Shallow wind S E    Came too and Camped on a Sand bar on the L. S. Capt Lewis went out to Kill a buffalow. I walked on Shore all this evening with a view to Kill a Goat or Some Prarie Dogs in the evening after the boat landed, I Derected my Servent York with me to kill a Buffalow near the boat from a numbr. then Scattered in the plains, I saw at one view near the river at least 500 Buffalow, those animals have been in view all day feeding in the Plains on the L. S. every Copse of timber appear to have Elk or Deer. D[rouillard]. Killed 3 Deer, I Kiled a Buffalow Y. [York] 2, R. Fields one.

Capt. Clark found on the Lard shore under a high bluff issuing from a blue earth a bittuminus matter resembling molasses in consistance, colour and taste— 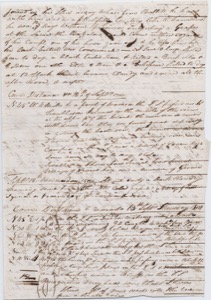 On the Lard. Shore opposite to the upper point of boat Island.—observed,

Observed time; and Altd. of ☉, with Sextant.

On the Stard shore, near a point of woodland, being the extremity of the third course of this day.—

Sunday 9th Sept. 1804.    we Set out at Sun rise & proceeded on    passed the Island. Several gangues of Buffalow on the Sides of the hills on the South Side.—    we halted took breakfast on the South Side opposite to the upper end of the Island.    we heared the prarie woolves bark on the hills    Capt.Clark went on Shore in order to kill or See Some of them &.C.    we passed Several creeks & 2 Islands before dinner    we passed a high Bluff on S. S. & a Small creek at which place we took dinner. G. Drewyer killed 1 Buck & 2 fauns. R. Fields came to the Boat had killed one Buffalow.    passed red ceder on the in Several places along the Bluffs & Several creeks    Capt. Clark joined us at dusk    had killed a Buffalow near where we camped on a Sand beach S. S. Capt. Clark informed us that the plains were allmost covered with Buffalow the most of this days walk. I saw Several on the bank.

Sunday 9th.    We set out early, and passed two small creeks [9] on the north side, high bluffs on the south, and at one o'clock landed for dinner at a small creek [10] on the south side. One of our hunters [11] brought in a deer and two fawns. This day we saw several gangs or herds, of buffaloe on the sides of the hills: One of our hunters [12] killed one, and Captain Clarke's black servant [13] killed two. We encamped at sunset on the south side.

1. From the word "halted" to "lower end of a Sand bar L. S." of this day's entry in the Field Notes (reverse of document 52) the writing appears to be in the hand of Private Joseph Whitehouse. Cf. Osgood (FN), 134 n. 2. The final entry (or entries) for Whitehouse's course differ from Clark's in the codex. Other differences are also apparent. (back)
2. Either Spring or Pease creeks, in Charles Mix County, South Dakota, both nameless on Atlas map 20. Martha's Island and Pease Island on MRC map 34, of about 1890 do not correspond well in their relative positions to the islands shown on Atlas map 20, although they are in the same stretch of the river. One could be the Spear Island shown on Evans's map 1 (Atlas map 7). (back)
3. This point of observation is not marked on Atlas map 20. The creek may be Pease Creek or Campbell Creek, both nameless on the Atlas map. MRC map 34. (back)
4. Pierre Shale. See also Lewis's note from Codex Q for this day. (back)
5. From Atlas map 20 it appears the camp was in Gregory County, South Dakota, opposite Stony Point on the other shore. MRC map 34. (back)
6. Lewis's notes from Codex Q, covering geology rather than the customary natural history. It is Pierre Shale, which Clark mentions in his entry. Atlas map 20 shows a "Molasses Spring." (back)
7. Lewis's observation from Codex O. (back)
8. Lewis's observation from Codex O, undated, but immediately following the one dated September 9, 1804. (back)
9. Either Spring and Pease creeks, or Pease and Campbell creeks, Charles Mix County, South Dakota. (back)
10. Perhaps Scalp Creek, Gregory County, South Dakota. (back)
11. Drouillard. (back)
12. Reubin Field. (back)
13. York. (back)
Previous
Next