21st of September 1804 Friday 1804, last night or reather this morng at a half past one oClock the Sand bar on which we Camped began to give way, which allarmed the Serjt on guard [2] & the noise waked me, I got up and by the light of the moon observed that the Sand was giving away both above & beloy and would Swallow our Perogues in a few minits, ordered all hands on board and pushed off    we had not got to the opposit Shore before pt. of our Camp fel into the river.    we proceeded on to the Gorge of the bend & brackfast, the Distance of this bend around is 30 miles, and 1¼ miles thro:, the high lands extinds to the gauge [gorge] and is about 200 feet    the plain in the bend as also the two opposit Sides abov and below is delightfull plains with graduel assents from the river in which there is at this time Great number of Buffalow Elk & Goats feedg    The Course from the gauge on the L. S. is S. 70 W 4½ Miles to the pt. of Ceder Timber on the L. S.    pass Sands.    worthy of remark the Cat fish not So plenty abov white river & much Smaller than usial, Great nunbers of Brant & plover, also goat and black tail Deer. 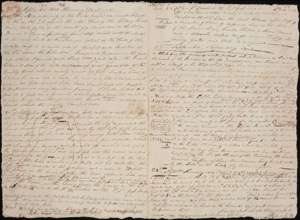 at half past one oClock this morning the Sand bar on which we Camped began to under mind and give way which allarmed the Sergeant on Guard, the motion of the boat awakened me; I get up & by the light of the moon observed that the land had given away both above and below our Camp & was falling in fast. I ordered all hands on as quick as possible & pushed off, we had pushed off but a few minets before the bank under which the Boat & perogus lay give way, which would Certainly have Sunk both Perogues, by the time we made the opsd. Shore our Camp fell in, we made a 〈good〉 2d Camp for the remainder of the night & at Daylight proceeded on to the Gouge of this Great bend and Brackfast, we Sent a man to measure step off the Distance across the gouge, he made it 2000 yds. The distance arround is 30 mes. The hills extend thro: the gouge and is about 200 foot above the water—    in the bend as also the 〈two〉 opposite Sides both abov and below the bend is a butifull inclined Plain in which there is great numbers of Buffalow, Elk & Goats in view feeding & Scipping on those Plains    Grouse, Larks & the Prarie bird is Common in those Plains.    we proceeded on    passed a (1) willow Island below the mouth of a Small river called Tylors R [4] about 35 yds. wide which coms in on the L. S. 6 miles above the Gorge of the bend, at the mouth of this river the two hunters [5] a head left a Deer & its Skin also the Skin of a white wolf—we observe an emence number of Plover of Different kind Collecting and takeing their flight Southerly, also Brants which appear to move in the same Direction.

The Cat fish is Small and not So plenty as below

(2) The Shore on each Side is lined with hard rough Gulley [grittey?] Stones of different Sises, [6] which has roled from the hills & out of Small brooks, Ceder is comon here, This day is worm, the wind which is not hard blows from the S. E, we Camped at the lower point of the Mock Island on the S. S. [7]    this now Connected with the main land, it has the appearance of once being an Island detached from the main land Covered with tall Cotton wood—    we Saw Some Camps and tracks of the Seaux which appears to be old three or four weeks ago—    one frenchman I fear has got an abscess on his they [thigh], he complains verry much    we are makeing every exertion to releiv him—

The Praries in this quarter Contains Great qts. of Prickley Pear.

1. This entry in the Field Notes (document 56) is written over a sketch map of the Big Bend (fig. 3). (back)
2. Neither Gass nor Ordway mentions being sergeant of the guard at this time, but this is only slight proof that it was Sergeant Pryor's tour of duty. (back)
3. Clark adds a note after this, "bt. fowd. 7," to keep his mileage accumulation correct as he goes to a different part of this sheet (document 56). (back)
4. It is Tylor's River on Evans's map 2 (Atlas map 8) and on the day's route map (Atlas map 22). On the Indian Office map (Atlas map 5) it seems to be "R: de [vieux] Langlois" and "old Englishmans." The latter is probably a mistranslation of the French name Langlois. It became Turkey River on postexpeditionary maps (Atlas maps 125, 126). The stream is now Medicine River, or Creek, as in Nicollet, in Lyman County, South Dakota. The island below the mouth is later Medicine Island. Mattison (BB), 225; McDermott (WCS), 150; Nicollet (MMR), 416; MRC map 39; MRY map 58. (back)
5. The hunters were Drouillard and Shields. (back)
6. These stones are either slabs of the sandy beds or concretions out of the Pierre Shale or boulders and cobbles of the glacial till that are sometimes found in the Missouri River trench. The latter deposits are much younger than the Cretaceous age bedrock of the Pierre and date to the Pleistocene Period, from approximately two million to ten thousand years ago. (back)
7. The island is shown on Atlas map 22 and may have gotten its name from Clark because it is connected to the shore. It is "halfmoon" island on Evans's map 2 (Atlas map 8). The camp was in Hughes County, South Dakota; the site is probably now inundated by Lake Sharpe. Judging by Atlas map 22, Clark overestimated the distance above Medicine Creek. Mattison (BB), 260; MRC map 39. (back)
8. Medicine River, Lyman County, South Dakota. (back)
9. Probably the bird Clark called the "green leged plove" in his weather remarks for September 22; perhaps either the stilt sandpiper, Calidris himantopus, or the pectoral sandpiper, C. melanotos. (back)
10. In Hughes County, South Dakota. (back)
Previous
Next