30th of March.    The Ice is passing in great quantites, river ran a little, The Plains are on fire on both Sides of the river    it is common for the indians to Set those Plains on fire near their village for the advantage of early Grass for the hors & as an inducement to the Buffalow to visit them—

The obstickle broke away above & the ice came dow in great quantites the river rose 13 inches the last 24 hours    I observed extrodanary dexterity of the Indians in jumping from one Cake of ice to another, for the purpose of Catching the buffalow as they float down    maney of the Cakes of ice which they pass over are not two feet Square. The Plains are on fire in view of the fort on both Sides of the River, it is Said to be common for the Indians to burn the Plains near their villages every Spring for the benifit of ther horse, and to induce the Buffalow to come near to them. 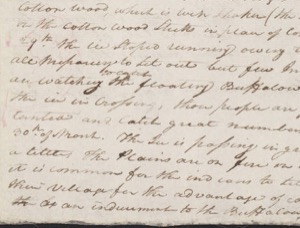 Friday March 29th    We had all this day high winds, but the Air was not so cold, as it had been for several days past.    nothing new occurred worth mentioning