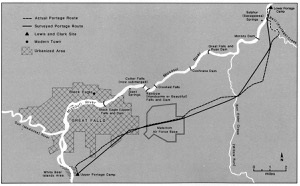 Portage and Falls of the Missouri River
(Journals 4 University of Nebraska Press,
used with permission.)

This morning I employed the greater part of the men in transporting a part of the bagage over portage creek to the top of the high plain about three miles in advance on the portage. I also had one canoe carryed on truck wheles to the same place and put the baggage in it, in order to make an early start in the morning, as the rout of our portage is not yet entirely settled, and it would be inconvenient to remain in the open plain all night at a distance from water, which would probably be the case if we did not set out early as the latter part of the rout is destitute of water for about 8 miles—    having determined to go to the upper part of the portage tomorrow; in order to prepare my boat [1] and receive and take care of the stores as they were transported, I caused the Iron frame of the boat and the necessary tools my private baggage and Instruments to be taken as a part of this load, also the baggage of Joseph Fields, Sergt. Gass and John sheilds, whom I had scelected to assist me in constructing the leather boat. Th[r]ee men were employed today in shaving the Elk skins which had ben collected for the boat.    the ballance of the party were employed in cuting the meat we had killed yesterday into thin fletches and drying it, and in bring in the ballance of what had been left over the river with three men last evening. I readily precei ve several difficulties in preparing the leather boat which are the want of convenient and proper timber; bark, skins, and above all that of pitch to pay her seams, a deficiency that I really know not how to surmount unless it be by means of tallow and pounded charcoal which mixture has answered a very good purpose on our wooden canoes heretofore. I have seen for the first time on the Missouri at these falls, a species of fishing ducks [2] with white wings, brown and white body and the head and part of the neck adjoining of a brick red, and the beak narrow; which I take to be the same common to James river, the Potomac and Susquehanna.    immence numbers of buffaloe comeing to water at the river as usual.    the men who remained over the river last night killed several mule deer, and Willard who was with me killed a young Elk. The wind blew violently all day. The growth of the neighbourhood what little there is consists of the broad and narrow leafed cottonwood, box alder, the large or sweet willow, the narrow and broad leafed willow. [3]    the sweet willow has not been common to the Missouri below this or the entrance of Maria's river; here attains to the same size and in appearance much the same as in the Atlantic States.    the undergrowth consists of rosebushes, goosberry and current bushes, honeysuckle small, and the red wood, the inner bark of which the engages are fond of smoking mixed with tobacco.—

a fine morning wind from the S W. off the mountains and hard, Capt Lewis with the men except a few take apart of the baggage & a Canoe up the Hill 3 mile in advance, Several men employed in Shaveing & Graneing Elk hides for the Iron boat as it is called—    3 men were Sent up the Medison river yesterday to kill Elk for the Skins for the boat, I fear that we Shall be put to Some dificuelty in precureing Elk Skins Sufficent—, Cloudy afternoon, we dry meat for the men to eat on their return from the upper part of the portage    Capt Lewis determine to proceed to the upper part of the Portage tomorrow & with 3 men proced to fix the Iron boat with Skins &c. &c.

June 21st Friday 1805.    a fine cool morning.    the wind from the S. W. off the mountains and hard. Capt. Lewis with the men except a fiew took a part of the baggage & a canoe up a hill on to the plain above a mile in advance. Several men employed in Shaveing & graneing Elk hides from the Iron boat as it is called, the remainder of the meat which was dressed last night was brought in this morning & the men returned    Some of them had killed 2 or 3 deer & a buffalow calf and a Small Elk.    we Saw thousands of buffalow on the high lands    the calfs verry numerous among them    they come in gangs to the river to drink &.C.

Friday 21st.    This morning was also fine, but there was a high wind. The remainder of the meat was brought in, and one of the men killed 2 deer.

June 21st Friday 1805.    a fine morning the wind from the S. W. off the Mountains & hard.    Capt. Lewis with the men except a fiew take a part of the baggage &c & a canoe up the Hill better than a mile in advance.    Several men employed in Shaveg & graining Skins Elk hides for the Iron boat as it is called.    the meat was brought in & the men returned which Stayed out to dress the buffalow last night.    they killed 2 or 3 deer and a buffalow calf & a Small Elk.    we Saw innumerable numbers & gangs of buffalow & calfs on the high plains on Stard. Side of the Missourie.

Friday June 21st    We had a fine morning, the wind blew hard from the South west, off the mountains, Captain Lewis, and greater part of our Men took a part of the baggage, & one of our Craft, up a Hill, better than a mile in advance of where we lay.—    part of our Men were employed Shaving & Graining Skins & Elk hides for the covering of the Iron boat.—

This Iron boat, [4] or rather frame was made out of wrought Iron, the keel being 32 feet long and had ribbs, Stauncheons & beams of the same, with holes & screws to fit them.    it likewise had screws to fasten the hides or skins that coverd the bottom & sides, and was in shape like a Ships Yawl.    The meat of the Buffaloes that was killed Yesterday, & left behind, was brought to our Camp, & the Men returned, who had staid to dress it, They had killed 3 deer, a buffalo calf, and a small Elk, which they also brought into camp, We saw this day innumerable numbers of buffalo in Gangs with their Calves, on the high plains on the North side of the River Mesouri.—    We still remained at our encampment

1. Lewis's iron-frame boat; see below, July 9, 1805. (back)
2. Either the female red-breasted merganser, Mergus serrator [AOU, 130], or the female common merganser, M. merganser [AOU, 129]. Holmgren, 29; Burroughs, 189. It was probably Biddle who drew a red vertical line through this passage about the fishing ducks. (back)
3. Lewis notices three different willow species here. The peach-leaved willow is the only large (or Lewis's "sweet") willow known from the area. Lewis's notation of size and habitat from the Atlantic states indicates that he may have been confusing this western tree willow with the eastern black willow, Salix nigra Marsh., which extends westward only to eastern Nebraska, along the Missouri River. The broad-Ieaved willow frequently referred to along the lower and upper Missouri, may be Salix rigida Muhl. var. rigida, yellow, or diamond, willow. The narrow-leaved willow is the sandbar, or coyote, willow. Booth & Wright 25–28; Barkley 102–5; Little, 189–W, 190–E. It was probably Biddle who drew a red vertical line through the last part of this passage, beginning with "to the Missouri." (back)
4. Whitehouse gives one of the best descriptions of the iron-frame boat. (back)
Previous
Next