a frost this morning. The Inds. Cought out of their traps Several Sammon and gave us two, I purchased two others which we made last us to day. Several a Camp of about 40 Indians came from the West fork and passed up to day, nothing killed by my party with every exertion in all places where game probably might be found. I dispatched one man [1] to the upper camps to enquire if Cap. Lewis was comeing &c.    he returned after night with a letter from Capt. Lewis informing me of his Situation at the upper Village, and had precured 22 horses for our rout through by land on the plan which I had preposed in which he agreed with me in; and requsted me to ride up and get the horses the Indian informed him they had reserved for me &c. I purchased Some fish roe of those pore but kind people with whome I am Encamped for which I gave three Small fish hooks, the use of which they readily proseved, one Indian out all day & killed only one Sammon with his gig; my hunters killed nothing, I had three pack Saddles made to day for our horses which I expected Capt Lewis would purchase &c. Those Sammon which I live on at present are pleasent eateing, not with standing they weaken me verry fast and my flesh I find is declineing 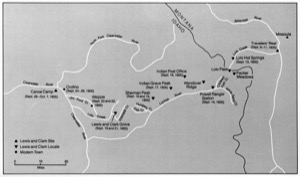 The Lolo Trail, September 11–22, 1805
(Journals 5 University of Nebraska Press,
used with permission.)
Course Distance & over the portage from the Waters of the
Missouri to the Waters of the Columbia River.— [2]

Wednesday 28th August 1805.    a clear pleasant morning.    we hoisted the large flag.    the chiefs hoisted theirs also. Several men out a hunting Several a fishing with gigs fixed on poles.    〈the natives have a bone Sharpened and fixed on poles for that purpose.〉    about 9 oClock A. M. Capt. Lewis began to trade again for horses and gives considerable more than he gave yesterday.    about 2 oClock P. M. Sergt. Gass arived here    had left Capt. Clark & party abt. 12 miles down the River. Capt. Lewis Sent him back to inform Capt. Clark that we ware waiting here to purchase horses, and wished him & his party to come up & join us. Capt. Lewis bought 5 or 6 more horses to day.    we have now in all 25, but the most of them have Sore backs.    three men Set at makeing pack Saddles.    our hunters killed nothing this day    in the evening two Strangers arived here from an other band belonging to this nation who now reside Some distance to the South of this near the Spanish country.    all the chiefs and principal men assembled to hold a council & hear the news &C    these Savages are fond of Salt.    the first we have Seen that would taste it.—

Wednesday 28th.    The morning again was pleasant, and I went on to the upper village, [3] where I found Captain Lewis and his party buying horses. They had got 23, which with 2 we had, made in the whole 25. I then returned to our camp, a distance of 15 miles, and arrived there late. I found the weather very cold for the season.

Wednesday 28th August 1805.    a clear pleasant morning.    we hoisted the large flag.    Several men went a hunting and Several a fishing with Iron gigs fixed on poles.    about 9 oClock A. m. Capt. Lewis began to trade for horses again and offered nearly double as much as yesterday.    Some Spots of Snow continues to lay on the mountain a fiew miles to the South of us.    Sergt. Gass joined us about 2 oC. and informed us that Capt. Clark & the rest of the men were about 12 miles down the River [4] waiting for us, but Capt. Lewis Sent down for him to come up as we had So many horses to pack down.    Capt. Lewis has bought 5 or 6 more today we have now 25 in all.    our hunters killed nothing this day.    in the evening 2 Indians arived at this village on horse back from another band which were Some distance to the South near the Spanish country    the principal men of the village all assembled to council with them    these Savages all like Salt and eat it on meat &c.

Wednesday August 28th    This morning we had Clear pleasant weather, & we hoisted our large flag, Several of our men went out a hunting & fishing, the latter fixed Iron Gigs on poles, knowing they would answer better than the wooden ones, that they had, About 9 O'Clock A. M. Captain Lewis began to trade with the Natives again for horses, & offered them nearly double as much Merchandise for them, as what he gave them Yesterday.    We saw some spots of snow which continued to lay on the Mountains a few miles to the South of us.—    Serjeant Gass came to our Camp about 2 o'Clock P. M.    he informed us that Captain Clark, & the Men that were with him, were about 12 Miles down the Columbia River, waiting for us.    Captain Lewis sent down for Captain Clark to come up to our Camp.—    Captain Lewis purchased from the Native's 6 More horses & we now have 25 horses 〈in〉 all together—    Our hunters returned, & had killed no game this day.    In the evening 2 more Indians arrived at this Village on horse back.    They belonged to another band of the Snake Nation of Indians which live some distance to the South of us, and near to where they say Spaniards reside.—

The principal Indians of this Village all assembled, to hold a council with those 2 Indians, which had lately arrived.—    These Indians all appear very fond of salt, and eat it with their meat &ca.    This we judged from some Captain Lewis gave them.

1. Sergeant Gass, according to Ordway. (back)
2. The portage over the Continental Divide by way of Lemhi Pass. Atlas map 67. (back)
3. The Shoshone camp was now apparently about four miles north of Tendoy, Lemhi County, Idaho, near where Kenney Creek joins the Lemhi River. (back)
4. At a fish weir on the Lemhi River, about five miles southeast of Salmon, Lemhi County, Idaho. (back)
Previous
Next