Some little rain all the last night with wind, before day the wind increased to a Storm from the S. S. E. and blew with violence throwing the water of the river with emence waves ut of its banks almost over whelming us with water, O! how horriable is the day—    This Storm Continued all day with equal violence accompanied with rain, Several Indians about us, nothing killed    the waves & brakers flew over our Camp, one Canoe Split by the Tosing of those waves—    we are all Confined to our Camp and wet.    purchased some Wapto roots for which was given, brass armbans & rings of which the Squars were fond.    we find the Indians easy ruled and kept in order by a Stricter indifference towards them

a moderate rain all the last night with wind, a little before Day light the wind which was from the S S. E. blew with Such violence that we were almost overwhelmned with water blown from the river, this Storm did not Sease at day but blew with nearly equal violence throughout the whole day accompaned with rain. O! how horriable is the day    waves brakeing with great violence against the Shore throwing the Water into our Camp &c. all wet and Confind to our Shelters, Several Indian men and women Crouding about the mens Shelters to day, we purchased a fiew wappato roots for which we gave armbans, & rings to the old Squar, those roots are equal to the Irish potato, and is a tolerable Substitute for bread

The threat which I made to the men of this nation whome I first Saw, and an indifference towards them, is: I am fulley Convinced the Cause of their Conducting themselves with great propriety towards ourselves & Party. 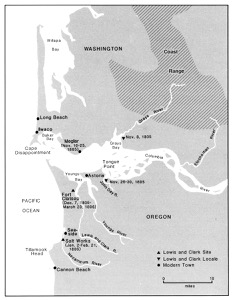 Friday 22nd Nov. 1805.    a hard Storm arose the later part of last night and continues raining and the wind high from the S. W.    the waves rolled So high and the tide raised much higher than common    dashed one of our canoes against the logs and was near Splitting it before we got it out.    dammaged it and obledged us to move Some of our Camps.—

Friday 22d.    This was a rainy and stormy morning; and we were not yet able to set out: the wind blew very hard from the south, and the river was rougher than it has been since we came here. At noon the tide was higher than common, and one of our canoes got among some logs, and was split. The rain and wind continued all day violent.

Friday Novemr 22nd    A hard Storm arose in the course of last night accompanied with Rain, & it continued raining very hard & the Wind high from the So West, This caused the Tide of flood to rise much higher, than it commonly did at this place.    The Swell ran also to an amazing heighth.    One of our Canoes floated off a small distance & the sides of it was considerably split; before we could hawl it out of the Water.    We had also to move some of our Camps, the water being all round them & a rising.    It continued raining hard all day.—