Drewyer and Baptiest La Paage returned this morning in a large Canoe with Comowooll and six Clatsops.    they brought two deer and the flesh of three Elk & one Elk's skin, having given the flesh of one other Elk which they killed and three Elk's skins to the Indians as the price of their assistance in transporting the ballance of the meat to the Fort; these Elk and deer were killed near point Adams and the Indians carryed them on their backs about six miles, before the waves were sufficiently low to permit their being taken on board their canoes.    the Indians remained with us all day. The Indians witnissed Drewyer's shooting some of those Elk which has given them a very exalted opinion of us as marksmen and the superior excellence of our rifles compared with their guns; this may probably be of service to us, as it will deter them from any acts of hostility if they have ever meditated any such. My Air-gun also astonishes them very much, they cannot comprehend it's shooting so often and without powder; and think that it is great medicine which comprehends every thing that is to them incomprehensible.—

I observe no difference between the liquorice of this country and that common to many parts of the United States where it is also sometimes cultivated in our gardens.    this plant delights in a deep loose sandy soil; here it grows very abundant and large; the natives roast it in the embers and pound it slightly with a small stick in order to make it seperate more readily from the strong liggament which forms the center of the root; this the natives discard and chew and swallow the ballance of the root; this last is filled with a number of thin membrenacious lamela like net work, too tough to be masticated and which I find it necessary also to discard.    this root when roasted possesses an agreeable flavour not unlike the sweet pittaitoe.    beside the small celindric root mentioned on the 20th inst., they have also another about the same form size and appearance which they use much with the train oil, this root is usually boiled; to me it possesses a disagreeable bitterness.    the top of this plant I have never yet seen. The root of the thistle after undergoing the prossess of sweating or baking in a kiln is sometimes eaten with the train oil also, and at other times pounded find and mixed with could water untill reduced to the consistency of sagamity [1] or indian mush; in this way I think it very agreeable.    but the most valuable of their roots is foreign to this neighbourhood    I mean the Wappetoe, or the bulb of the Sagitifolia or common arrow head, which grows in great abundance in the marshey grounds of that beatifull and firtile valley on the Columbia commencing just above the entrance of Quicksand River, and extending downwards for about 70 Miles.    this bulb forms a principal article of traffic between the inhabitants of the valley and those of this neighbourhood or sea coast. The instrument used by the natives in diging their roots is a strong stick of 3½ feet long sharpened at the lower end and it's upper inscerted into a part of an Elks or buck's horn which serves as a handle, standing transversely with the stick or it is in this form [2]    A the lower point, B the upper part or handle.— 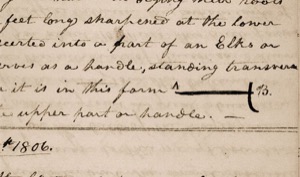 Drewyer and Bapeist laPage returned this morning in a large Canoe with Commowol and six Clatsops.    they brought two Deer and three Elk and one elk Skin, haveing given the flesh of one other Elk they killed and three Elk skins to the Indians as the price of their assistance in transporting the ballance of the meat to the Fort; these Deer and Elk were killed near pt. Adams and those Indians Carried them on their Backs near 4 miles, before the waves were Sufficiently low to permit their being taken on board their Canoes. The indians remain'd with us all day. The Clapsots witnessed Drewyers Shooting Some of those Elk, which has given them a very exolted opinion of us as marksmen and the Superior excellency of our rifles Compared with their guns;    this may probably be of service to us, as it will deter them from any acts of hostility if they have ever meditated any such.

our air gun also astonishes them very much, they Cannot Comprehend its Shooting So often and without powder, and think that it is great medison which Comprehends every thing that is to them incomprehensible. [4]

The nativs of this neighbourhood ware no further Covering than a light roabe, their feet legs & every other part exposed to the frost Snow & ice &c.

Friday 24th Jany. 1806.    a light Snow fell the later part of last night. Several Showers of rain and hail this day.    in the afternoon G. Drewyer & Batteast Lapage came to the fort.    3 Indians came with them in a canoe. Drewyer had killed 4 Elk 2 of the other hunters killed 2 deer.    they brought the meat in the indians canoe except what they gave them for packing &C.

Friday 24th.    At daylight some snow fell, and there were several snow showers during the day. In the afternoon two of the hunters [5] and some of the natives came to the fort in an Indian canoe with the meat of two deer and an elk they had killed. The Indians were barefooted notwithstanding the snow on the ground; and the evening was so bad we permitted them to stay in the fort all night.

Friday Janry 24th    Last night we had a light snow, which hardly made the ground white, & some showers of rain & hail fell during this day.    In the afternoon 2 of our hunters [6] that were out returned to the Fort, they had killed 4 Elk, & brought in with them 2 Deer which 2 other of our other hunters had killed, These 2 Deer where brought in an Indian Canoe by them & 3 Indians to whom this Canoe belonged.    They brought also the Meat of the Elks in this Canoe, and had given these Indians 2 Elk skins & a considerable of the Meat to them, for packing & bringing in their Canoe, the whole of the Meat left, the Skins &ca.