On April 27, 1805, the expedition left the mouth of the Yellowstone River and probably passed the boundary of present-day Montana that same day. The courses of the Yellowstone and Missouri Rivers have changed greatly in the past two centuries, leaving room for some doubt as to the exact day the party reached what is now the eastern border of Montana. They very soon encountered large numbers of deer, elk, bison, wolves, and grizzly bears. They reached "Martha's River" (now the Big Muddy River) on April 29 and the "Porcupine River" (now the Poplar River) on May 3. The Milk River was reached on May 8 and the Musselshell on May 20. "Judith's River" (now the Judith River) was passed on May 29 and the mouth of "Maria's River" (now simply spelled the Marias River) on June 2, 1805.

A major geographic discovery, the Great Falls of the Missouri River, was reached on June 16, 1805. At that point a major portage was needed, and it was not until July 15 that the party was able to get under way again. Captain Clark and his small advance party reached the Three Forks region on July 25,where the Jefferson, Madison, and Gallatin Rivers (all named by Lewis and Clark) merge to form the Missouri. It was also near here that Sacagawea had been captured five years previously. At Three Forks the expedition had reached an elevation of slightly more than 4,000 feet and was at the very western edge of the Great Plains. The rest of the group arrived the 17th, and after three more days of local exploration they set off again. Following the westernmost branch (Jefferson River) upstream, the expedition soon was in the heart of the Rocky Mountains and about to cross the Continental Divide.

The route of the return trip across Montana is complicated by the fact that the expedition split into several parties after crossing the Rocky Mountains at Lolo Pass, west of present-day Missoula. From Travelers' Rest camp (about 20 miles south of Missoula) Captain Clark and a group of 20 men, plus Sacagawea and her son, began traveling southward on July 3, progressively making their way past the sites of present-day Hamilton and Jackson. On July 8 they reached the Beaverhead River somewhat above the location of present-day Dillon, where they found their cache of supplies as well as their canoes. From there they moved downstream to Three Forks, arriving July 13, 1806. Ten members of Captain Clark's group were then sent via canoes from Three Forks to Great Falls, to begin the arduous portage around the falls and rapids. 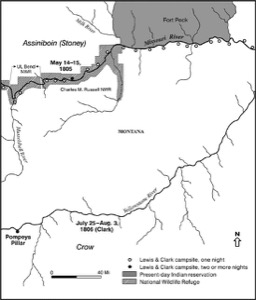 Map 5. Route of Lewis and Clark in Eastern Montana

River Distance: Montana-North Dakota border to Three Forks, 945 river miles, according to Lewis and Clark. Because of recent impoundments, present-day river distances are now substantially less than the original distances calculated by Lewis and Clark.

Map of route of Lewis and Clark in Eastern Montana 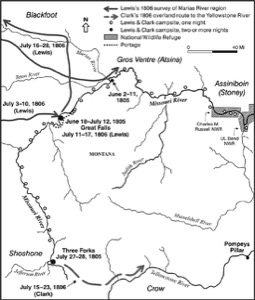 Map 6. Route of Lewis and Clark in Western Montana as Far as Three Forks

River Distance: Montana-North Dakota border to Three Forks, 945 river miles, according to Lewis and Clark. Because of recent impoundments, present-day river distances are now substantially less than the original distances calculated by Lewis and Clark.

Captain Clark and his remaining 12-person contingent (10 men plus Sacagawea and her 17-month-old son, Baptiste) and their horses moved overland across Bozeman Pass and reached the upper Yellowstone ("Rochejhone") River near the present site of Livingston on July 15, 1806. There the trees were not large enough to make canoes, so they continued downstream. At the approximate site of present-day Columbus the group stopped long enough to manufacture two dugout canoes from cottonwoods and then resumed water travel on July 24. They gradually made their way down the Yellowstone, making a short stop on July 25 at a sandstone promontory that Clark named "Pompy's Tower" in honor of Sacagawea's son, whom Clark had nicknamed Pompy. There Captain Clark inscribed his own name and the date. In that general vicinity they saw a large herd of bighorns as well as flocks of geese and pigeons. They arrived at the mouth of the Yellowstone on August 3, 1806, thus finally leaving present-day eastern Montana and again passing into what is now western North Dakota.

From Travelers' Rest camp, Captain Lewis and his group of nine men (and five guides) independently set forth in a northeasterly direction on July 3, 1806, for Great Falls, arriving at the river after a hard march of eight days. He left six of his party at Great Falls to assist Clark's ten-man contingent with the downstream portaging, and with his remaining three handpicked men headed on July 16 for a brief reconnaissance of the Marias ("Maria's") River. On their way north, they sequentially crossed the Sun River ("Medicine River") and the Teton River. After reaching the Marias, Lewis doggedly followed it northwest to a point about 20 miles west of present-day Cut Bank, along a northern tributary, Cut Bank Creek. He was searching for the northernmost limits of the Missouri's drainage, and thus the possible northernmost legal limits of the Louisiana Purchase. By July 22 he was within sight of the Rocky Mountains, but the river had still not turned north, and several days of bad weather had made it impossible for him to establish his exact location. After turning back south and crossing Two Medicine River (the south fork of Maria's River in Lewis's terminology), the exploration ended abruptly on July 27 when eight Piegan Blackfoot men, with whom they had held a peaceful council the day before, tried to steal the group's guns and horses. In the resulting fight one Blackfoot man was killed and another was evidently fatally wounded. Lewis himself was very narrowly missed by a musket ball. Lewis and his men quickly retreated and again reached the Missouri River near the present site of Virgelle on July 28. The site of this harrowing encounter is on private land about 15 miles northeast of present-day Valier.

The group of six men who had been left by Captain Lewis to negotiate the Great Falls portage was soon met by the ten others who had been sent downstream by Captain Clark from Three Forks to help with the portaging. After negotiating the Great Falls portage, the 16 men continued downstream. By the greatest of good luck, they encountered Lewis and his three-man party just as they were returning to the mouth of the Marias River on July 28. The reunited group of 20 men then descended the Missouri under the leadership of Captain Lewis, reaching the mouth of the Yellowstone River and arriving at the approximate present-day boundary of North Dakota on August 7, 1806, only four days behind Captain Clark's group that had come via the Yellowstone. Thus the last members of the Corps of Discovery departed from what is now Montana.