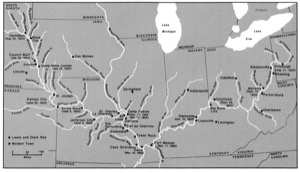 Left Pittsburgh [2] this day at 11 ock with a party of 11 hands 7 of which are soldiers, a pilot and three young men on trial they having proposed to go with me throughout the voyage. [3] Arrived at Bruno's Island [4] 3 miles below    halted a few minutes.    went on shore and being invited on by some of the gentlemen present to try my airgun [5] which I had purchased brought it on shore charged it and fired myself seven times fifty five yards with pretty good success; after which a Mr. Blaze Cenas [6] being unacquainted with the management of the gun suffered her to discharge herself accedentaly    the ball passed through the hat of a woman about 40 yards distanc cuting her temple about the fourth of the diameter of the ball; shee fell instantly and the blood gusing from her temple    we were all in the greatest consternation    supposed she was dead by [but] in a minute she revived to our enespressable satisfaction, and by examination we found the wound by no means mortal or even dangerous; called the hands aboard and proceeded to a ripple of McKee's rock * [7] where we were obleged to get out all hands and lift the boat [8] over about thirty yards; the river is extreemly low; said to be more so than it has been known for four years; about [blank] we passed another ripple near [erasure]    Past another bear or ripple with more dificulty than either of the others    halted for the night much fatiegued after labouring with my men all day— [9]    the water being sufficiently temperate was much in our favor; gave my men some whiskey and retired to rest at 8 OClock—

1. Probably misdated. There is no August 31 entry, and in a letter to Jefferson of September 8, Lewis says he left on the thirty-first. Jackson (LLC), 1:121. (back)
2. Pittsburgh, Allegheny County, Pennsylvania, is located at the point where the Monongahela and Allegheny rivers join to form the Ohio. It became the "Gateway to the West" and in 1800 had a population of 2,400, growing to nearly 5,000 by 1810. Buck & Buck, 75, 94–95, 217. (back)
3. It is impossible to be certain who was with Lewis at this time. Of those who made the entire journey to the Pacific, George Shannon and John Colter may already have joined. The soldiers were probably detached by Lieutenant William A. Murray. The pilot was T. Moore, who was paid seventy dollars to conduct Lewis to the Falls of the Ohio. For expedition members, see Appendix A. Ibid., 107 n. 1, 125–126 n. 1; Cutright (HLCJ), 8 n. 11. (back)
4. Named for Felix Brunot, a French physician who settled in Pittsburgh about 1797, it stands where Chartiers Creek empties into the Ohio from the south. Brunot was reportedly a friend of Lewis, which would explain why he stopped at the island in spite of his hurry. Thwaites (EWT), 4:93 and n. 50; Buck & Buck, 374; Russell (FTT), 44. (back)
5. This weapon, which much impressed the Indians along the expedition's route, was probably manufactured by Isaiah Lukens, horologist and gunsmith of Philadelphia; it was returned to him after Lewis's death in 1809, sold at auction on Lukens's death in 1847, and discovered and identified in 1976. Probably more useful for impressing the natives than for hunting, it had a butt reservoir and was much like a Kentucky rifle in appearance. Stewart (AAGS); Chatters; Halsey; Wolff, 131–32. (back)
6. Blaze Cenas was related by marriage to Felix Brunot, which would explain his presence on Brunot's Island. By 1808 Cenas was living in New Orleans. (back)
7. McKees Rocks is situated in Allegheny County, just north of the mouth of Chartiers Creek; the formation takes its name from Alexander McKee, who owned land in the area before the Revolution. The cutting action of the river left huge overhanging rocks. Espenshade, 224–25. (back)
8. Much of our information on this vessel comes from drawings and measurements in Clark's Field Notes (see below, fig. 7 and accompanying notes). The craft was built in Pittsburgh in July and August of 1803, presumably to Lewis's specifications, and was somewhat modified at the River Dubois, Illinois, camp during the winter of 1803–4. It was fifty-five feet in length, with an eight-foot beam, a thirty-two-foot mast, a shallow draft, and a hold thirty-one feet long. At the stern was a cabin with a deck on top, and there was a ten-foot deck at the bow. As Clark's drawings show, it was basically a galley, little resembing the classic keelboat of the "Western Waters." It does strongly resemble a Spanish river galley of the 1790s illustrated in Nasatir (SWV), frontispiece—apparently a drawing by Clark. This seems to have been a standard type of vessel for use on inland waters, especially for military purposes. See Baldwin (KA), 16–19, 42–45, 162–64, and illustrations opposite 32, 42, 64; Appleman (LC), 49; Lewis to Jefferson, July 15 and 22, September 8, 1803, Lewis to Clark, August 3, 1803, Jackson (LLC), 1:110–17, 121–22; Nicholas Biddle Notes, ca. April 1810, ibid., 2:534. (back)
9. In Allegheny County the information does not allow precise location. (back)
Next