Novr. 15th    took equal altitudes [1]    A. M. 8 59 6—    lost the afternon from clouds which interveened and prevented them    Capt [written over Novr] Clark made a partial survey of the point and asscertained by the Circumferenter [2] and projection that the width of the Ohio from 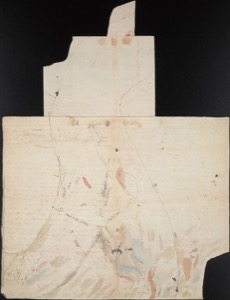 Beinecke Library, Yale University
1. Here the captains made their first efforts to determine latitude and longitude, a task that would occupy considerable time during the expedition. Establishing longitude required the use of a chronometer, an instrument that was still in limited production and extremely costly. Malfunctioning of the chronometer or, more often, neglecting to wind it affected the men's calculations, since they could not reset it with the necessary accuracy in the field. Lewis had received three weeks of instruction in the use of the chronometer and in surveying from Andrew Ellicott, an astronomer and mathematician, and additional training from Robert Patterson, a mathematician. Even so, the accuracy of his and Clark's observations is open to question. Patterson provided Lewis with a handwritten manual for taking astronomical observations (see Astronomy Notebook, Appendix C), and he and Ellicott recommended some published works that were carried with the expedition. Those included Patrick Kelly, A Practical Introduction to Spherics and Nautical Astronomy . . . (London, 1796); The Nautical Almanac and Astronomical Ephemeris . . . (London, 1781–1804), which gave the daily locations of heavenly bodies, perhaps in an American edition; and Nevil Maskelyn, Tables Requisite to be Used with the Nautical Ephemeris for Finding the Latitude and Longitude at Sea (London, 1781). Brown, 208–40; Taylor, 245–63; Wilford, 128–37; Jackson (SBLC), 4–5; Bakeless (LCBE), 336; Cutright (LCPN), 20–21; Jackson (TJ), 176; Bedini (TT), 330–31; Bedini (SILC). (back)
2. The circumferentor, with a "circle of 6 inches diameter," was a plain surveying compass. Lewis and Clark employed it to determine bearings and courses in mapping and to find "the magnetic azimuth of the sun and pole star." See Lewis's description of astronomical instruments, July 22, 1804. Wilford, 174–75; Bedini (TT), 464. The circumferentor may not have been a part of the regular Philadelphia purchase, but it was included in a summary list. Jackson (LLC), 1:96; Bedini (SILC), 63. (back)
Previous
Next