Left our mouring on the Ohio side of the point at 10 OC. and after geting out well into the stream our course, time, and estimated distances were as follow

(1) There is a sand bar that extends about ¾ of a mile from the lower extremity of this Island, and reaches below the junction of the Ohio & Mississippi.    the Island lys in this form—[here a sketch of the island, see fig. 2]    it's greater diameter with the course of the stream; and from the present appeance of the land on the Starbord wif [will?] soon form a part of the main land of that shore tho' at this moment it is devided from it more than a quarter of a mile by a sand beach which has a small chanel of about 30 yards wide at the lower point of Isld. passing through it— 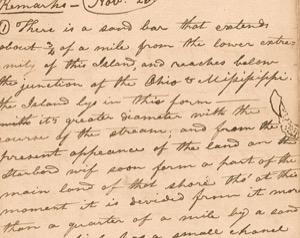 the couse last marked was that of the lower extremity of the Island the uper point bearing a little to the N. of W.—    Came too at 11.45 A. M. on a small sand barr 300 paces from the uper point of this Island, where I made the men take some refreshment and observed the Meridian Altd. of the ☉'s Upper 〈lower〉 Limb to be 67° 29' 53" with my sextant; the Error of which had been previously asscertained to be 8' 45"—. Latd    pr. this obs—    36° 50' 14.9"—    (2) This Island lys close to the main land, and is devided from it by a small channel, the lower point distant 1½ miles from the upper point of the last Island; it is in this form [here a sketch of the island, see fig. 3] with a small island as laid down above it the whole extending 3 miles—    a small distance above the second Iisland there is another lying as above laid down; above which a small distance and two hundred yards from the (3) point which formed the termination of the last course    we came too on the Starbd side and stayed all night: oposite our landing is the lower pt. of an Island on the Larbd.    we came by my estimate 10 ½ miles today. [2] 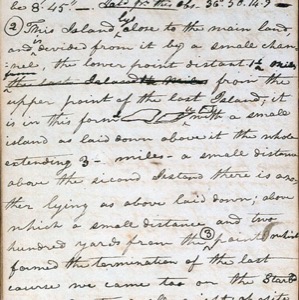 Island, November 20, 1803, Eastern Journal
(American Philosophical Society library
used with permission.)
1. Only the date with no additional writing. The remaining one-half of this page is blank, as if Lewis intended to fill it in later but instead entered "remarks" for the twentieth. With these entires Lewis began shifting course and distance writing from preceding to following the remarks for the day. This edition follows the changing pattern. (back)
2. Camped in Alexander County, Illinois, now started up the Mississippi. (back)
Previous
Next