(1) This is inconsiderable, being ½ m. in length & distant ½ m. from the lower point of (2) another which commences with the last course on the Lad. side, makes a considerable bend to the S. E. and presents a large sand bar along it's border, on the center of the bend of this bar I made the following observation in order to obtain the variation of the nedle— A. M. 9 h 2 m 0 s by Chronometer; Altd. ☉'s L. L. 45° 42' 15" by Sextant; bearing S. 46° 30 E.—    Chronometer too slow as deduced from observation on 16th inst. 24 m 8 1/10 s—    Error of Sextat. 8' 45"—.    this Island continues & after geting above it find it had concealed another about the same magnitude of itself; these islands lye in this form [here a sketch of the island, see fig. 4] (3) Obsered Meridian altd. of ☉'s U. L. 66° 56' 15" with Sext    Error 8' 45—.    having come by estimate 7 miles; from this place observed a large quantity of Misseltoe [1] on the trees bordering on the river, on the main shore Lard. side: in dscending the Ohio I furst observed this plant about the mouth of the Muskingum river; which is the point at which I date the commencement of the fever and Ague & bilious fever, to commence, or become common among the inhabitants of it's borders; it [mistletoe] continued increasing until I arrived at the mouth of the Ohio and sill continues in larger quantities on this than on the Ohio, insomuch that the trees at this place were perfectly loaded with it—    saw a number of black & white pided ducks, [2] shot at them with my rifle and crippled one but could not obtain it, I cannot therefore discribe them so manutely as [I?] could wish    they are about the size of the wood duck,— we shot at two deer [3] today that had come to the river to drink, but got neither of them tho' one was badly wounded—    just below the place of observation the grand bend [4] as it is stiled by the french watermen, commences on the Lard. quarter and continues bearing from S. E. to N. W. about 6 miles; about the center of the hollow of this bend on lard. quarter a byo makes out, and dose not return to the chanel of the river again untill it reaches below Tanslagrass, [5] which is 50 miles below the mouth of the Ohio: from the commencement of this 〈last〉 cours four Islands make their appearance, which compleatly fill the river on the Stard. qutr. as they also do that side of the great bend.—    passed a small Island on the Lad. qtr    came too on an Isd Lad. qtr. about the upr extremity of the grand bend, staid all night.— [6] 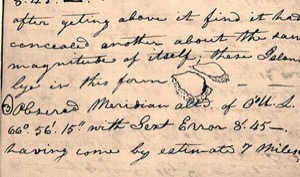 Island, November 21, 1803, Eastern Journal
Library, American Philosophical Society
1. The "Misseltoe" is Phoradendron flavescens (Pursh) Nutt., mistletoe, American or false mistletoe. Fernald, 562; Gleason & Cronquist, 258. (back)
2. Perhaps the bufflehead duck, Bucephala albeola [AOU, 153], one of the smallest ducks. Lewis compares it to the wood duck, Aix sponsa [AOU, 144]. (back)
3. The white-tailed deer, Odocoileus virginianus, with which Lewis was already familiar, since it was found over most of the eastern United States. Hall, 2: 1091–97. (back)
4. This bend lies between Alexander County, Illinois, and Mississippi County, Missouri, a few miles upstream from Cairo. (back)
5. The first letter of this word is smudged and nearly illegible. Possibly it refers to the St. Francis River in southeast Missouri and northeast Arkansas. The word itself is of unknown origin. (back)
6. Apparently this island was near the upstream end of the bend, between Alexander County, Illinois, and Mississippi County, Missouri, near the Scott County, Missouri, line. (back)
Previous
Next