〈Those Numbers will Depend on the probability of an oppisition from roving Parties of Bad Indians which it is probable may be on the [R.? blot]〉

It is a faculty of the Soul, whereby it perceived external Objects, by means of the impressions they make on certain organs of the body. These organs are Commonly reconed 5, Viz: the Eyes, whereby we See objects; the ear, which enables us to hear sounds; the nose, by which we receive the Ideas of different smells; the Palate, by which we judge of tastes; and the Skin, which enables us to feel—the different, forms, hardness, or Softness of bodies. [5] 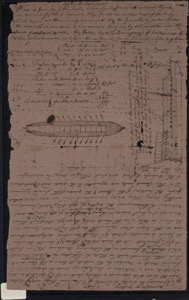 as examples are necessary [7]

Supposeing the party to Consist of 2 Intptrs 4 Non Comd. officers and 21 men and the rules to be observed is Strictly such as Cap. L & C shall from time establish, and a violiation or Disobediance shall be Subject to Such punishment as derected by the articles of War, in like Cases and Such other punishments, as Shall be inflicted by the Sentence of a Court Martial which 〈Shall〉 are to be formed in the following manner, Viz; one Intptr or Sergt. to act as president and at least 1 n Comd. officers & 5 privates members    The Court to Consist of not less then 7 members, 〈in Capital offenses and〉 at other times when Convenient one of the Capts. will preside at the Court    in that Case the Court will have an addition to their number of a presdt. 〈who will have 2 votes〉 (but in all Cases Capt L. & C doe reserve to themselves the right rudcing N C officers at will of inflicting such punishment as they may thing [think] right agreeable to Law at any time which from the nature of the offence & the good of the Service require it)    This Court will act agreeable to the rules and regulations of the Articles of War and Such others as may be established by the Said Cpt L. & C. from time to time.

1. The following material, at right angles to the main body of writing on the page, represents Clark's attempt to figure the amount of time necessary for the expedition. In hoping for a return by the end of 1805, he seriously underestimated the actual length of the voyage. (back)
2. On these "totals going out" there is quite a bit of overwriting and alteration of figures. (back)
3. In this material, upside down to the main body of writing on the page, Clark again tries to figure the number of men needed and their assignments to the different boats. The "Big boat" is the keelboat. (back)
4. The following paragraph begins the reverse of document 7 (printed upside down in Osgood). It appears to have been copied from some other source, perhaps as an exercise in writing by Clark. (back)
5. Here follow two sketches of the keelboat, which are the most important sources of information about that vessel (see fig. 7). The accompanying numbers are Clark's calculation of the amount of lumber necessary to build lockers on the boat. Other modifications may have been carried out at Camp Dubois during the winter. For further information, see above, August 30, 1803, and sources cited there. (back)
6. A key to the keelboat diagram. Clark drew a figure of the "pins to row by" in place of numbers on the last line. (back)
7. These words and the following paragraph are upside down on this page. In the right-hand corner written diagonally in Clark's hand in different-colored ink from the other writing are two apparently irrelevant jottings: [17°?] 27' 15" [and] Puberty. (back)
Previous
Next