Wednesday May 23rd    8 Indians Kick: [Kickapoo] Came to Camp with meat    we recved their pesents of 3 Deer & gave them Whisky:

Set out early    run on a log: under water and Detained one hour    proceeded on the Same Course of last night, (2 miles) passed the mouth of a creek on the Sbd. Side called Woman of Osage River [1] about 30 yds. over, abounding in fish, Stoped one hour where their was maney people assembled to See us, halted at an endented part of a Rock which juted over the water, Called by the french the tavern [2] which is a Cave 40 yds. long with the river 4 feet Deep & about 20 feet high, this is a place the India[ns; hole in paper] & french Pay omage to, many names are wrote up on the rock    Mine among others, at one mile above this rock coms in a small Creek called Tavern Creek, [3] abov one other Small Creek, [4] camped at 6 oClock [5] (after expirencing great dificuselty in passing Some Drifts) [6] on the Stb Side, examined the mens arms    found all in good order except the Detachment of Solds [soldiers] in the Perogue—    R Field Killed a Deer. 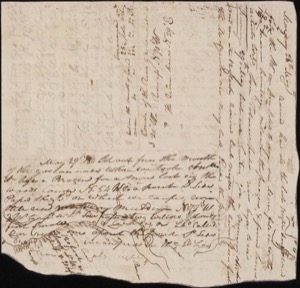 May 23rd    Course of last night S: 75 W    Contined 2 miles to the Said point St. Side    passed the upper Point of the Island    Thence S 52° W. 〈9〉 7 Miles to a pt. on St. Sd. passing Tavern Island    two Small Isd. in a bend to the St: side    the Mo: of Oge womans River at 1 m:    the Cave Called the Tavern, Lbd Side at 5 [or 4?] m: Situated in the Clifts, opposit a Small Island on the Stbd Side (R. & Jo: Fields came in) with many people, passed the Tavern Cave, Capt Lewis' assended the hill which has peninsulis projecting in raged points to the river, and was near falling from a Peninsulia hard water all Day    Saved himself by the assistance of his Knife, passed a Creek 15 yds. wide at 1 mile called Creek of the Tavern on the Lbd. Side, Camped opposit the pt. which the Last Course was to.    one man Sick.

We Set out early    ran on a Log and detained one hour, proceeded the Course of Last night 2 Miles to the mouth of a Creek on the Stbd. Side Called Osage Womans 〈Creek〉 R, about 30 yds. wide, opposit a large Island and a [NB: (american)] Settlement. [8] (on this Creek 30 or 40 famlys are Settled,[)] Crossed to the Settlemt. and took in R & Jo: Fields who had been Sent to purchase Corn & Butter &c.    many people Came to See us, we passed a large Cave on the Lbd. Side 〈Called by the french the Tavern〉 [9] about 120 feet wide 40 feet Deep & 20 feet high    many different immages are Painted on the Rock at this place.    the Inds & French pay omage.    many nams are wrote on the rock, Stoped about one mile above for Capt Lewis who had assended the Clifts which is 〈about〉 at the Said Cave 300 fee high, hanging over the Water, the water excessively Swift to day, we incamped below a Small Isld. in the Meadle of the river, Sent out two hunters, one Killed a Deer

This evening we examined the arms and amunition    found those mens arms in the perogue in bad order    a fair evening    Capt. Lewis near falling from the Pencelia of rocks 300 feet, he caught at 20 foot.

Wednesday 23rd.    At 6 o'clock in the morning we proceeded on our voyage with pleasant weather. Passed the mouth of the Osage [10] river on the south side, about a mile and an half below the Tavern Cave, a noted place among the French traders. One mile above this is the Tavern Creek. We encamped this evening on the south side of the river, and had our arms and ammunition inspected.

Wednesday 23rd May 1804. [11]    a fair morning.    we Set out 6oClock A. m. and proceeded on verry well.    passed Some Inhabitants called boons Settlement.    passd. a noted [p]lace called cave tavern in a clift of rocks on South Side, which is 120 feet long 20 perpinticular high [illegible] us    inspected our arms and camped.

Wednesday May 23rd    We embarked this morning at 6oClock, having fair weather, and proceeded on very well, and passed some Plantations, which is called Boons settlement lying on the North side of the River.    This settlement was made by Colonel Daniel Boone, the person who first discover'd Kentucky, & who was residing at this place, with a number of his family and friends.— [12]

Wednesday May 23rd    A pleasant Morning & We proceed on our Voyage, and crossed the River to the So. side and passed by a noted place which is called Cave Tavern, which is in a Clift of Rocks, 120 feet long, and 20 feet perpendicular, laying on the South side of the River; In the evening our officers inspected our Arms and accoutrements.

1. Femme Osage (Osage Woman's) River, in St. Charles County, Missouri. See fig. 9. MRC map 3. (back)
2. Sergeant Ordway calls this cave the "Corn Tavern," suggesting its use as a cache by trappers and traders. Tavern Rock lies in present Franklin County, Missouri, and probably took its name from its use as a rest stop for river travelers. See fig. 9. MRC map 3; Thwaites (EWT), 6:35; Osgood (FN), 44 n. 6. (back)
3. Tavern Creek is in Franklin County; it does not appear by name in fig. 9. MRC map 3. (back)
4. Probably Little Tavern Creek, just above Tavern Creek in Franklin County. MRM map 8. (back)
5. According to the journals, in St. Charles County . Fig. 9, however, appears to show this camp on the opposite side of the Missouri in Franklin County a mile or more upstream from Tavern Creek. MRC map 3. (back)
6. Collections of driftwood. Criswell, 34. (back)
7. This entry in the Field Notes for May 23 is on a sheet (document 14) different from the first (document 13). It is not clear which was composed first. (back)
8. This community, which apparently never formally constituted a town, was Boone's Settlement, in the vicinity of Matson, St. Charles County . The colony of Kentuckians was named for Daniel Boone, who came there in 1799 and received a grant of 1,000 arpents of land from the Spanish government, having been preceded there by his son, Daniel Morgan Boone, in 1797. The old frontiersman was appointed judge and commandant of the Femme Osage district in 1800 and held the post until the American takeover. The site of his cabin is a few miles northwest of Matson, in southwest St. Charles County . Thwaites (LC), 1:27 n. 1; Houck, 2:93–94; Missouri Guide, 362–65; Bakeless (LCPD), 360–64. (back)
9. The words in angle brackets were apparently crossed out by Biddle. Just before "Called" is what appears to be an L-shaped bracket, probably also intended to call attention to the deletion of the phrase. (back)
10. McKeehan's note: "Perhaps Little Osage." McKeehan's information, here as in many other instances, is based on pre-Lewis and Clark knowledge of the trans-Mississippi region. It is Femme Osage River, St. Charles County, Missouri. (back)
11. The first entry for this day is from the original journal; the fair copy has two entries for the day. (back)
12. This is the clearest statement in any of the journals that Boone was actually in residence at his settlement at the time the party passed by. None of the journals, including this one, indicates that they actually met him, which is odd since he already had the slightly exaggerated reputation of the man who "first discover'd Kentucky." Perhaps Whitehouse's scribe elaborated unjustifiably on Whitehouse's information. (back)
Previous
Next