12th August Sunday 1804    a South wind    We Set out early    the river wider than usial, and Shallow, at 12 we halted in a bend to the left to take the Meridian altitude, & Dine, & Sent one man across where we took Dinner yesterday to Step off the Distance across Isthmus, he made it 974 yards, and the bend around is 18¾ miles above this bend about 4 miles, a yellow & Brown Bluff Comnuces and Continus 3 or 4 miles on the L. S.    this Bluff has Some Sand Stone, Some rich Black mole [mold] mixed with yellow Clay, [2] a fiew Red Ceeder [3] on the tope, which is 〈about〉, from 20 to 150 foot high    the hill Still riseing back, I think may be estemated at 200 foot    on the top is timber, the wind for a few hours this evening was hard and from the S. E.    In the evening about 5 oClock Cap. L. & My Self wen on Shore to Shoot a Prarie wolf [4] which was barking at us as we passed [5] This Prarie Wolf barked like a large fest [feist] and is not much larger, the Beaver is verry plenty, not with Standing we are almost in Sight of the Mahar Town—    Cought a verry Large Catfish this morniong, prepared the Indian present which we intend given to the Mahars.    P. Wiser apt. Cook to Serjt: Floyds Squad from to day [6] 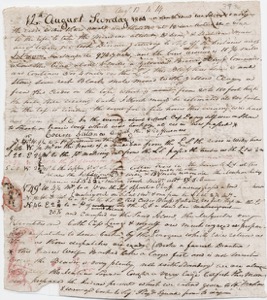 Set out early under a gentle Breeze from the South    the river wider than usial and Shallow    (1) at 12 oClock we halted to take a meridian altd. of the Sun & Sent a man back or I may Say across to the Bind of the river where Capt. Lewis took the Mdn. altitude yesterday, to Step off the distance, he made it 974 yards across, the Distance arround the bend is 18¾ miles—    about 4 miles above the bend on the L. S. is the Commencement of a Bluff which is about 4 miles extending on the river, of yellow and brown Clay    in Some parts in it near the river a Soft Sand Stone is inbeded on the top (which is from 20 to 150 feet above the water, & rises back) is Covered with timber, a fiew red Ceider is on this Bluff, the wind Comes round to the S. E.    a Prarie Wolf Come near the bank and Barked at us this evening, we made an attempt but could not git him, this Animale Barkes like a large feste Dog. Beever is verry Plenty on this part of the river. I prepare Some presents for to give the Indians of the Mahars nation. Wiser apt. Cook & Supentdt. of the Provisions of Sergt. Floyds Squad.    we Camped on a Sand Island in a bend to the S. S.    Musquitors verry troublesom untile the wind rose.    at one or 2 oClock

On the Larboard shore in the center of a bend, being North, and measurement 974 yards from the Lard. Shore opposite to the point of observation of yesterday.

Sunday 12th.    We embarked and got under way before day light. The musketoes last night were worse than I ever experienced. We went round a bend, of eighteen miles, the neck of which was only 974 yards across; passed high bluffs of yellow clay on the south side of the river and low land on the north; and encamped on a sand island.

Sunday August 12th    This morning we Started early with a fair wind from the South, We found by one o'Clock P. M. that we had sailed 21 Miles from 12 oClock the 11th to 12 o'Clock, this day and only gained 914 Yards on our direct course.—

We continued Sailing 'till the evening and encamped on the South side of the River, having Sailed 21 Miles this day.—

1. Biddle's notation at the head of this sheet of the Field Notes (document 42) reads, "Aug. 12 to 14." (back)
2. The "stone" exposed below the mouth of the Little Sioux consists of shales and some limestone of Cretaceous age. (back)
3. Eastern red cedar. (back)
4. A coyote, Canis latrans, one of the most characteristic western animals, then little known to science. Apparently they did not actually get a specimen until September 18, 1804. Cutright (LCPN), 85; Hall, 2:924–28. (back)
5. Clark used an asterisk as a reference to a continuation of the narrative after the courses and distances. The material is brought together for ease of reading. (back)
6. John B. Thompson had previously held this position in Floyd's squad (see above, July 8, 1804). Apparently he had proved unsatisfactory. (back)
7. Clark wrote this course and description in red ink or chalk. There are also some numbers (40, 8, and No. 12) in red and the profile of a boy under the text (fig. 16). (back)
8. In either Monona or Woodbury County, Iowa, near the county line. Atlas map 15; MRC map 27; MRR maps 73, 74. (back)
9. Another indication that they still intended to send back Corporal Warfington's squad in the near future. In fact, they did not do so until April 7, 1805. There are some figures to the side of the course material and the text that follows it:
(back)
10. Lewis's observation from Codex O. (back)
11. Eastern red cedar, Juniperus virginiana L. (back)
12. Clark has 973 yards, Gass 974. (back)
Previous
Next