This morning early we employed all hands; some were making tar or attempting to make it, others were attatching the skins on the boat, other cuting and fiting the bark for lining puting in the woodworke &c    some hunters [1] were sent out to kill buffaloe in order to make pemecon to take with us and also for their skins which we now wa[n]t to cover our baggage in the boat and canoes when we depart from hence.    the Indians have informed us that we should shortly leave the buffaloe country after passing the falls; this I much regret for I know when we leave the buffaloe that we shal sometimes be under the necessity of fasting occasionally.    and at all events the white puddings will be irretreivably lost and Sharbono out of imployment.    our tar-kiln which ought to have began to run this morning has yealded no tar as yet and I am much affraid will not yeald any, if so I fear the whole opperation of my boat will be useless. I fear I have committed another blunder also in sewing the skins with a nedle which has sharp edges these have cut the skin and as it drys I discover that the throng dose not fill the holes as I expected tho' I made them sew with a large throng for that purpose.    at 10 OCk A. M. we had a slight shower which scarcely wet the grass. One buffaloe only and 2 Antelopes killed today six beaver and 2 otter have been killed within the last three days. The current of the river looks so gentle and inviting that the men all seem anxious to be moving upward as well as ourselves.    we have got the boat prety well forward today and think we shall be able to complete her tomorrow except paying her, [2] to do which will require some little time to make her first perfectly dry.    she has assumed her shape and looks extreemly well. She will be very light, more so than any vessel of her size that I ever saw. 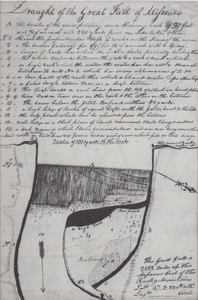 Observed Equal altitudes of the ☉ with Sextant.

all of party employd in Sowing the Skins to the boat, burning Tare, preparing timber, hunting buffalow for their meat & Skins, drying & repacking the Stores, Goods &c. &c.    at 1 oClock began to rain.    in the evening the hunters killed two antilopes & a Buffalow.

A fine morning    wind from the S. W    all the party employd, Some about the boat, attaching the Skins & Sowing them to the Sections, others prepareing timber, Some, burning tar of the drift pine, Some airring and repacking the Stores & Goods, & others hunting for Meet to make pemitigon & for the use of their Skins to Cover the Canoes & boat,—.   a Small Shower at 1 oClock which did Scercely wet the grass—.    one buffalow and two Antilopes Killed this evening. Six beaver & 2 orters has been Killed at this camp within a fiew days    we discover no fish above the falls as yet—    the only timber in this part of the Countrey is willow, a fiew Cotton trees which is neither large nor tall, Boxalders and red wood. (Bois roche arrow wood) 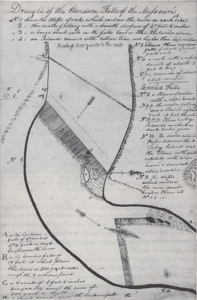 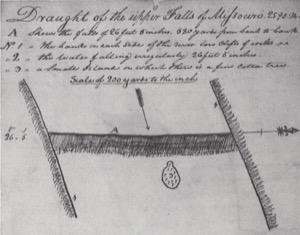 The water tolerably clear and Soft in the river, Current jentle and bottoms riseing from the water; no appearance of the river riseing more than a few feet above the falls, as high up as we have yet explored.    but few trees on the Std Side the grass is high and fine near the river.    the winds has blown for Several days from the S. W. I think it possible that those almost perpetial S W. winds, proceed from the agency of the Snowey mountains and the wide leavel and untimbered plains which Streach themselves along their borders for an emence distance, that the air comeing in Contact with the Snow is Suddenly chilled and condensed, thus becomeing heavyer than the air beneath in the plains    it glides down the Sides of those mountains and decends to the plains, where by the constant action of the Sun on the face of the untimbered country there is a partial vacuom formed for it's reception    I have observed that the winds from this quarter is always the Coaldest and most violent which we experience, yet I am far from giveing full credit to this hypothesis on this Subject; if I find however on the opposit Side of these mountains that the winds take a contrary direction I Shall then have full faith. (The winds take a contrary direction in the morning or from the mountains on the west Side) [5]

July 3rd Wednesday 1805.    a clear pleasant warm morning. Sergt. Gass and 4 men [6] Set out to go down the River and take a view of the falls and Big Spring &.C. the men at Camp employed Some at makeing tar or pitch for the Boat others puting the leather on it &C.    we over halled the Baggage and killed a large curious kind of a rat [7] with hair on his tail.    the mice are pleanty also.    light Sprinklings of rain in the afternoon.    we fixed Scaffels and put our Baggs &C from the ground, & a little more from the rats & mice &C. Some men Sowing the leather on the Iron boat.    the men not other ways directed are dressing Skins to make themselves mockinsons as they have wore them all out in the plains    one pair of good mockins will not last more than about 2 days. will ware holes in them the first day and patch them for the next.—    George Drewyer one of Capt. Lewis hunters at the upper Camp killed 2 large handsom otter and three beaver.    2 men went out a short distance that evening and killed a fat buffalow. Some men out for meat &.C.    the 2 men returned from the falls and had killed 6 buffalow, and Saved only the tongues, & brains for to dress Skins.    we got the leather on the Iron boat in 8 seperate Sections & put them in the water to Sook. 2 men attempting to burn a Small tar kill.

Wednesday 3rd.    A fine morning. I was so engaged with the boat, that I had not visited the falls. I therefore set out with one of the men to day for that purpose. I found the 2nd pitch the most beautiful, though not the highest. [8] About a mile below the upper pitch, [9] the largest and most beautful spring [10] rises out of the bank of the Missouri on the south side that I ever beheld. We had a light shower of rain. During this excursion I saw more buffaloe than I had seen in any day previous: we killed 7 of them before we returned to camp. We also saw 25 wolves in one gang or pack.

July 3rd Wednesday 1805.    a clear pleasant morning.    Sergt. Gass and 2 men Set out to go down and See the falls & large Spring &c.    the men at employed puting the leather on the Iron boat &c.    Some burning tar to put on it.    We overhalled the Baggage and found Some mice & killed a large curious rat with hair on his tail.    we fixed Scaffels to keep the Bags &c from the ground and from the rats.    a light Sprinkling of rain in the afternoon.    George Drewyer Capt. Lewis' hunter at the upper Camp killed 2 large handsom otter and three beaver.    in the evening 2 men went out a Short distance from Camp and killed a fat buffalow.    Some men went for meat.    Sergt. Gass and the man returned from the falls, had killed Six buffalow and Saved only the brains and tongues.    we got the leather on the Iron boat, and took it apart.    8 Seprt. Sections—    (2 men burning a tar kill)

Wednesday July 3rd    A Clear pleasant morning, A Serjeant and 2 Men set out from Camp to go down to the falls, & large Spring, & to hunt, The Men in Camp were employ'd in putting the leather on the Iron boat, burning tarr to pay the Seams &ca    We likewise overhawled the baggage, we found some Mice among it and kill'd a curious kind of a Rat, which was very large, and had hair growing on its Tail, & we fixed Scaffolds to keep the Bags &ca from the ground, and from Rats, We had a light shower of rain in the afternoon.    One of our hunters killed at the upper end of our Camp, 〈killed〉 2 large handsome Otters, and 3 Beaver.    In the Evening 2 of our Men went out a short distance from Camp, and killed a fat buffalo, and some of our party was sent after the Meat, which they brought to us, The Serjeant and 2 Men that went with him returned towards night; they had killed 6 Buffalo and saved the tongues & Brains only, the latter being wanted to dress Deer leather, with.    We fixed the leather on the Iron boat, & then took the boat apart, she had 8 Sections of 4 feet each—

1. Including Drouillard, according to Whitehouse and Ordway. (back)
2. Smearing the boat with pitch or tar to make it waterproof. (back)
3. This observation follows the entry of July 9, 1805, in Lewis's Codex E, and is here placed under the correct date. (back)
4. This is the last daily entry in Voorhis No.1. (back)
5. At this point in Voorhis No.1 are three pages of sketch maps of the falls of the Missouri (figs. 5, 6, 7), followed by an entry for May 31, 1805, which has been placed according to date, and a brief description of part of the Great Falls portage, placed at the end of the special entry of June 17–19, 1805. (back)
6. Gass says one man, apparently Hugh McNeal. Whitehouse counts two others. Lewis notes "several others." (back)
7. Probably the pack rat, or bushy-tailed woodrat, Neotoma cinerea, noted by Lewis on July 2. (back)
8. Crooked Falls, Cascade County, Montana, if Gass ordered the different falls in the same way as the captains. (back)
9. Black Eagle Falls, Cascade County. (back)
10. Giant Springs; see Gass's entry of June 29. (back)
Previous
Next