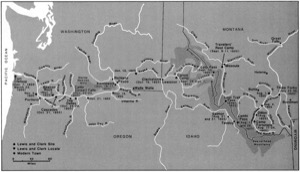 My friend Capt. Clark was very sick all last night but feels himself somewhat better this morning since his medicine has opperated. [1] I dispatched two men early this morning up the S. E. Fork to examine the river; and permitted sundry others to hunt in the neighbourhood of this place. Both Capt. C. and myself corrisponded in opinion with rispect to the impropriety of calling either of these streams the Missouri and accordingly agreed to name them after the President of the United States and the Secretaries of the Treasury and state having previously named one river in honour of the Secretaries of War and Navy. In pursuance of this resolution we called the S. W. fork, that which we meant to ascend, Jefferson's River in honor of 〈that illustrious personage〉 Thomas Jefferson. [NB?: the author of our enterprise,] [2]    the Middle fork we called Madison's River in honor of James Madison, and the S. E. Fork we called Gallitin's River in honor of Albert Gallitin. [3]    the two first are 90 yards wide and the last is 70 yards.    all of them run with great valocity and thow out large bodies of water. Gallitin's River is reather more rapid than either of the others, is not quite as deep but from all appearances may be navigated to a considerable distance. Capt. C. who came down Madison's river yesterday and has also seen Jefferson's some distance thinks Madison's reather the most rapid, but it is not as much so by any means as Gallitan's.    the beds of all these streams are formed of smooth pebble and gravel, [4] and their waters perfectly transparent; in short they are three noble streams.    there is timber enough here to support an establishment, [5] provided it be erected with brick or stone either of which would be much cheaper than wood as all the materials for such a work are immediately at the spot.    there are several small sand-bars along the shores at no great distance of very pure sand and the earth appears as if it would make good brick. [6] I had all our baggage spread out to dry this morning; and the day proving warm, I had a small bower or booth erected for the comfort of Capt. C.    our leather lodge when exposed to the sun is excessively hot. I observe large quantities of the sand rush in these bottoms which grow in many places as high as a man's breast and stand as thick as the stalks of wheat usually do. this affords one of the best winter pastures on earth for horses or cows, and of course will be much in favour of an establishment should it ever be thought necessary to fix one at this place.    the grass is also luxouriant and would afford a fine swarth of hay at this time in parsels of ma[n]y acres together. [7]    all those who are not hunting altho' much fatiegued are busily engaged in dressing their skins, making mockersons lexing [leggings] &c to make themselves comfortable.    the Musquetoes are more than usually troublesome, the knats are not as much so. [8]    in the evening about 4 O'Ck the wind blew hard from South West and after some little time brought on a Cloud attended with thunder and Lightning from which we had a fine refreshing shower which cooled the air considerably; the showers continued with short intervals untill after dark.    in the evening the hunters all returned they had killed 8 deer and 2 Elk.    some of the deer wer in excellent order.    those whome I had sent up Gallitin's river reported that after it passed the point to which I had seen it yesterday that it turned more to the East to a considerable distance or as far as they could discover the opening of the Mountains formed by it's valley which was many miles.    the bottoms were tolerably wide but not as much so as at or near it's mouth.    it's current is rappid and the stream much divided with islands but is sufficiently deep for canoe navigation. Our present camp is precisely on the spot that the Snake Indians were encamped at the time the Minnetares of the Knife R. first came in sight of them five years since.    from hence they retreated about three miles up Jeffersons river and concealed themselves in the woods, the Minnetares pursued, attacked them, killed 4 men 4 women a number of boys, and mad prisoners of all the females and four boys, Sah-cah-gar-we-ah or Indian woman was one of the female prisoners taken at that time; tho' I cannot discover that she shews any immotion of sorrow in recollecting this events, or of joy in being again restored to her native country; if she has enough to eat and a few trinkets to wear I believe she would be perfectly content anywhere.—

Point of observation No. 39.

At our encampment on Camp Island, near the junction of the three forks of the Missouri.

I was verry unwell all night, Something better this morning, a very worm day untill 4 oClock when the wind rose & blew hard from the S W. and was Cloudy, The Thermometr. Stood at 90° above 0 in the evening a heavy thunder Shower from the S W. which continud at intervales untill after dark, Several deer killed to day    men all employed dressing Skins for Clothes & Mockersons, two men went up the East fork & reports that it is nearly the Size of the N. fork, verry rapid & has maney Islands. Our present Camp is the prosise Spot the Snake Indians were Camped at the time the Minetarries came in Sight, attacked & killed 4 men 4 women & a number of boys, & made prisoners of all the females & 4 boys.

July 28th Sunday 1805.    a foggy morning, but clear after. Several men went out a hunting.    we put out the baggage to air. Capt. Clark Sick.    we built a bower for his comfort.    the party though much fatigued are engaged dressing Skins to make themselves cloaths and mockasons &C.    towards evening the hunters all returned    had killed 7 or 8 deer and 2 Elk. Some of the buck deer were fat.    one of the hunters who had been up the South fork a Short distance, and found it not so large as the West & N. forks.    we conclude to proceede up the North fork to the Mountains.    towards evening we had a fine Shower of rain    Some Thunder attended it which cooled the air verry much.    the men at Camp all employed dressing their Skins &C.—    rushes along here.

Sunday 28th.    As this was a fine day, the men were employed in airing the baggage, dressing skins and hunting. Capt. Clark still continued unwell. Our squaw informed us, that it was at this place she had been taken prisoner by the Grossventers 4 or 5 years ago. [9] From this valley we can discover a large mountain with snow on it, towards the southwest; [10] and expect to pass by the northwest end of it. Capt. Lewis had a meridian altitude here, which gave 45° 22 34.5" north latitude. We also remained here the 29th, which was a fine day, and the men chiefly employed in the same way. Capt. Clarke is getting better.

Sunday 28th July 1805.    a foggy morning but clear.    Several men went out eairly a hunting.    we put out all the baggage to air.    Capt Clark verry unwell.    we built a bowrey for his comfort.    the party in general much fatigued.    Several lame, with Sore feet &c.    towards evening the hunters all returned.    had killed 7 or 8 Deer Some of them fat bucks.    one of them who had been a Short distance up the South fork & found it not as large as the middle or west & North forks, which are near of a Size.    in the evening we had a fine Shower of rain.    Some Thunder attended it, which cooled the air much.    the men at Camp has employed themselves this day in dressing Skins, to make cloathing for themselves.    I am employed makeing the chief part of the cloathing for the party.    two Elk killed to day also—

Sunday July 28th    We had some fog early this morning, but it cleared away at Sun rise, & the weather was pleasant, several of our party went out a hunting, and the remainder was employed in Airing the Baggage &ca.—    Captain Clarke continued still very sick,—    part of our Men were taken off, from the Baggage &ca. in order to build a bowry, for his accomodation 〈of Captain Clark〉, which they soon compleated,—    The Men that were hawling the Boats along with the tow lines, for several days past are much fataigued; & some of them lame from Cuts they got in their feet in passing rockey & stoney parts of the Shores.—    towards the evening the party that had went out hunting returned.    They had killed 8 Deer, some of which were very fat.    One of that party mentioned that he had been up the North, & West (or middle fork of the River Mesouri,) and mentioned that those two rivers, appeared to him to be nearly one width.    In the evening, we had a fine shower of rain, accompanied with Thunder, which cooled the Air, & made it very pleasant, The Men at our Camp, were 〈Airing〉 employed in drying the Baggage &ca 〈was drying, employed themselves in〉 & dressing of Skins to make themselves Cloathing.—    I was employed in making chief part of the Cloathing for the whole party.—    Our Hunters killed also 2 Elk, which was brought into our Camp.—

1. See July 26, 1805, and Chuinard (OOMD), 302–4. (back)
2. It may have been Biddle who also marked through the preceding passage, "that illustrious personage," both in pencil. (back)
3. The rivers still retain the names applied by Lewis and Clark. See July 27, 1805, concerning names of the three forks. (back)
4. These rivers all have steep gradients and they and their tributaries head in the mountains where there is an abundant source of rock. The gravel beds of these streams are a consequence of these gradients and the nearness of the source of rock. (back)
5. Pierre Ménard and Andrew Henry of the Missouri Fur Company built a post at the Three Forks in 1810, either at Lewis's recommended site between the Madison and the Gallatin or, more likely, near the Corps of Discovery's campsite on the east bank of the Jefferson. Almost certainly it was not of brick or stone. The post proved impossible to maintain because of Blackfeet hostility. John Potts was killed nearby in 1808 while trapping with John Colter, and George Drouillard also died in the vicinity at the hands of the Blackfeet in 1810, while working for the Missouri Fur Company. In the same area John Colter had a series of narrow escapes from the Blackfeet, including his famous naked run from the Jefferson to the Madison on the occasion of Potts's death. Appleman (LC), 328–32; Oglesby, 93–96; James, 29–48; Harris; Atlas map 65. (back)
6. The Three Forks valley is underlain by Tertiary continental deposits. Some of these deposits contain excellent clay for making pottery or brick. (back)
7. The sandrush, scouring rush, Equisetum hyemale L. Sandrush refers to the habit of this plant of growing vigorously on river floodplains when periodic floods deposit sand on top of the plants, and due to their rhizomatous habit, grow and reproduce abundantly as described. Hitchcock et al., 1:41. The grass is probably a mixture of native grasses, sedges, and rushes commonly found growing in the wet meadows adjacent to the river floodplain. Perhaps it was Biddle who drew a red vertical line through the first part of this passage. (back)
8. The mosquitoes are Aedes vexans and the gnats are probably the buffalo gnat, Simulium sp. (back)
9. See Lewis's reflections on this information on this date. (back)
10. The Tobacco Root Mountains. (back)
Previous
Next