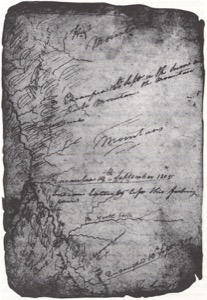 began to Snow about 3 hours before Day and Continud. all day    the Snow in The morning 4 Inches deep on The old Snow, and by night we found it from 6 to 8 Inches deep    I walked in front to keep the road and found great dificuelty in keeping it as in maney places the Snow had entirely filled up the track, and obliged me to hunt Several minits for the track    at 12 oClock we halted on the top of the mountain [2] to worm & dry our Selves a little as well as to let our horses rest and graze a little on Some long grass which I observed, (on) The South 〈Knobs〉 Steep hills Side & falling timber Continue to day, and a thickly timbered Countrey of 8 different kinds of pine, [3] which are So covered with Snow, that in passing thro them we are continually covered with Snow, I have been wet and as cold in every part as I ever was in my life, indeed I was at one time fearfull my feet would freeze in the thin mockersons which I wore, after a Short delay in the middle of the Day, I took one man and proceeded on as fast as I could about 6 miles to a Small branch passing to the right, halted and built fires for the party agains their arrival which was at Dusk verry cold and much fatigued    we Encamped at this Branch in a thickly timbered bottom which was Scercely large enough for us to lie leavil, [4] men all wet cold and hungary. Killed a Second Colt which we all Suped hartily on and thought it fine meat.

I saw 4 Black tail Deer to day before we Set out which came up the mountain and what is Singular Snaped 7 tims at a large buck.    it is Singular as my gun has a Steel frisen [5] and never Snaped 7 times before    in examining her found the flint loose    to describe the road of this day would be a repitition of yesterday excpt the Snow which made it much wors to proseed as we had in maney places to derect our Selves by the appearance of the rubbings of the Packs [6] against the trees which have limbs quiet low and bending downwards

Monday 16th Sept 1805.    when we a woke this morning to our great Surprize we were covred with Snow, which had fell about 2 Inches deep the later part of last night, & continues a cold Snowey morning. Capt. Clark Shot at a deer but did not kill it.    we mended up our mockasons and Set out without any thing to eat, and proceeded on    could Scarsely keep the old trail for the Snow.    kept on the Mountn. rather descending more than ascending.    about one oClock finding no water we halted [7] and melted Some snow and eat or drank a little more Soup, and let our horses graze about one hour and a half then proceeded on. Saw considerable of old snow    passed several bald knobs and high points of rocks &C.    towards evening we descended a Mountain down in to a deep cove where we Camped on a small creek in a thicket of Spruce pine and balsom fer timber.    the Snow is now about 4 Inches deep on a levl.    we came about 15 miles this day.    the clouds So low on the Mount that we could not See any distance no way.    it appeared as if we have been in the clouds all this day.    we all being hungry and nothing to eat except a little portable soup which kept us verry weak, we killed another colt & eat half of it.

Monday 16th.    Last night about 12 o'clock it began to snow. We renewed our march early, though the morning was very disagreeable, and proceeded over the most terrible mountains I ever beheld. It continued snowing until 3 o'clock P. M. when we halted, took some more soup, and went on till we came to a small stream where we encamped for the night. Here we killed another colt and supped on it. The snow fell so thick, and the day was so dark, that a person could not see to a distance of 200 yards. In the night and during the day the snow fell about 10 inches deep.

Monday 16th Sept. 1805.    when we awoke this morning to our great Surprise we were covred with Snow which had fallen about 2 Inches the latter part of last night, and continues a verry cold Snow Storm.    Capt. Clark Shot at a deer but did not kill it.    we mended up our mockasons.    Some of the men without Socks raped rags on their feet, and loaded up our horses and Set out without any thing to eat, and proceeded on.    could hardly See the old trail for the Snow.    kept on the ridge of the mountain    Several high knobs to pass over but had more down hill than up.    about one oClock finding no water we halted and melted Snow and made a little more Soup, and let our horses graze 1 hour & a half.    then proceeded on    the Snow is fell So fast that it is now in common 5 or 6 Inches deep.    Some places is considerable of old Snow on the moutn.    towards evening we descended the mountain down in a lonesome cove [8] on a creek where we Camped in a thicket of Spruce pine & bolsom fir timber.    all being tired & hungry, obledged us to kill another colt and eat the half of it this evening.    it has quit Snowing this evening, but continues chilley and cold.    Came about 15 [9] miles to day over a rockey rough road.    Some places bare on the top high places of rocks &c.

Monday Septemr 16th    We were all surprized when we awoke this morning; to find ourselves covered with Snow, which was 2 Inches deep & had fallen in the latter part of last night & it still continuing to Snow.    Captain Clark went out with his Gun & shot a deer on the Mountain but did not get it.—    The Snow storm continued and the Men were employed in mending up their Moccasins.    some of our party are without Socks, and are forced to wrap Rags round their feet to keep out the cold.    We loaded up our Horses, & set out not having anything for to eat, We proceeded on our way, but had great difficulty to follow the Indian trail on account of the Snow that had fell, we still continued on our Journey, along the ridge of the Mountain; and we had several of the Nobs of the Mountain to pass over, but all the way on a descent, about 1 o'Clock P. M we finding no Water we halted, & melted some Snow & made some portable Soup for our party, and turned out our horses to Graze about One hour & a half    The Snow fell so fast that it is now from 5 to 6 inches deep & where old the Snow remained it was considerably deeper, towards evening, we descended the mountain; down into a lonesome looking Cove on to a Creek, where we encamped in a thicket of spruce Pine timber.    The party were all much fataigued & hungry, our officers had a Colt killed and the party eat the half of it this evening.    In the evening it quitted snowing, but the wind was very chilly & Cold, We came about 15 Miles this day & passed over a rough & rockey road, & on the tops of rocks which were quite bare.—

1. The bracketed material is from Thwaites (LC), 3:70, as it is not apparent on the damaged page of the Elksin-bound Journal. (back)
2. Perhaps on Spring Hill (or Spring Mountain), in northern Idaho County, Idaho, not marked on fig. 6 or Atlas map 70. Space, 10. (back)
3. Clark uses the general term "pine" for all the types of evergreen conifers. The species include: lodgepole pine, Douglas fir, subalpine fir, Engelmann spruce, whitebark pine, Pinus albicaulis Engelm., grand fir, Abies grandis (Dougl.) Lindl., western larch, and mountain hemlock, Tsuga mertensiana (Bong.) Carr. Other possibilities at lower elevations are: ponderosa pine, western white pine, Pinus monticola Dougl., and western redcedar, Thuja plicata Donn. Space, 10–11; Cutright (LCPN), 203–4; Little (CIH), 43-W, 6-W, 62-W, 93-W, 90-W; Daubenmire, 301, 314–15; Pfister et al., 17. (back)
4. Near the rock mounds later called Indian Post Office (which none of the journalists mentions), perhaps on Moon Creek, Idaho County. Space, 10; Peebles (LT), 6; Cutright (LCPN), 205 n. 14; Atlas map 70. (back)
5. The frizzen is the upright piece of metal against which the flint in a flintlock firearm strikes to produce the spark that fires the powder. The repeated misfires were probably due to the wet conditions as well as the loose flint. Russell (GEF), 288–89. (back)
6. The packs of the Indians who had passed by, going east or west. There is a blank half-page following this entry. The next entry starts at the top of a new page (p. 116) in Codex G. (back)
7. Perhaps on Spring Hill, Idaho County, Idaho. (back)
8. Another designation unique to Whitehouse. (back)
9. The words "about 15" appear to have been squeezed into a blank space and perhaps written by another person. (back)
Previous
Next