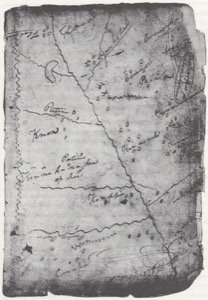 a fair morning after a Cold night. Some frost this morning and Ice. Several hunters out Saw nothing    Capt Lewis assended the hills & Saw Mountain a head bearing S. E. & N W.    a high point to the west. [2] Plain wavering. Set out at 3 oClock—

a far morning    Sent out hunters to hunt in the plains, about 10 oClock they returned and informed that they could not See any Signs of game of any kind    Capt Lewis walked on the plains and informs that he could plainly See a rainge of mountains which bore S. E. & N. W. the nearest point south about 60 miles, and becoms high toward the N. W. The plaines on each Side is wavering. Labiesh killed 2 gees & 2 Ducks of the large kind.    at two oClock we loaded & Set out, our Powder & Provisions of roots not Sufficently 〈wet〉 dry.    〈but〉 we Shall put them out at the forks or mouth of this river which is at no great distance, and at which place we Shall delay to make Some Selestial observations &c.    passed Eleven Island and Seven rapids to day. Several of the rapids verry bad and dificuelt to pass. The Islands of different Sizes and all of round Stone and Sand, no timber of any kind in Sight of the river, a fiew Small willows excepted; in the evening the countrey becomes lower not exceding 90 or 100 feet above the water and back is a wavering Plain on each Side, passed thro: narrows for 3 miles where the Clifts of rocks juted to the river on each Side compressing the water of the river through a narrow chanel; below which it widens into a kind of bason nearly round without any proceptiable current, at the lower part of this bason is a bad dificuelt and dangerous rapid to pass, at the upper part of this rapid we over took the three Indians [3] who had Polited us thro the rapids from the forks. those people with our 2 Chiefs had proceeded on to this place where they thought proper to delay for us to warn us of the difficulties of this rapid. [4] we landed at a parcel of Split timber, the timber of a house of Indians out hunting the Antilope in the plains; and raised on Scaffolds to Save them from the Spring floods.    here we were obliged for the first time to take the property of the Indians without the consent or approbation of the owner.    the night was cold & we made use of a part of those boards and Split logs for fire wood. Killed two teel this evening. Examined the rapids which we found more dificuelt to pass than we expected from the Indians information.    a Suckcession of Sholes, appears to reach from bank to bank for 3 miles which was also intersepted with large rocks Sticking up in every direction, and the chanel through which we must pass crooked and narrow.    we only made 20 miles today, owing to he detention in passing rapids &c.

Tuesday 15th Oct. 1805.    a clear cool morning.    we delayed to dry the baggage which was wet. Some of the men went out and killed three geese and Several ducks.    about 3 oClock P. M. we loaded the canoes and Set out again and proceeded on    the current very rapid.    the country continues barron as usal. Came 27 miles this day and Camped little above a bad rapid—

Tuesday 15th.    This day was fine, clear and pleasant; and we continued here until the afternoon to dry our baggage that had been wet yesterday. The natives have great quantities of fish deposited on this island. [5] At 3 o'clock P. M. we got all our effects on board and proceeded on. Passed down a beautiful part of the river; and killed some geese and ducks. This river in general is very handsome, except at the rapids, where it is risking both life and property to pass; and even these rapids, when the bare view or prospect is considered distinct from the advantages of navigation, may add to its beauty, by interposing variety and scenes of romantick grandeur where there is so much uniformity in the appearance of the country. We went 18 miles this evening and halted at an old Indian camp on the north side, where we had great difficulty in procuring wood to cook with, as none at all grows in this part of the country.

〈Sunday〉 Tuesday 15th Oct. 1805.    a clear cool morning.    we delayed here to dry the baggage.    Some of the men went out and killed three geese & Several ducks.    about 3 oClock P. m. we loaded up the canoes and Set out and proceeded on over Several rapids and Swift water.    passed Several Scaffels of wood where it was put up to be Saved for the use of their fishing in the Spring.    the country continues as yesterday.    we came 17 miles and Camped above a bad rapid on a Sand bar    no wood except an Indians Scaffel    we had to take Some of the wood for our use this evening.

Tuesday October 15th    This morning we had clear & cool weather; We delayed here in order to dry the wet baggage.    Some of our Men went out & killed 3 Geese and Several ducks.—    About 3 o'Clock P. M. we loaded the Canoes & set out, and proceeded on; & passed several rapids & places where the water run very swift, We also passed Scaffolds of wood, which the Natives had built for the use of this fishery in the Spring season.    The Country continued the same as Yesterday.    We encamped on a Sand barr above a bad Rapid, we found no Wood, excepting an Indian Scaffold & we took some of it for our use.    We came about 17 Miles this day, our Course the same as Yesterday.    (West)

1. Opposite this entry in the Elkskin-bound Journal is a sketch map (fig. 13) of Indian groups of the Columbia River basin. Neither the tribal names nor geographic locations can be determined with any confidence. (back)
2. Probably part of the Blue Mountains of southeast Washington and northeast Oregon. (back)
3. These three were probably Palouse Indians. Trafzer & Scheuerman, 3. (back)
4. Fishhook Rapids. They camped just above the rapids ("bason Rapids" on Atlas map 75), in Franklin County, Washington. At least two archaeological sites are known for the north shore of the Fishhook Rapids area. The downstream site appears to be the one illustrated in Atlas map 75; this site as a late prehistoric pit-house village that was archaeologically tested in 1959 by Daugherty. (back)
5. McKeehan's note: "Immense numbers of salmon must ascend the western rivers every summer from the Pacific, and constitute a chief article in the food of the natives. Mr. McKenzie informs us that in the river, by which he arrived at the ocean, where it empties itself four or five hundred miles northwest of the mouth of the Columbia, the salmon are so abundant, that the natives have a constant and plentiful supply of that excellent fish. He also on his return states, under the date of the 6th and 7th of August, that the salmon in the waters of the Columbia were driving up the current in such large shoals, that the water seemed to be covered with the fins of them." (back)
Previous
Next