rained Some last night and this morning, all hands at work about the huts Chinking them, The 7 men left to bring in the Elk left in the woods Come with 2    the 3rd they Could not find, as it was that left by the party that got lost night before last

The after part of the Day fair & Cool, fore part of the Day rain hailed & blew hard, The mountain [2] which lies S. E of this is covered with Snow to day    we fleece [3] all the meat and hang it up over a Small Smoke    The trees are hard to Split for Punchens to Cover our houses &c. [4] 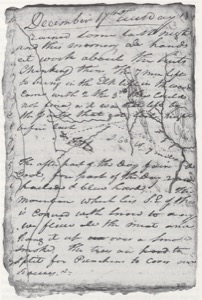 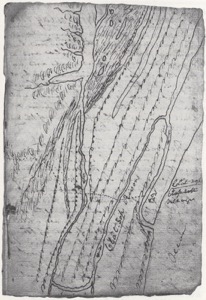 Some rain last night and a continuation of it this morning.    all the men at work about the houses, Some Chiking, Dobbing Cutting out dores &c. &c. The 7 men left to bring in the Elk arrived and informed that they Could not find the meat that the party who Stayed out all night had left—    the forepart of this day rained hailed and blew hard, the after part is fair and Cool—    a Mountain which is S. [blank]° E. about 10 mile distant has got Snow on its top which is ruged and uneavin

Cause a Small fire & Smoke to be made under the meat which is hung up in Small peaces:    The trees which our men have fallen latterly Split verry badly into boards.    The most of our Stores are wet.    our Leather Lodge has become So rotten that the Smallest thing tares it into holes and it is now Scrcely Sufficent to keep off the rain off a Spot Sufficiently large for our bead.

Tuesday 17th Decr. 1805.    a little Snow and hail fell last night and continues this morning.    we went at chinking up our huts and Splitting plank &C.    cut our meat & hung it in the meat house &C

Tuesday 17th.    This was another cloudy day, with some light showers of rain and hail. About 11 o'clock the 7 men came with the canoe and the remainder of the meat. We still continued working at our huts.

Tuesday Decemr. 17th    We had during last night some Snow & hail, & it continued the same this morning.    We were all employed in building Chimneys in our huts, & splitting out planks to cover our huts with.    We cut up the Meat, & hung it up in the Meat house, in Order to save it.    A little snow remained on the pine trees the whole of this day.    The Man that was sick (George Gibson) got much better.—

1. Under this entry in the Elkskin-bound Journal is a sketch map which appears to show the area between Fort Clatsop and the Pacific Coast, in Clatsop County, Oregon. Opposite this entry is a sketch map of the area about the site of the expedition's salt works. See December 28, 1805, and Atlas map 84. (back)
2. Perhaps Saddle Mountain, Clatsop County. Coues (HLC), 2:735. (back)
3. Criswell, 39, derives this verb from the definition of "fleece" as the meat taken from the sides of the hump of the bison. As the entry in Codex I indicates below, Clark is clearly referring to cutting the meat into small pieces for smoking. (back)
4. Perhaps in disagreement with his own comment of December 13, and that of Gass on December 14, who said that the timber "splits freely and makes the finest puncheons I have ever seen." (back)
Previous
Next