Nothing transpired today worthy of notice.    we are agreeable disappointed in our fuel which is altogether green pine.    we had supposed that it burn but illy, but we have found that by spliting it that it burns very well. The dress of the Clatsops and others in this neighbourhood differs but little from the discribed of the skillutes; they never wear leggins or mockersons which the mildness of this climate I presume has rendered in a great measure unnecessary; and their being obliged to be frequently in the water also renders those articles of dress inconvenient.    they wear a hat of a conic figure without a brim confined on the head by means of a stri[n]g which passes under the chin and is attatched to the two opsite sides of a secondary rim within the hat.    the hat at top terminates in a pointed knob of a connic form also, or in this shape. [1]    these hats are made of the bark of cedar and beargrass wrought with the fingers so closely that it casts the rain most effectually in the shape which they give them for their own uce or that just discribed.    on these hats they work various figures of different colours, but most commonly only black and white are employed.    these figures are faint representations of whales the canoes and the harpoonneers striking them.    sometimes squares dimonds triangles &c. The form of knife which seems to be prefered by these people is a double edged and double pointed daggar; the handle being in the middle, and the blades of unequal lengths, the longest usually from 9 to ten inches 〈long〉 and the shorter one from four to five. these knives they carry with them habitually and most usually in the hand, somtimes exposed but most usually particularly when in company with strangers, under their robes    with this knife they cut and lense their fish make their arrows &c.    this is somewhat the form of the knife— [2]    A is a small loop of a strong twine through which they sometimes insert the thumb in order to prevent it's being wrested from their hand.

Nothing transpired to day worthey of notice.    we are agreeably disapointed in our fuel which is altogether green pine.    we had Supposed that it burned badly, but we have found by Spliting it burns very well.

The Sac-a commis is the groth of high dry Situations, and invariably in a piney Country, or on its border; it is Generally found in the open piney woodlands as on the Western Side of the Rocky mountains but in this neighbourhood we find it in the praries or on the borders in the more open woodland's; a very rich Soil is not absolutely necessary, as a meager one frequently produces it abundantly.    the nativs on the West side of the Rocky mountains who can precure this berry invariably use it; to me it is a very tasteless and insipid frute. This Shrub is an evergreen, the leaves retain their virdue most perfectly throughout the winter even in the most rigid climate as on Lake Winnipic.    the root of this shrub puts foth a great number of Stems, which seperate near the surface of the ground; each Stem from the size of a Small quill, to that of a mans finger. These are much branched forming an accute angle with the Stem, and all more properly procumbent than crossing, for altho' it sometimes puts foth radicles from the Stems and branches which Strike obliquely into the ground, those radicles are by no means general, equable in their distances from each other nor do they appear to be calculated to furnish nutriment to the plant but rather to hold the Stem or branch in its place.    the bark is formed of several thin layers of a Smothe thin brittle substance of a redish brown colour easily seperated from the woody Stem in flakes.    the leaves with respect to their possition are scatter'd yet closely arranged near the extremities of the twigs particularly.    the leaves are about ¾ of an inch in length and about half that in width, is oval but obtusely pointed, absolutely entire, thick, Smoth, firm, a deep green and slightly grooved. the leaf is Supported by a Small footstalk of preportionable length.    the berry is attached in an irregular and Scattered manner to the Small boughs among the leaves, tho' frequently Closely arranged, but always Supported by a Seperate Short and Small peduncles, the incersion of which produces a Small concavity in the berry while its opposit side is Slightly convex; the form of the berry is a Spheroid, the Shorter diameter being in a line with the peduncle or Stem—.    this berry is a pericarp the outer Coat of which is a thin firm tough pellicle, the inner part consists of dry mealy powder of a yellowish white colour invelloping from four to six propotionably large hard light brown seeds each in the form of section of a spheroid which figure they form when united, and are distitute of any membranous covering.—    the colour of this fruit is a fine scarlet.    the nativs usually eat them without any preparation.    the fruit ripens in September and remains on the bushes all winter.    the frost appears to take no effects on it.    these berries are Sometimes gathered and hung in their houses in bags where they dry without further trouble, for in their succulent State they appear to be almost as dry as flour. 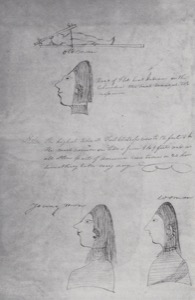 Thursday Janry 30th    This day Cold & Cloudy, & some Snow fell, in the fore part of this day.    In the Evening we had clear cold weather,