Nothing worthy of notice occurred today.    our fare is the flesh of lean elk boiled with pure water, and a little salt.    the whale blubber which we have used very sparingly is now exhausted.    on this food I do not feel strong, but enjoy the most perfect health;—    a keen appetite supplys in a great degree the want of more luxurious sauses or dishes, and still render my ordinary meals not uninteresting to me, for I find myself sometimes enquiring of the cook whether dinner or breakfast is ready.— [1]

The Sac a commis is the growth of high dry situations, and invariably in a piney country or on it's borders.    it is generally found in the open piney woodland as on the Western side of the Rocky mountain but in this neighbourhood we find it only in the praries or on their borders in the more open wood lands; a very rich soil is not absolutely necessary, as a meager one frequently produces it abundantly.    the natives on this side of the Rockey mountains who can procure this berry invariably use it; to me it is a very tasteless and insippid fruit.    this shrub is an evergreen, the leaves retain their virdure most perfectly through the winter even in the most rigid climate as on lake Winnipic. [2]    the root of this shrub puts forth a great number of stems which seperate near the surface of the ground; each stem from the size of a small quill to that of a man's finger; these are much branched the branches forming an accute angle with the stem, and all more poperly pocumbent than creeping, for altho' it sometimes puts forth radicles from the stem and branches which strike obliquely into the ground, these radicles are by no means general, equable in their distances from each other nor do they appear to be calculated to furnish nutriment to the plant but reather to hold he stem or branch in it's place.    the bark is formed of several thin layers of a smoth thin brittle substance of a dark or redish brown colour easily seperated from the woody stem in flakes. the leaves with rispect to their position are scatered yet closely arranged near the extremities of the twigs particularly.    the leaf is about ¾ of an inch in length and about half that in width, is oval but obtusely pointed, absolutely entire, thick, smoth, firm, a deep green and slightly grooved, the leaf is supported by a small footstalk of proportionable length.    the berry is attatched in an irregular and scattered manner to the small boughs among the leaves, tho' frequently closely arranged, but always supported by seperate short and small peduncles, the insertion of which poduces a slight concavity in the bury while it's opposite side is slightly convex; the form of the berry is a spheroid; the shorter diameter being in a line with the peduncle.—    this berry is a pericarp the outer coat of which is a thin firm tough pellicle, the inner part consists of a dry mealy powder of a yellowish white colour invelloping from four to six proportionably large hard light brown seeds each in the form of a section of a spheroid which figure they form when united, and are destitute of any membranous covering.—    the colour of this fruit is a fine scarlet.    the natives usually eat them without any preperation.    the fruit ripens in september and remains on the bushes all winter. the frost appears to take no effect on it. these berries are sometimes geathered and hung in their lodges in bags where they dry without further trouble, for in their most succulent state they appear to be almost as dry as flour.—

Nothing worthey of notice occured to day.    our fare is the flesh of lean Elk boiled with pure water and a little Salt.    the whale blubber which we have used very Spearingly is now exhosted.    on this food I do not feel Strong, but enjoy tolerable health—.    a keen appetite Supplies in a great degree the want of more luxurious Sauses or dishes, and Still renders my ordanary meals not uninteresting to me, for I find myself Sometimes enquireing of the Cook whether dinner Supper or Brackfast is ready.—. indeed my appetite is bt Seldom gratified, not even after I have eaten what I conceve a Sufficency.— [4]

Maney of the nativs of the Columbia were hats & most commonly of a conic figure without a brim confined on the head by means of a String which passes under the chin and is attached to the two opposit Sides of a Secondary rim within the hat—    the hat at top termonates in a pointed knob of a conic form, or in this Shape. [5]    these hats are made of the bark of Cedar and beargrass wrought with the fingers So closely that it Casts the rain most effectually in the Shape which they give them for their own use or that just discribed, on these hats they work various figures of different colours, but most commonly only black and white are employed. these figures are faint representations of the whale, the Canoes and the harpooners Strikeing them.    Sometimes Square dimonds triangle &c. The form of a knife which Seems to be prefured by those people is a double Edged and double pointed dagger the handle being near the middle, the blades of uneaquel length, the longest from 9 to 10 incs. and the Shorter one from 3 to 5 inches.    those knies they Carry with them habitually and most usially in the hand, Sometimes exposed, when in Company with Strangers under their Robes    with this knife they Cut & Clense their fish make their arrows &c.    this is the form of the Knife [6] A is a Small loop of a Strong twine throng through which they Sometimes they incert the thumb in order to prevent it being wrested from their hand.—. 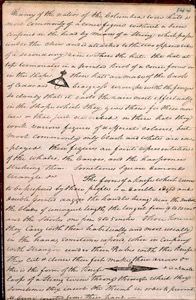 Wednesday 29th.    We had a cold clear morning; and the day continued clear throughout. On the 30th the weather was cloudy; and not so cold as the day before; and some snow fell.

Wednesday Janry 29th    It froze very hard during last night, & this morning was clear cold weather, Some of the Men in the fort were employed cutting wood for our fires, and others in making Cloathes for our party.    The two Men who came from the Salt Camp last evening killed a large handsome Otter, & brought in the Skin with them