Our sick are still on the recovery. Shannon & Labuishe returned in the forenoon; they had killed no Elk and reported that they beleived the Elk have retired from their former haunts and gone further back in the country to a considerable distance from this place.    this is very unwelcome information for poor and inferior as the flesh of this animal is it is our principal dependance for subsistence.

This evening we were visited by Comowooll the Clatsop Chief and 12 men women & children of his nation. Drewyer came a passenger in their canoe, and brought with him two dogs. The chief and his party had brought for sail a Sea Otter skin some hats, stergeon [1] and a [s]pecies of small fish [2] which now begin to run, and are taken in great quantities in the Columbia R. about 40 miles above us by means of skiming or scooping nets.    on this page I have drawn the likeness of them as large as life; [3] it as perfect as I can make it with my pen and will serve to give a general idea of the fish.    the rays of the fins are boney but not sharp tho' somewhat pointed. the small fin on the back next to the tail has no rays of bone being a thin membranous pellicle.    the fins next to the gills have eleven rays each.    those of the abdomen have eight each, those of the pinna-ani [4] are 20 and 2 half formed in front.    that of the back has eleven rays.    all the fins are of a white colour.    the back is of a bluish duskey colour and that of the lower part of the sides and belley is of a silvery white.    no spots on any part.    the first bone of the gills next behid the eye is of a bluis cast, and the second of a light goald colour nearly white.    the puple of the eye is blak and the iris of a silver white.    the underjaw exceeds the uper; and the mouth opens to great extent, folding like that of the herring.    it has no teeth.    the abdomen is obtuse and smooth; in this differing from the herring, shad anchovey &c of the Malacopterygious Order & Class Clupea, [5] to which however I think it more nearly allyed than to any other altho' it has not their accute and serrate abdomen and the under jaw exceeding the upper.    the scales of this little fish are so small and thin that without minute inspection you would suppose they had none.    they are filled with roes of a pure white colour and have scarcely any perceptable alimentary duct. I find them best when cooked in Indian stile, which is by roasting a number of them together on a wooden spit without any previous preperation whatever.    they are so fat they require no additional sauce, and I think them superior to any fish I ever tasted, even more delicate and lussious than the white fish of the lakes [6] which have heretofore formed my standart of excellence among the fishes. I have heard the fresh anchovey [7] much extolled but I hope I shall be pardoned for beleiving this quite as good.    the bones are so soft and fine that they form no obstruction in eating this fish.    we purchased all the articles which these people brought us; we suffered these people to remain all night as it rained, the wind blew most violently and they had their women and children with them; the latter being a sure pledge of their pacific dispositions.    the Sturgeon which they brough us was also good of it's kind.    we determine to send a party up the river to procure some of those fish, and another in some direction to hunt Elk as soon as the weather will permit. 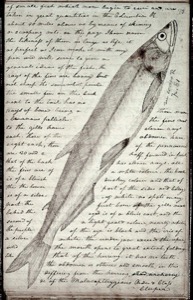 Our Sick are Still on the recovery. Shannon and Labiche returned in the forenoon, they had killed no Elk, and reported that they believe the Elk have returned from their former haunts and gorn further back in the mountains to a considerable distance from this place.    this is very unwelcom information, for poore and inferior as the flesh of this animale is, it is our principal dependance for Subsistance.

The Rackoon is found in the woody Country on the Coast in considerable quantities.    the nativs take a fiew of them in Snars, and deadfalls; tho' appear not to value their Skins much, and but Seldom prepare them for robes.    The large Grey Squirel [8] appear to be a native of a narrow tract of Country on the upper Side of the mountains below the Great falls of Columbia which is pritty well covered in maney parts with a Species of white oak.    this animal is much larger than the Gray Squirel of our Country, it resembles it much in form and colour.    it is as large as the Fox Squirel [9] of the South Atlantic States.    the tail is reather larger than the whole of the body and head, the hair of which is long and tho' inserted on all Sides reispect the horozontal one.    the eyes are black, whiskers black and long.    the back, Sides, head, tale and outer parts of the legs are of a blue lead colour grey.    the breast, belly, and inner parts of the legs are of a pure white.    the hair is Short as that of the Fox Squirel but is much finer and intermixed with a propotion of fur.    the nativs make great use of those Skins in forming their robes.    this Squirel Subsists principally on the acorn and filburts, [10] which last also grow abundantly in the Oak Country—. The Small brown Squirel [11] is a butifull little animal about the size of the red Squirel of the E. States or Something larger than the ground Squirel of the U States.    the tail is as long as the body and neck formed Somewhat flat.    the eyes black, whiskers long and black but not abundant.    the back, Sides, head, neck and outer parts of the legs are of a redish dark brown.    the throat, breast, belly and inner parts of the legs are of a pale brick red.    the tail is a mixture of black and fox coloured red in which the black prodomonates in the middle, and the other on the edges and extremity.    the hair of the body is about ½ inch long and So fine and soft that it has the appearance of fur.    the hair of the tail is coarses and double as long.    this animal Subsists principally on the Seeds of various Species of pine and are always found in the piney Country.    they are common to the tract of woody country on this coast. they lodge in Clefts of rocks, holes in the Ground, old Stumps of trees and the hollow trunks of falling timber; in this respect resemble the rat always haveing their habitation in or near the earth. The Smal Grey Squirel [12] Common to every part of the Rocky Mountains which is timbered, differ from the dark brown squirel just discribed only in its colour. it's back, neck, Sides, head, tail and outer Sides of the legs are of brown lead coloured Grey; the tail has a Slight touch of the fox colour near the extremity of some of the hairs.    the throat, belly, breast, and inner part of the legs are of the Colour of tanners ooze and have a narrow Stripe of black commencing behing each Sholder and extending longitudinally for about 3 inches between the Colours of the Side & belly.    their habits are also the Same with the dark brown Squirel of this neighbourhood, and like them are extreamly nimble and active. The Ground Squirel [13] is found in various parts of the Countrey as well as the Praries as wood lands, and is one of the fiew animals which we have Seen in every part of our voyage.    it differs not at all from those of the U, States.

The Barking Squirel [14] and handsom Ground Squirel [15] of the Plains on the East Side of the Rocky Mountains are not found in the plains of the Columbia.

This evening we were visited by Comowooll the Clatsop Chief and 14 men women and Children of his nation. Drewyer came a pasinger in their Canoe, and brought with him two dogs.    the Chief and his party had brought for Sale a Sea otter Skin, Some hats, Sturgeon and a Species of fish which now begins to run and are taken in Great quantities in the Columbia River about 40 miles above us by means of Skiming or scooping nets. See likeness on the other Side of this leaf or page. [16] Capt Lewis gave an old Coat and vest for a Sea otter Skin, we purchased Several hads of the Indian manufactry and distributed them among the party.    we also purchased a fiew of the Small fish which we found deliciously fine.

Monday 24th Feby. 1806. Cloudy.    in the afternoon George Drewyer retorned and a number of Indians [17] with him    they brought some hats and fresh fish.    our officers bought a Sea otter Skin and Several hats for the party.    the two hunters [18] came to the Fort    had killed only one Elk.—

Monday Febry. 24th    This morning we had Cloudy weather.    in the afternoon George Drewyer who went with the Clatsop Indians two days past returned to the fort; he was accompanied by a number of the Natives.    They all came in Canoes & brought some Straw & Split hatts, fresh fish &ca for sale.    These Indians catch Sturgeon & other fish in great abundance    Our officers purchased of these Indians a Sea Otter skin & several of their hatts.    These Indians staid at the fort during this night.    they were a part of the Clatsop Nation & behaved themselves very well.—    Our 2 hunters returned to the fort & had killed One Elk.—

1. Presumably the white sturgeon, Acipenser transmontanus. Lee et al., 42. (back)
2. The first description of the eulachon, or candle fish, Thaleichthys pacificus. Burroughs, 266–67; Cutright (LCPN), 251–52, 274, 427; Lee et al., 126. Lewis's statement about the run of the eulachon refers to their presence in the Cowlitz River, where they can be easily scooped up, and not to the Columbia. A vertical line runs through several lines of this passage, perhaps done by Biddle. (back)
3. A sketch of the eulachon (fig. 41), in Lewis's Codex J, p. 93. Beside it someone, probably Coues, has written in pencil; "see Codex R p. 81" at right angles to the main text. That notation refers to a copy of this entry about the eulachon, but done by an unknown person and presumably at a much later date. See Appendix B; Moulton (SJ), 196–98. (back)
4. The Latin pinna ani (or analis) refers to the fish's anal fin. (back)
5. Another instance of Lewis's use of the Linnaean system. Today the eulachon is not grouped with the herring and other species, though in the past it was considered a related species. (back)
6. Presumably a fish of the Great Lakes, perhaps Coregonus sp., whitefish or cisco. (back)
7. From the family Engraulidae. (back)
8. The first description of the western gray squirrel. Burroughs, 97. (back)
9. For squirrel, Sciurus niger. (back)
10. Hazelnut, filbert, Corylus cornuta Marsh. var. californica (DC.) Sharp, like the acorns, harvested by birds and squirrels. Hitchcock et al., 2:83. (back)
11. Another new species, Douglas's squirrel or chickaree. The red squirrel and ground squirrel, mentioned for comparison, are probably the red squirrel, Tamiasciurus hudsonicus, and perhaps the eastern chipmunk, Tamias striatus, a mostly terrestrial squirrel. Cutright (LCPN), 274, 446; Burroughs, 97–98; Hall, 1:337–40. (back)
12. Richardson's red squirel. (back)
13. Townsend's chipmunk, actually a new species although they did not recognize it as such. Cutright (LCPN), 273, 442; Burroughs, 96; Coues (HLC), 3:859, 859 n. 58. (back)
14. Lewis and Clark's familiar name for the prairie dog, Cynomys ludovicianus. (back)
15. Probably the thirteen-lined ground squirrel, Spermophilus tridecemlineatus. (back)
16. See Clark's entry for February 25, 1806, below. (back)
17. Coboway with a retinue of either twelve or fourteen as noted by Lewis and Clark. (back)
18. Shannon and Labiche had been unsuccessful in the hunt, according to the captains. (back)
Previous
Next