It continued to rain and blow so violently that there was no movement of the party today.    the Indians left us in the morning on their return to their village. Willard somewhat worse the other Invalledes on the ricovery. I am mortifyed at not having it in my power to make more celestial observations since we have been at Fort Clatsop, but such has been the state of the weather that I have found it utterly impracticable.— [1]

The Rackoon is found in the woody country on this coast in considerable quantities.    the natives take a few of them in snars and deadfalls; tho' appear not to vallue their skins much, and but seldom prepare them for robes. The large grey squirrel appears to be a native of a narrow tract of country on the upper side of the mountains just below the grand falls of Columbia which is pretty well covered in many parts with a species of white oak.    in short I beleive this squirrel to be coextensive with timber only, as we have not seen them in any part of the country where pine forms the majority of the timber, or in which the oak dose not appear. this animal is much larger than the grey squirrel of our country it resembles it much in form and colours.    it is as large as the fox squirrel of the Southern Atlantic states.    the tail is reather longer than the whole length of the body and head.    the hair of which is long and tho' inserted on all sides reispect the horizontal ones only.    the eyes are black.    whiskers black and long.    the back, sides, head, tail and outer part of the legs are of a blue lead coloured grey.    the breast belley and inner part of the legs are of a pure white.    the hair is short as that of the fox-squirrel but is much finer and intermixed with a proportion of fur.    the natives make great use of these skins in forming their robes.    this squirrel subsists principally on the acorn and filbird which last also grows abundantly in the oak countrey.— The small brown squirrel is a beautifull little animal about the size and form of the red squirrel of the Eastern Atlantic states and western lakes.    the tail is as long as the body and neck, formed like that of the red squirrel or somewhat flat.    the eyes black.    whiskers long and black but not abundant.    the back, sides, head, neck and outer part of the legs are of a redish dark brown.    the throat, breast, belley and inner part of the legs are of a pale brick red.    the tail is a mixture of black and fox coloured red in which the black    〈reather〉 predominates in the midle and the other on the edges and extremity.    the hair of the body is about ½ an inch long and so fine and soft that it has the appearance of fur.    the hair of the tail is coarser and doubly as long.    this animal subsists principally on the seeds of various species of pine, and are always found in the piny country they are common to the tract of wooddy country on this coast.    they lodge in clifts of rocks, holes in the ground old stumps of trees and the hollow trunks of fallen timber; in this rispect resembling the rat, always having their habitatin in or near the earth. the small grey squirrel common to every part of the rocky mountain which is timbered, difirs from the dark brown squirrel just discribed only in it's colour.    it's back, sides, neck, head tail and outer side of the legs are of a brown lead coloured grey; the tail has a slight touch of the fox colour near the extremity of some of the hairs.    the throat, breast, belley, and inner parts of the legs are of the colour of tanner's ooze and have a narrow stripe of black, commencing just behide each sholder and exten[d]ing longitudinaly for about 3 inches betwen the colours of the sides and belley.    their habids are also the same of the dark brown squirrel of this neighbourhood and like them are extreemly nimble and active.    the ground squirrel is found in every part of the country, as well the praries as woodlands, and is one of the few animals which we have seen in every part of our voyage.    it differs not at all from those of the U' States.    the barking squirrel and handsome ground squirrel of the plains on the East side of the rocky mountains are not found in the plains of Columbia.

It continued to rain and blow So violently that there was no movement of the party to day.    the Indians left us in the morning on their return to their village. Willard Somewhat worse the others are on the recovery.    we are mortified at not haveing it in our power to make more Celestial observations since we have been at Fort Clatsop, but Such as been the State of the weather that we have found it utterly impractiable—. I purchased of the Clatsops this morning about half a bushel of Small fish which they had cought about 40 miles up the Columbia in their scooping nets.    as this is an uncommon fish to me and one which no one of the party has ever Seen.    on the next page I have drawn the likeness of them as large as life; it's as perfect as I can make it with my pen and will serve to give a general idea of the fish.    the rays of the fins are boney but not Sharp tho' Somewhat pointed.    the Small fin on the back next to the tail has no rays of bone being a thin membranous pellicle.    the fins next to the gills have eleven rays each.    those of the abdomen have Eight each, those of the pinna ani are 20 and 2 half formed in front.    that of the back has eleven rays.    all the fins are of a white colour.    the back is of a blueish duskey colour and that of the lower part of the Sides and belly is of a Silvery white.    no Spots on any part.    the first of the gills next behind the eye is of a blueish cast, and the second of a light gold colour nearly white.    the puple of the eye is black and the iris of a silver white. the under jaw exceeds the upper; and the mouth opens [2] to great extent, folding like that of the Herring.    it has no teeth.    the abdomen is obtuse and Smooth; in this differing from the herring, Shad, anchovey &c. of the Malacapterygious Order and Class Clupea, to which however I think it more nearly allyed than to any other altho' it has not their accute and Serrate abdomen and the under jaw exceeding the upper.    the scales of this little fish are So small and thin that without manute inspection you would Suppose they had none.    they are filled with roes of a pure white Colour and have Scercely any perceptable alimentary duct. I found them best when cooked in Indian Stile, which is by rosting a number of them together on a wooden spit without any previous preparation whatever.    they are so fat that they require no aditional sauce, and I think them Superior to any fish I ever tasted, even more dilicate and lussious than the white fish of the Lakes which have heretofore formed my Standard of excellence among the fishes. I have herd the fresh anchovey much extoll'd but I hope I shall be pardened for believing this quit as good.    the bones are So Soft and fine that they form no obstruction in eating this fish. 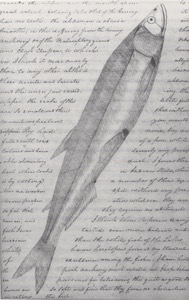 Tuesday 25th.    The rain continued and the weather was stormy. About 10 o'clock the natives went away, though it continued to rain very fast. They brought us yesterday a number of small fish, [3] of a very excellent kind, resembling a herring, and about half the size.

Tuesday Febry 25th    This morning a hard Storm of wind arose accompanied with Rain.    The Indians all left the fort, in order to return to their Village.    The Storm continued during the whole of this day.—    The Men that is sick in the fort are still on the recovery.—

1. Two light red vertical lines run through the first several lines of the next paragraph and later in the paragraph, perhaps done by Biddle. (back)
2. At this point in Clark's Voorhis No. 2 appears a sketch of the eulachon (fig. 42). (back)
3. The eulachon, or candle fish, Thaleichthys pacificus; the captains called it an anchovy. (back)
Previous
Next