This morning the fishing and hunting parties [1] set out agreeably to their instructions given them last evening.    at 11 A. M. we were visited by Comowoll and two of his children.    he presented us with some Anchovies which had been well cured in their manner.    we foud them excellent.    they were very acceptable particularly at this moment.    we gave the old man some small articles in return.    this we have found much the most friendly and decent savage that we have met with in this neighbourhood. Hall had his foot and ankle much injured yesterday by the fall of a large stick of timber; the bones were fortunately not broken and I expect he will be able to walk again shortly. Bratton is now weaker than any of the convalessants, all of whom recover slowly in consequence of the want of proper diet, which we have it not in our power to procure.— [2]

The Aquatic birds of this country, or such as obtain their subsistence from the water, are the large blue and brown heron, fishing hawk, blue crested fisher, gulls of several species of the Coast, the large grey gull of the Columbia, Cormorant, loons of two species, white, and the brown brant, small and large geese, small and large Swan, the Duckinmallard, canvis back duck, red headed fishing duck, black and white duck, little brown duck, black duck, two species of divers, blue winged teal, and some other speceis of ducks.

This morning, the fishing and hunting party's Set out agreeably to their instructions given them last evening. At 11 a. m. we were visited by Commowoll and two boys Sons of his.    he presented us with Some Anchovies which had been well Cured in their manner, we found them excellent.    they were very acceptable perticularly at this moment.    we gave the old mans Sones a twisted wire to ware about his neck, and I gave him a par of old glovs which he was much pleased with.    this we have found much the most friendly and decent Indian that we have met with in this neighbourhood.

Hall had his foot and ankle much injured yesterday by the fall of a log which he had on his Sholder; the bones are fortunately not broken, I expect he will be able to walk again Shortly. Bratten is now weaker than any of the convalessants, and complains verry much of his back, all of them recovering Slowly in consequence of the want of proper diet, which we have it not in our power to precure.—

The large Blue and brown Herons or crains as they are usially called in the U States are found below tide water.    they are the Same of those of the U, States. The Fishing Hawk with the Crown of the head white, and back of a milkey white, and the blue crested or king fisher are found on every part of the Columbia and its water Along which we passed and are the Same with those of the U, States.    the fishing hawk is not abundant, particularly in the mountains. There are 4 Species of the larus or gull on this coast and river.    1st a Small Species the Size of a Pegion; [3] white except some black spots about the head and the little bone on the but of the wing.    2d a Species Somewhat larger of a light brown colour, with a mealy coloured back. [4]    3rd the large Grey Gull, [5] or white larus with a greyish brown back, and light grey belly and breast, about the Size of a well grown pullet, the wings are remarkably long in perpotion to the Size of the body and it's under chap towards the extremity is gibbous and protuberant than in either of the other Species.    a White Gull [6] about the Size of the Second with a remarkable beak; adjoining the head and on the base of the upper Chap there is an elivated orning of the Same Substance with the beak which forms the nostriels at A; it is Somewhat in this form. [7]    the feet are webed and the legs and feet of a yellow colour.    the form of the wings body &c are much that of the 2d Species this bird was Seen on Haleys bay. 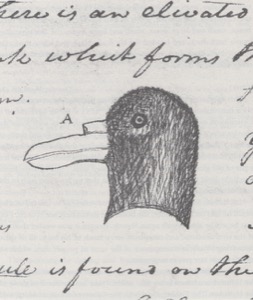 The large Grey Gull [8] is found on the Columbian waters as high as the enterance of the Koos koos ke and in common with the other Species on the coast; the others appear confined to the tidwater, and the 4th Species not So common as either of the others. The Comorant is a large black duck which feeds on fish; I proceive no difference between it & these found in the rivers of the Atlantic Coasts.    we met with as high up the river as the enterance of the Chopunnish into the Kooskooske river.    they increased in numbers as we decended, and formed much the Greatest portion of waterfowls which we saw on the Columbia untill we reached tidewater, where they also abound but do not bear a Similar proportion to the fowls found in this quarter.    we found this bird fat and tolerably flavoured as we decended the Columbia.

Thursday 6th March 1806.    a fair morning    Six men [9] Set out a hunting in different directions. Sergt. Pryor and 2 more men Set out with the Small canoe to go up the Columbia River to the Cath le mahs village after fish and wa-pa-toes, our old Clotsop Chief [10] visited us.    we halled out our canoes to repair them &C.—

Thursday 6th—    Our stock of provisions being nearly exhuasted, six men were sent out in different directions to hunt, and three more were sent to endeavour to procure some fish, as the natives take a great number of the small fish about 20 miles distant from the fort by water. Some men were also employed in repairing the canoes, that we may be able to set out on our return immediately, should our hunters be unsuccessful. The elk, almost the only game in this part of the country, are chiefly gone to the mountains. This day continued fair throughout.

Thursday March 6th    We had a pleasant morning.    Our hunters returned last night, but had not killed any Game.—    Six Men were sent out a hunting from the fort this morning.    they were in different directions.    Serjeant Pryor & 2 Men set out with a small Canoe, in order to go up the Columbia River to the Cath-le-mah Village & fishery;—    in Order to purchase some fresh fish, Wapatoe Roots &ca.    Our old friend the Clatsop chief visited us this day.    We hawled up our Canoes in order to repair them &ca