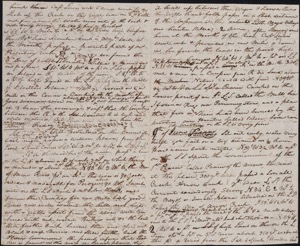 Set out early passed the head of the Island opposit which we Camped last night, and brackfast at the Mouth of a large Creek on the S. S. of 30 yds wide Called big Monetou, from the pt. of the Isd. or Course of last night to the mouth of this Creek is N 61° W 4½ ms. a Short distance above the mouth of this Creek, is Several Courious Paintings and Carveing in the projecting rock of Limestone inlade with white red & blue flint, of a verry good quallity, [7] the Indians have taken of this flint great quantities. We landed at this Inscription and found it a Den of rattle Snakes, we had not landed 3 minutes before three verry large Snakes wer observed on the Crevises of the rocks & Killed—    at 〈whilst from〉 the mouth of the last mentioned Creek Capt. Lewis took four or five men & went to Some 〈Creeks〉 Licks or Springs of Salt water from two to four miles up the Creek on Rt. Side    the water of those Springs are not Strong, Say from 4 to 600 Gs. of water for a Bushel of Salt    passed Some Small willow Islands and Camped at the Mouth of a Small river called Good Womans River    this river is about 35 yards wide and Said to be navagable for Perogues Several Leagues    Capt. Lewis with 2 men went up the Creek a Short distance.    our Hunters brought in three Bear this evening, and informs that the Countrey thro: which they passed from the last Creek is fine rich land, & well watered.

Thursday June 7th 1804.    we Set out at 5 OClock    fair day & f. wind    passed high Clifts & a fine large Spring which Run from under the clifts of Rocks, about 2 miles further we Come to a Creek Called the Big Devil. [8]    we Stayed to Breakfast.    Capt. Lewis & Several men went with him out to a lick, up the Creek.    high Bluffs on N. Side.    this Maneteau Creek is 30 yds. wide at the mouth.    we passed a pointed part of a projecting Rock    we found this to be a den of rattle Snakes, we killed three.    high Land on South Side of the River.    we Encamped at the mouth of good womans River [9] on Right    the hunters came in with 3 Bears [10] this evening & informed us that the Country between these Rivers is Rich

thursday 7th June 1804    Set out 5 oclock    Came 2 miles    past Som [s]prings Comes out of Clifte    2 miles past a Creerk on the N Side Called the River of the Big Devil    one mile past a rock on the N. Side whare the pictures of the Devil and other things    We Kild 3 Rattel Snakes at that Rock    5 miles to Creek on the N Side Called 〈pon〉 Good woman Creek    Strong watter    past severall Isd. George Druer [X: George Drewyer or Druillard .] [11] Kild one Bar〈e〉    encampet at the mouth    the Land is Good well timberd, &c.

Thursday 7th June 1804.    the hunters and Capt. Lewis went out to a buffaloe lick two miles.    Saw this Salt Spring, but no buffaloe.    on N. E. Side of the Missourie up the Monetuie river [12] in a timbred country.    fine bottons along each Side of the River, under brush thick. [13]    Killd 3 Rattel Snakes of Different Sorts at a large rock Close by the latter river    after roed. 10 miles    Campd. at the Mouth of Creek namd the 〈Old〉 Good woman N. E. Side of the Missurie    Our daily hunters [14] met us there with three Bears, One Old famel & her two Cubbs brought By G. Drewyer—

Thursday June 7th    This morning Captain Lewis & the hunters went to a Buffalo lick, two Miles from the River, and had a view of a Salt spring, but found no Buffalo,

Captain Lewis & the hunters proceeded to the Moniture River, (which lays on the North East side of the Mesouri River,) were they found a well timber'd country, having fine bottoms with rich soil, and along the River on each side of it, found thick brush; On their route they kill'd 3 Rattle snakes near a large Rock, close to the said River, we proceeded with the boat 10 Miles, and encamped at the Mouth of a Creek, call the good Woman Creek lying on the North east side of the Mesouri, where we were met by the party that went hunting; One of which, (G Drewer,) kill'd a She Bear, and her two Cubbs & brought them to the opposite side of the River where we were encamped at.—

1. Moniteau Creek meets the Missouri at Rocheport, on the Howard-Boone county line, Missouri. MRC map 8. (back)
2. See fig. 13. (back)
3. Probably the timber rattler, Crotalus horridus. Burroughs, 273. (back)
4. Perhaps the later Diana Island. MRC map 8. (back)
5. At the mouth of Bonne Femme Creek, in Howard County, some three to four miles below present Booneville, on the opposite shore. Ibid. (back)
6. According to Whitehouse, they were a female and two cubs, killed by Drouillard. (back)
7. The lower Mississippian rocks (Pierson, Fern Glen, Reeds Spring, Grand Falls, Burlington, and Keokuk formations) of central Missouri are noted for their chert (flint) content. Some are mottled and colorful. Pierson cherts are red to brown; those of Fern Glen are grayish green and Reeds Springs are black; most of the remainder are cream to light gray. Howe & Koenig, 59–66. (back)
8. Moniteau Creek, at Rocheport on the Howard-Boone county line, Missouri. (back)
9. Bonne Femme Creek, Howard County. (back)
10. Black bear, Ursus americanus. (back)
11. The interlined spellings of Drouillard's name and the underlining (not shown) of Floyd's "George Druer" were added in red ink by unknown hand. (back)
12. Moniteau Creek, which meets the Missouri at Rocheport, on the Howard–Boone county line, Missouri. (back)
13. Beginning with the next sentence a new, unknown writer takes over. In his edition, Reuben Gold Thwaites designated the writer as No. 2 to distinguish him from Whitehouse, whom he labeled No. 1, and from a final unknown hand which he called No. 3. We continue this convenient terminology. (back)
14. Drouillard and John Newman. (back)
Previous
Next