Pleasent morning wind from N. W. fair; visited by many of the natives who brought a considerable quanty of corn in payment for the work which the blacksmith had done for them—    they are pecuarly attatched to a battle ax formed in a very inconvenient manner in my opinion. [1]    it is fabricated of iron only, the blade is extreemly thin, from 7 to nine inches in length and from 4¾, to 6 Inches on it's edge, from whence the sides proceed nearly in a straight line to the eye where it's width is generally not more than an inch. The eye is round & about one inch in diameter.    the handle seldom more than fourteen inches in length, the whole weighing about one pound—    the great length of the blade of this ax, added to the small size of the handle renders a stroke uncertain and easily avoided, while the shortness of the handel must render a blow much less forceable if even well directed, and still more inconvenient as they uniformly use this instrument in action on horseback. The oalder fassion is still more inconvenient, it is somewhat in the form of the blade of an Espantoon but is attatchd to a helve of the dementions before discribed    the blade is sometimes by way of ornament purforated with two three or more small circular holes—    the following is the general figure    it is from 12 to 15 inces in length    [drawing] [2] 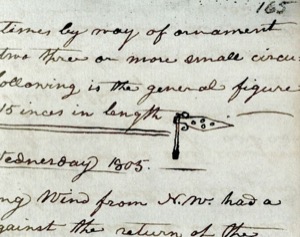 Tuesday 5th Feby. 1805.    the morning clear.    the River Riseing So that the water Spreads over the Ice in Sundry places near this.    the Coal being ready for the blacksmith to work    the Savages bring corn to have their war axes made & to get Scrapers to dress their buffaloe Robes with &.C.—

Tuesday February 5th    We had fair Weather, nothing material happend in the Fort, Captain Clark and his party still proceeded on down the River, and met with some Indian camps on their way, [3] That party killed 3 deer this day

1. Clark sketched this form of tomahawk in his entry of January 28, 1805. See figure. The type, later known as the "Missouri war hatchet," was favored by various tribes on the Great Plains, the Missouri River, and the eastern verge of the plains. Lewis's entry is a major source of information on this tomahawk. Russell (FTT), 284–86. (back)
2. See figure. The blade was shaped like the head of a spontoon, or espontoon, for which, see below, May 3, 1805. The style, in spite of Lewis's disapproval, was popular among many tribes across North America. Ibid., 275–78; Woodward, 54. (back)
3. Probably some of the abandoned earthlodge villages below Mandan Island, McLean County, North Dakota. (back)
Previous
Next