rained a little before day, and all the morning, a hard wind from the S West untill 9 oClock, the rained Seased & wind luled, and Capt Lewis with two Canoes Set out & 〈Crossed〉 passed down the rapid    The others Soon followed and we passed over this bad rapid Safe. We Should make more portages if the Season was not So far advanced and time precious with us 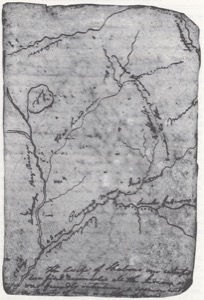 The wife of Shabono our interpetr we find reconsiles all the Indians, as to our friendly intentions    a woman with a party of men is a token of peace

a windey dark raney morning    The rain commenced before day and Continued moderately untill near 12 oClock—    we took all our Canoes 〈over〉 through This rapid without any injurey.    a little below passed through another bad rapid at [blank] miles    passed the Mo: of a large Creek [ML?: at 5 m in the Lard. bend we call Ki-moo-e-nimm Creek ] [2]    [ML?: 10 Ms.] little river in a Stard. bend, imediately below a long bad rapid [ML?: drewyers River ] [3]; in which the water is Confined in a Chanel of about 20 yards between rugid rocks for the distance of a mile and a half and a rapid rockey Chanel for 2 miles above. This must be a verry bad place in high water, here is great fishing place, the timbers of Several houses piled up, and a number of wholes of fish, and the bottom appears to have been made use of as a place of deposit for their fish for ages past, here two Indians from the upper foks over took us and continued on down on horse back, two others were at this mouth of the Creek—    we passed a rapid about 9 mile lower.    at dusk came to on the Std. Side & Encamped. [4] The two Inds. on horse back Stayed with us. The Countery Thro' which we passed to day is Simlar to that of yesterday open plain no timber    passed Several houses evacuated at established fishing places, [5] wind hard from The S. W. in the evening and not very cold

Sunday 13th Oct. 1805.    a rainy morning.    wind high.    delayed untill about 10 oClock then took down one canoe at a time below the rapids.    all the men who could not Swim Carried each a load of baggage by land.    about 12 we got Safe below the rapids at 2 oClock cleared off. Saw a great number of fishing camps where the natives fish everry Spring.    they raft all their wood down the River a long distance and they put it up on Scaffels and take great care of it.    towards evening we passed through a place in the River where it was all confined in a narrow channel of about 15 yards wide for about 2 miles and ran like a mill race    large fisherys below in the Spring. Saw 2 Indians Swim their horses across the river to the N. Side and went on down the River.    passed a creek [6] which came in on the Lard. Side this afternoon    the current Swift.    the barrons and plains continue as usal.

Sunday 13th.    This was a cloudy wet morning, and we did not set out till 11 o'clock: we then proceeded with two canoes at a time over the rapids, which are about 2 miles in length; and in about two hours got all over safe. We then went on again and passed more bad rapids, but got through safe. In the afternoon the weather cleared and we had a fine evening. Having gone 23 miles we encamped on the north side. The country continues much the same, all high dry prairie. One handsome creek [7] comes in on the south side.

〈Friday〉 Sunday 13th Oct. 1805.    a rainy wet morning.    we delayed untill about 10 oClock A. m. then took 2 of the canoes at a time down the rapids.    all the men which could not Swim went by land and carried Some rifles & Instruments &c.    we got Safe below the rapids by 12 oClock.    dined on Sammon and proceeded over Several more rapids    the wind hard a head.    cleard off about 2 oC. P. m.    we Saw Several Old camps where the natives fish in the Spring, but no timber except what they raft down a long distance, and they Scaffel it up verry carefully.    towards evening we came to a verry rockey place in the River & rapid    the River all confined in a narrow channel only about 15 [8] yds. wide for about 2 mile and ran as [s]wift as a mill tale    the canoes ran down this channel Swifter than any horse could run.    a great fishery below these rapids.    Saw 2 Indians Swim their horses across the River to the N. S. and follow down the River    they have to ride fast to keep up with us for the current mostly rapid.    the clifts & hills high plains & barrons continues on each Side of the River as usal.    we Came [blank] miles this day and Camped on the Stard Side.    passed a Creek on the Lard. Side this aftr. noon.

Sunday October 13th    This morning we had Rain & delayed setting out till about 10 o'Clock A. M.    We took 2 of our Canoes at a time down the Rapids.    The Men that were among us, that could not swim, went by land, to go below these Rapids.    They carried with them some Rifle Guns & Mathematical Instruments &ca.    We were fortunate in getting all our Canoes safe over these Rapids, by 12 o'Clock A. M. when we halted to dine on Salmon.    We proceeded on our Voyage about 2 o'Clock P. M. & passed several old fishing Camps, where the Natives come to catch Salmon in the spring of the Year.    We crossed several more Rapids which were not difficult to pass.    About 3 o'Clock P. M. the wind rose from the West & the Weather became clear & pleasant.    We saw no Timber this day, excepting what the Natives had rafted down the River a great distance, which they Scaffold up very carefully.    Towards evening we came to a very rockey place lying in the River, which run very rapid.    The River at this place was confined in a narrow channell, & was only about 150 Yards wide for about 2 Miles & ran as swift as Water from a Mill tail.—    Our Canoes descended the River at this place with much more swiftness than a common horse could run the same distance.    We found below these falls a great Indian fishery & saw 2 Indians swim their horses across the Columbia River, to the North side of it.    They followed us down the River & had to ride fast, to come up with us.    The current of the River run mostly very rapid, the Hills & plains high, & some Clifts of rocks.    The land is very Barren on both sides of the River as usual.    We came 35 Miles from the best computation we can make this day & encamped on the North side of the River.    Our Course for these several days past has been West.    We passed by a Creek this afternoon lying on the South side of the River which was small.

1. At this point in the Elkskin-bound Journal appears a somewhat confused sketch map (fig. 11) showing the drainage of the Columbia River. (back)
2. Now Tucannon River, Columbia County, Washington. Atlas map 73. "Ki-Moo-e-nimm" (and similar spellings) may come from the Nez Perce term qemúynem. The etymology of the word is not clear but may have to do with the Wallowa valley region of the Nez Perce homeland in northeastern Oregon and apparently is unrelated to the Tucannon River, or at least only in a very distance geographical sense. Haruo Aoki, personal communication. (back)
3. Present Palouse River, the boundary between Franklin and Whitman counties, Washington. This was the site of the largest Palouse village, Palus (in Nez Perce, "Palutpe"). Trafzer & Scheuerman, 2; Atlas map 74. (back)
4. In Franklin County, Washington, opposite or a little below Ayer, Walla Walla County, on the opposite side of the Snake. Atlas map 74. (back)
5. The burial vaults noted on Atlas map 74 on the east side of the Palouse (Drewyer's) River may represent an archaeological site where one burial was found, or it may represent the nearby talus burials. Nance; Sprague & Birkby, 4–6. The site mentioned on the west side of the Palouse River consisted of a large burial site involving more than two hundred individuals. The village associated with this burial ground is located nearby and to the east. Another village area, perhaps the one referred to by Clark because large circular housepit depressions are apparent on the surface, is located to the northwest of the burial ground. Sprague (PBS); Sprague (ABP), 86–101; Fryxell & Daughterty; Schalk, 141–77. A Jefferson peace medal was recovered during archaeological excavations of the area in 1964. The medal was at Washington State University, Pullman, but it is now on loan for display to the Nez Perce National Historical Park, Spalding, Idaho. Chatters (LCEM); Cutright (LCIPM), 164–65. Late nineteenth-century photographs of the appearance of the piled-up house timbers may be seen in Rice (NAD), 57, 63. (back)
6. Tucannon River, Columbia County, Washington. (back)
7. Tucannon River, Ki-moo-e-nimm Creek to the party, Columbia County, Washington. (back)
8. The number "15" is written over another number ending with a zero. The copyist misread this as "150," hardly a "narrow channell." (back)
Previous
Next