a fine morning    the Indians approached us with caution.    our 2 old Chiefs deturmin to return home, Saying they were at war with Indians below and they would kill them    we pursuaded them to Stay 2 nights longer with us, with a view to make a peace with those Indians below as well as to have them with us dureing our Delay with this tribe. Capt Lewis went to view the falls    I Set out with the party at 9 oClock a m    at 2½ miles passed a rock which makes from the Stard Side 4 Lodges above 1 below and Confined the river in a narrow channel of about 45 yards [1] this continued for about ¼ of a mile & widened to about 200 yards, in those narrows the water was agitated in a most Shocking manner boils Swell & whorl pools, we passed with great risque It being impossible to make a portage of the Canoes, about 2 miles lower passed a verry Bad place between 2 rocks one large & in the middle of the river    here our Canoes took in Some water, I put all the men who Could not Swim on Shore; & Sent a fiew articles Such as guns & papers, and landed at a village of 20 houses on the Stard Side in a Deep bason where the river apprd. to be blocked up with emence rocks [2]    I walked down and examined the pass found it narrow, and one verry bad place a little 〈below〉 in the narrows    I pursued this Chanel which is from 50 to 100 yards wide and Swels and boils with a most Tremendeous manner; prosued this channel [3] 5 ms & returned    found Capt Lewis & a Chief from below with maney of his men on a visit to us, one of our Party Pete Crusat played on the violin which pleased the Savage, the men danced, Great numbers of Sea Orter Pole Cats about those fishories.    the houses of those Indians are 20 feet Square and Sunk 8 feet under ground & Covered with bark with a Small door round at top rose about 18 Inches above ground, to keep out the Snow    I saw 107 parcels of fish Stacked, and great quantites in the houses

The morning fare after a beautifull night, the nativs approached us this morning with great caution.    our two old chiefs expressed a desire to return to their band from this place, Saying "that they Could be of no further Service to us, as their nation extended no further down the river than those falls, [NB: they could no longer understand the language of those below the falls, till then not much difference in the vocaby.] [4] and as the nation below had expressed hostile intentions against us, would Certainly kill them; perticularly as They had been at war with each other;" we requested them to Stay with us two nights longer, and we would See the nation below and make a peace between them, they replied they "were anxious to return and See our horses" we insisted on their Staying with us two nights longer to which they agreed; our views were to detain those Chiefs with us untill we Should pass the next falls, which we were told was verry bad, and at no great distance below, that they might inform us of any designs of the nativs, and if possible to bring about a peace between them and the tribes below. 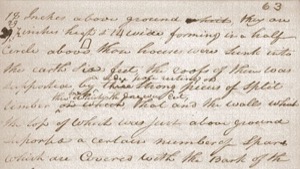 Thursday 24th Oct. 1805.    the natives did not attempt to trouble us last night.    a clear pleasant morning.    we loaded the canoes and Set out about 9 oClock and proceeded on    the current rapid    we went through a narrows [8] where the river is all confined in a narrow channel of about 20 yds and verry rapid and bad whorl pools, and went on verry well    towards evening we came to another narrows [9]    we camped [10] little above at an Indian village which was made half under the surface of the ground and the upper part well formed and covred with white ceeder bark.    they are verry comfortable houses.    we bought a number of fat dogs, crambries and white cakes of root bread.    high prarie and barron hills near the River but appears to be Some timber back from the River.

Thursday 24th.    We had a fine morning and proceeded on early; found the water very rapid below the falls; and having gone 4 miles below the narrows, came to other narrows still more confined and the rocks higher. At the head of these narrows we halted about 2 o'clock at a great Indian village, and remained there all night. [11] We got fish and dogs from the natives, and some berries, different from any we got before, some call them cranberries; [12] whether of the real kind or not I am not certain. In our way down to day we saw a great many sea otters [13] swimming in the river, and killed some, but could not get them as they sunk to the bottom. This village has better lodges than any on the river above; one story of which is sunk under ground and lined with flags mats: The upper part about 4 feet above ground is covered over with cedar bark, and they are tolerably comfortable houses.

Thursday 24th Oct. 1805.    a clear cool morning    we loaded up and Set out about 9 oClock and proceeded on down.    the current verry rapid.    we went through a place wher the river was all confined in a narrow channel of about 20 yds. wide high rocks on each Side    the current verry rapid and full of whorl pools    we ran down verry fast, passed Several fishing Camps.    high barron land on each Side of the River.    about 4 oClo P. m. we went down a bad rapid where the River was cut in rockey Isld. &.c.    a Short distance below we came to another narro where the River is filled with high rocks.    we halted and Camped for the night at a village of Savages or red people, which have their houses in our form only they have them in the ground except the roof which is covred with white ceeder bark    Some hewn plank which are verry nice comfortable houses    their flag mats &c.    we bought from them Some cakes of white root bread and other kinds cramberies &c.    we bought a nomber of fat dogs and Some wood for us to cook with.    their appears to be Some timber back from the River.    their has been white people tradeing among these Savages    Saw one half white child among them.    Saw also a new copper tea kittle beeds copper and a nomber of other articles which must have come from Some white trader.    we had went only 7 miles this day.    〈this may〉

Thursday October 24th    We had a cool pleasant morning.    We loaded our Canoes & set out about 9 o'Clock A. M. on our Voyage; we found the current of the river running very rapid.    We proceeded on, and passed through a part of the River, which was confined in a narrow channel of about 20 Yards wide; having high rocks on each side of it, the Current very rapid, and a great many whirl pools.    Our Canoes went with very great rapidity through this place.    We got through this dangerous place, without any accident happening to us, & passed by several Indian fishing Camps, & high barren land which lay on both sides of the River.—    About 4 o'Clock P. M. we went down a bad rapid, where the River had made channels, in rockey Islands, & dangerous places; and a short distance below that place, we came to a Narrow place in the River, where across the River, was many high Rocks, & several rapid Channels running between them.—    We halted above this Narrow, & encamped for the night at a Village Inhabited by Indians.    These Indians had their houses built, in the same form that we build our houses in the United States with these exceptions, that they were built in the ground, & the Roofs were made, of white Cedar bark, & neatly put on.    They had also some of them covered with hewn plank.    They appeared to live comfortable, they had matts to lay on, made out of flaggs & several other household utensials.—    We purchased from them some Cakes of white Root bread; Cranberries, a number of fat dogs, Wood to cook with, &ca.    We saw some timber here, which grew a distance back from the River.—    We conclude that their must have been some white people among these Indians, as they had among them, a new Copper Tea kettle, beads, small pieces of Copper & a number of other articles    We saw also a Child among them, which was a mix'd breed, between a White Man & Indian Women.    The fairness of its Skin, & rosey colour, convinced us that it must have been the case, and we have no doubt, but that white Men trade among them—    We came but 7 Miles this day & our Course was as usual West,—

1. The Short, or Little, Narrows, with the Long Narrows, constitute The Dalles of the Columbia, located above the present town of The Dalles, Wasco County, Oregon. Once major obstacles to navigation, they are now inundated by The Dalles Dam. Clark drew a detailed skech map of the area in Codex H, pp. 2–3, and another version in Voorhis No. 4. Allen (PG), 313; Atlas map 78. The four lodges have been reported as occurring in the vicinity of Browns Island, but the precise location has not been ascertained. This seems too far downstream, as Browns Island occurs downstream of the Lewis and Clark's Short Narrows and the lodges are shown at the upstream end on Atlas map 78. Wilke et al., 27–28. (back)
2. They camped here, in Klickitat County, Washington, in the vicinity of Horsethief Lake State Park. The reason for the asterisk at the beginning of the next sentence is unknown. The Indians were Wishram-Wasco Chinookans whom Lewis and Clark called Echelutes, from the term i-č-xlúit, "I am a Wishram[-Wasco] Indian." Ronda (LCAI), 170; Atlas map 78; Sapir, 533; Curtis, 180 n. 1. The wealth of archaeological materials recorded in this general area at the head of the Long Narrows certainly could contain the village near which Lewis and Clark camped. These lodges may be near what was recorded as the Wishram village of wa'q!Emap. Spier & Sapir, 164. Extensive archaeological research between Horsethief Lake and The Dalles Dam has taken place since the 1920s. Duncan; Wilke et al.; Spier & Sapir; Butler (WM); Caldwell; Butler (ALCV); Cressman et al.; Strong, Schenck, & Steward. (back)
3. The Long Narrows. Atlas map 78. (back)
4. The Dalles area was a dividing point between Chinookan-language speakers downstream and Shahaptian-language speakers upstream. The two Nez Perce chiefs could no longer serve as interpreteres. Ronda (LCAI), 173. (back)
5. A references a figure from Codex H. (back)
6. The rocks here are composed of basalt of the middle Miocene Frenchman Springs Member of the Wanapum Basalt. A fault cuts across the eastern end of the basin raising a block of these rocks across the river. (back)
7. Here in Codex H, p. 63, Clark inserts his drawing of the door shape. (back)
8. The Short, or Little, Narrows, and the Long Narrows, which the party would pass the next day, together constitute The Dalles of the Columbia River above the town of The Dalles, Wasco County, Oregon. The narrows have disappeared under the waters of The Dalles Dam. (back)
9. Long Narrows. (back)
10. In the vicinity of Horsethief Lake State Park, Klickitat County, Washington, among Wishram-Wasco Indians. (back)
11. In Klickitat County, Washington, in the vicinity of Horsethief Lake State Park. The Indians were Wishram-Wasco Chinookans. (back)
12. Probably American cranberrybush, Viburnum trilobum Marsh., restricted to the Columbia gorge in this region. (back)
13. Not the sea otter, Enhydra lutris, which never leaves salt water, but the harbor seal, Phoca vitulina richardii. The captains later became aware of their error in this matter. (back)
Previous
Next