Some rain from 10 to 12 last night this morning fair, we Set out at 8 oClock down to the place Capt Lewis pitched on for winter quarters, when he was down    proceeded on against the tide    at the point No. 2 we met our men Sent down after meet

To point Adams is West

They informed me that they found the Elk after being lost in the woods for one Day and part of another, the most of the meat was Spoiled, they distance was So great and uncertain and the way bad, they brought only the Skins, york was left behind by Some accident which detained us Some time eer he Came up    after passing round the pt. No. 2 in verry high swells, we Stopd & Dined in the commencement of a bay, [2] after which proceeded on around the bay to S E. & assended a Creek [3] 8 miles to a high pt. & Camped [4] haveing passed arm [5] makeing up to our left into the countrey

Mt. St. Helens is the mountain we mistook for Mt. Reeaneer [6] 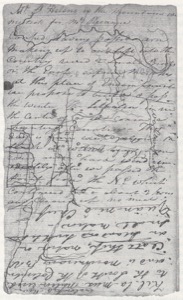 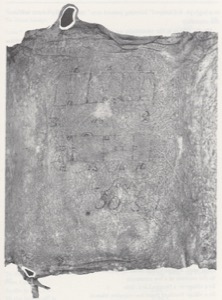 receved 2 Small Brooks on the East, extencive marshes    at this place of Encampment [7] We propose to build & pass the winter, The situation is in the Center of as we conceve a hunting Countrey—    This day is fair except about 12 oClock at which time Some rain and a hard wind imedeately after we passed the point from the N. E which Continued for a about 2 hours and Cleared up.    no meat

Kil-la-mux nation [9] reside to the South of the Columbia and in noumerous 3 V.

Clatt Shop nation on an Island and South Side    Small nation.—

made a Chief by name Tow-wâll

Some rain from 10 to 12 last night, this morning fair, have every thing put on board the Canoes and Set out to the place Capt Lewis had viewed and thought well Situated for winter quarters—    we proceeded on against the tide to a point about [blank] miles    here we met Sergt Pryor and his party returning to the Camp we had left without any meat, the waves verry verry high, as much as our Canoes Could bear rendered it impossible to land for the party, we proceeded on around the point into the bay and landed to take brackfast on 2 Deer which had been killed & hung up, one of which we found    the other had been taken off by [s]ome wild animal probably Panthors or the Wild [cat?] of this Countrey    here all the party of Serjt Pryors joined us except my man york, who had Stoped to rite his load and missed his way, Sergt Pryor informed us that he had found the Elk, which was much further from the bay than he expected, that they missed the way for one day and a half, & when he found the Elk they were mostly Spoiled, and they only brought the Skins of 4 of the Elk    after brakfast I delayed about half an hour before York Came up, and then proceeded around this Bay which I have taken the liberty of calling Meriwethers Bay the Cristian name of Capt. Lewis who no doubt was the 1st white man who ever Surveyed this Bay, [14] we assended a river which falls in on the South Side of this Bay 3 miles to the first point of high land on the West Side, the place Capt. Lewis had viewed and formed in a thick groth of pine about 200 yards from the river, this situation is on a rise about 30 feet higher than the high tides leavel and thickly Covered with lofty pine.    this is certainly the most eligable Situation for our purposes of any in its neighbourhood.

Meriwethers Bay is about 4 miles across deep & receves 2 rivers the Kil how-â-nah-kle and the Ne tul and Several Small Creeks—    we had a hard wind from the N. E. and Some rain about 12 oClock to day which lasted 2 hours and Cleared away. From the Point above Meriwethers Bay to Point Adams is West

Saturday 7th Decr. 1805.    the morning clear    we put our canoes in the water loaded up and set out and proceeded on down the River.    the Shore is covred thick with pine and under brush.    passd. Several Spring runs.    the waves ran verry high.    we could not land untill we turned a point in a bay [15] where we halted and cooked a young Deer which the hunters had killed the other day.    the men who had been out to take care of the meat joined us with 4 Elk hides but no meat    the distance so great and the weather so bad that they brought no meat. Capt. Clarks servant did not come up with the rest. Capt. Clark Stayed with one canoe and waited for him a Short time    we proceeded on    the waves roled verry high.    the canoe I was in ran on a Sand barr and was near filling.    but the waves took hir off without injury.    we proceed. on round a bay then went up a River abt. 3 miles and landed at the place appointed for winters quarters. [16]    this River is about 100 yds wide at this place but the tide water extends further up.    we unloaded the canoes and carried all our baggage about 2 hundred yards on a rise of ground and thicket of handsom tall Strait pine and balsom fir [17] timber and Camped    here we intend to build a fort and Stay if game is to be found thro. this winter Season.—

Saturday 7th.    About 12 last night the rain ceased and we had a fine clear morning. We put our canoes into the water, loaded them, and started for our intended wintering place. We coasted down the south side about a mile, and then met with the six men, who had gone for meat. [18] They had brought four of the skins but no meat, the distance being great and the weather very bad. The swells being too high here to land we went two miles further and took the men in. We then proceeded round the bay [19] until we came to the mouth of a river [20] about 100 yards broad, which we went up about 2 miles to the place fixed upon for winter quarters, [21] unloaded our canoes, and carried our baggage about 200 yards to a spring, where we encamped.

Saturday Decemr 7th    This morning clear & cold, We put our Canoes into the River & loaded them.    We set off to go to the place appointed for our Winter Quarters & proceeded down along the Coast.    We passed a number of fine Springs or Spring runs, which came in along the Shore.    The Country was covered with pine Trees & under brush.—

The wind rose, & the wind caused the Waves to rise also.    We saw our 6 Men, who had been for the Elk meat, on the Shore.    The Waves ran so high, that we could not land where they were, and had to turn a point of land, to make a harbour; the 6 Men joined us at this place.    They had with them 4 Elk hides, but had none of the Meat.    They mentioned to us, that the distance was so great, & the weather so bad, that it was out of their power to bring it.    We cooked the greater part of a Young Deer, which the hunters had killed, & left near this place.—    We set off, the Waves running very high.—    Captain Clarks negroe Man servant, not having come up, with the Men whom he had went out with, he waited with his Canoe for him.    We proceeded on to a deep bay [22] about 8 Miles, & went up 〈the〉 a River, [23] which was about 100 yards wide.    We then unloaded our Canoes & carried all our baggage, about 200 yards to piece a rising ground in a thicket of tall pine Trees; [24] where we intend building Cabbins, & stay if Game is to be had through the Winter season.— [25]