rained last night as usial, this morning 〈fair〉 Cloudy without rain a hard wind from the S. E.    The Inds. left us this morning and returned to their village, after begging for maney things which they did not secure as we Could not Spare them    I gave the Chief Canio [1] a Razor, Sent out 3 men across the river to hunt, all others employd putting up pickets    Pete Crusat Sick with a vilent Cold    My Servent better—    we are told by the Indians that a whale has foundered on the Coast to the N. W [2] and their nations is collecting fat of him, the wind is too high for us to See it, Capt Lewis is been in readiness 2 days to go and Collect Some of the whale oyle    the wind has proved too high as yet for him to Set out in Safty    In the evening a young Chief 4 men and 2 womin of the War-ci-a-cum tribe came in a large canoe with Wapto roots, Dressed Elk Skins &c. to Sell, the Chief made me a present of about a half a bushel of those roots—    we gave him a medal of a Small Size and a piece of red ribin to tie around the top of his Hat which was made with a double Cone, the diameter of the upper about 3 Inches [3] the lower a about 1 foot 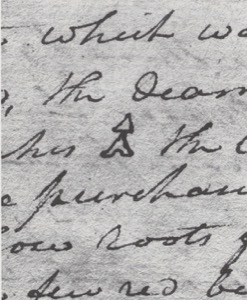 We purchased about 1½ bushels of those roots for which we gave Some few red beeds, Small pices of brass wire and old Check— [4]    those roots proved greatfull to us as we are now liveing on Spoiled Elk which is extreamly disagreeable to the Smel, as well as the taste.

I can plainly discover that a considerable exchange of property is Continually Carried on between the Tribes and villages of those people    they all dress litely    ware nothing 〈on the〉 below the waste, a pice of fur abt. around the body, and a Short robe which Composes the total of their dress, except a few Split hats, and beeds around their necks wrists and anckles, and a few in their ears. They are small and 〈homely〉 not handsom generally Speaking women perticularly.

The Chin nook womin are lude and Carry on Sport publickly    the Clot-sop and others appear deffidend, and reserved

The flees are So noumerous in this Countrey and difficult to get Cleare of that the Indians have difft. houses & villages to which they remove frequently to get rid of them, and not withstanding all their precautions, they never Step into our hut without leaveing Sworms of those troublesom insects.    Indeed I Scercely get to Sleep half the night Clear of the torments of those flees, with the precaution of haveing my blankets Serched and the flees killed every day—    The 1st of those insects we Saw on the Collumbia River was at the 1s Great falls—    I have the Satisfaction to Say that we had but little rain the Course of this day, 〈only〉 not as much as would wet a person.    but hard wind and Cloudy all day.

rained all the last night as usial, this morning Cloudy without rain, a hard wind from the S. E    I gave the Cheif a razor, and himself and party left us after begging us for maney articles none of which they recvied as we Could not Spare the articles they were most in want of. Peter Crusat Sick with a violent Cold, Y. [York] better.    all hands employed about the Pickets & gates of the fort.    we were informed day before yesterday that a whale had foundered on the coast to the S. W. near the Kil a mox N. and that the greater part of the Clat Sops were gorn for the oile & blubber, the wind proves too high for us to proceed by water to See this monster, Capt Lewis has been in readiness Since we first heard of the whale to go and see it and collect Some of its Oil, the wind has proved too high as yet for him to proceed—    this evining a young Chief 4 Men and 2 womin of the War ci a cum Nation arrived, and offered for Sale Dressed Elk Skins and Wap pa to, the Chief made us a preasent of about ½ a bushel of those roots.    and we purchased about 1½ bushels of those roots for which we gave Some fiew red beeds Small peaces of brass wire & old Check    those roots proved a greatfull addition to our Spoiled Elk, which has become verry disagreeable both to the taste & Smell    we gave this Chief a Medal of a Small Size and a piece of red riben to tie around the top of his hat which was of a Singular Construction [5] [NB: in Peales Museum] [6]    Those people will not Sell all their Wap pa to to us they inform us that they are on their way to trade with the Clât Sops.    The nations above Carry on a verry Considerable interchange of property with those in this neighbourhood.    they pass altogether by water, they have no roads or pathes through the Countrey which we have observed, except across portages from one Creek to another, all go litely dressed ware nothing below the waste in the Coaldest of weather, a piece of fur around their bodies and a Short roabe Composes the Sum total of their dress, except a few hats, and beeds about their necks arms and legs    Small badly made and homely generally. The flees are So noumerous and hard to get rid of; that the Indians have different houses which they resort to occasionally, not withstanding all their precautions they never Step into our house without leaveing Sworms of those tormenting insects; and they torment us in Such a manner as to deprive us of half the nights Sleep frequently—    the first of those insects which we saw on the Columbian waters was at the Canoe portage at the great falls. Hard winds & Cloudy all day but verry little rain to day. 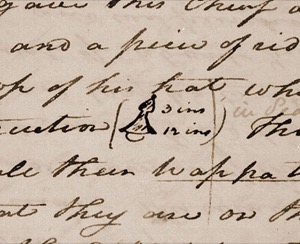 Sunday 29th.    This was a cloudy morning; but a fair day succeeded; and three more hunters went out. In the afternoon several of the Chin-ook nation came to our fort with Wapto roots and dried salmon to trade. We purchased some from them and found the supply seasonable as our meat on land is somewhat spoiled. The men about the fort are engaged in finishing our small fortification.

Sunday Decemr 29th    This day was fine clear pleasant weather, the first fair day we had for a long time past.    Several Indians who belong'd to the Chinook Nation; [8] came to our fort.    These Indians brought with them Roots which they called Wappetoes & dryed Salmon in their Canoes to trade with us.    Our Officers purchased the whole of these articles from them, for which they gave them some articles of Merchandise.    This supply of fish & Roots came in good time as our Meat was nearly spoiled.    The most part of our Men were employed in putting up the Pickets &Sca.—

1. Probably Coboway. See above, December 12, 1805. (back)
2. "S. W." in the Codex I entry, which is correct, since that was the direction of the "Kil a mox" (Tillamook) people, to which Clark journeyed on January 6, 1806, to see the whale. (back)
3. Here appears a sketch of the hat described. Such hats were typical of the Northwest Coast, and were woven of split cedar bark, sedge, and beargrass. See also below, January 29 and 30, 1806. Gunther (ILNC), 29, 48, 49, 68, 253. (back)
4. Perhaps checked cloth. (back)
5. Here appears another sketch of the conical Indian hat, with dimensions. From this point to the words "homely generally," a vertical line runs through the writing. (back)
6. For Peale and his museum, see above, September 10, 1803. Biddle's note must have been added after the expedition's specimens had gone to the museum. (back)
7. Clark says they were Wahkiakum Indians. (back)
8. Clark says they were Wahkiakum Indians. (back)
Previous
Next