By several trials made today in order to adjust my Octant and ascertain her error in the direct observation, I found that it was 2° 1' 45" + or additive beyond the fracture; this error was ascertained by a comparison with my sextant the error of which had been previously ascertained.    the error of Octant in the direct observation on the broken limb next to 0 or below 55° 20' inclusive is 2° additive only.— Sent Shannon Labuish and Frazier this morning on a hunting excurtion up the Kil-haw'-a-nak-kle river [1] which discharges itself into the head of the bay.    no tidings yet of Sergt. Gass and party. Bratton is still very weak and complains of a pain in the lower part of the back when he moves which I suppose procedes from dability. I gave him barks. [2] Gibson's fever still continues obstenate tho' not very high; I gave him a doze of Dr. Rush's [3] which in many instances I have found extreemly efficatious in fevers which are in any measure caused by the presence of boil [bile?].    the nitre has produced a profuse perspiration this evening and the pills operated late at night his fever after which abated almost entirely and he had a good night's rest. [4]

The Indian dog is usually small or much more so than the common cur.    they are party coloured; black white brown and brindle are the most usual colours.    the head is long and nose pointed eyes small, ears erect and pointed like those of the wolf, hair short and smooth except on the tail where it is as long as that of the curdog and streight.    the natives do not eat them nor appear to make any other use of them but in hunting the Elk as has been before observed.— The brown white or grizly bear are found in the rocky mountains in the timbered parts of it or Westerly side but rarely; they are more common below the rocky Mountain on the borders of the plains where there are copses of brush and underwood near the watercouses.    they are by no means as plenty on this side of the rocky mountains as on the other, nor do I beleive that they are found atall in the woody country, which borders this coast as far in the interior as the range of mountains which, pass the Columbia 〈river〉 between the Great Falls and rapids of that river.    the black bear differs not any from those common the United states and are found under the rocky Mountains in the woody country on the borders of the great plains of columbia and also in this tract of woody country which lie between these plains and the Pacific Ocean.    their oconimy and habits are also the same with those of the United States.—

Sent Shannon Labiesh and frazier on a hunting excurtion up the Kil-haw-a-nak-kle river which discharges itself into the head of Meriwethers Bay.    no word yet of Sergt. Gass and party. Bratten is verry weak and complains of a pain in the lower part of the back when he moves which I suppose proceeds from debility. I gave him barks and Salt peter. Gibsons fever Still Continues obstinate tho' not verry high; we gave him a dose of Dr. Rushes pills which in maney instancis I have found extreamly efficacious in fevers which are in any measure Caused by the presence of boil.    the niter has produced a perfuse perspiration this evening and the pils opperated late at night his feaver after which abated almost intirely and he had a good nights rest.

The Indian Dogs are usually small or much more so than the common cur.    they are party coloured; black white brown and brindle are the more usual colours.    the head is long and nose pointed eyes Small, ears erect and pointed like those of the wolf, hair Short and Smooth except on the tail where it is as long as that of the Cur dog and streight.    the nativs do not eate them, or make any further use of them than in hunting the Elk as has been before observed. Shannon an Labiesh brought in to us to day a Buzzard or Vulture of the Columbia which they had wounded and taken alive. I believe this to be the largest Bird of North America.    it was not in good order and yet it wayed 25 lbs    had it have been so it might very well have weighed 10 lbs. more or 35 lbs. between the extremities of the wings it measured 9 feet 2 Inches; from the extremity of the beak to that of the toe 3 feet 9 inches and a half.    from hip to toe 2 feet, girth of the head 9 inches ¾. Girth of the neck 7½ inches; Girth of the body exclusive of the wings 2 feet 3 inches; girth of the leg 3 inches.    the diameter of the eye 4½/10ths of an inch, the iris of a pale scarlet red, the puple of a deep Sea green or black and occupies about one third of the diameter of the eye the head and part of the neck as low as the figures 1 2 is uncovered with feathers except that portion of it represented by dots foward and under the eye. (See likeness on the other Side of this leaf) [5] the tail is Composed of twelve feathers of equal length, each 14 inches. the legs are 4¾ inches in length and of a whiteish colour uncovered with feathers, they are not entirely Smooth but not imbricated; the toes are four in number three of which are foward and that in the center much the longest; the fourth is Short and is inserted near the inner of the three other toes and reather projecting foward.    the thye is covered with feathers as low as the Knee.    the top or upper part of the toes are imbricated with broad scales lying transversly; the nails are black and in proportion to the Size of the bird comparitively with those of the Hawk or Eagle, Short and bluntly pointed—.    the under Side of the wing is Covered with white down and feathers.    a white Stripe of about 2 inches in width, also marks the outer part of the wing, imbraceing the lower points of the feathers, which [c]over the joints of the wing through their whole length or width of that part of the wing.    all the other feathers of whatever part are of a Glossy Shineing black except the down, which is not glossy, but equally black.    the Skin of the beak and head to the joining of the neck is of a pale orrange Yellow, the other part uncovered with feathers is of a light flesh Colour.    the Skin is thin and wrinkled except on the beak where it is Smooth. This bird fly's very clumsily.    nor do I know whether it ever Seizes it's prey alive, but am induced to believe it does not.    we have Seen it feeding on the remains of the whale and other fish which have been thrown up by the waves on the Sea Coast.    these I believe constitute their principal food, but I have no doubt but that they also feed on flesh.    we did not meet with this bird un[t]ille we had decended the Columbia below the great falls; and have found them more abundant below tide water than above.    this is the Same Species of Bird which R. Field killed on the 18th of Novr. last and which is noticed on that day tho' not fully discribed then I thought this of the Buzzard Specis. I now believe that this bird is reather of the Vulture genus than any other, tho' it wants Some of their characteristics particularly the hair on the neck, and the feathers on the legs.    this is a handsom bird at a little distance.    it's neck is proportionably longer than those of the Hawks or Eagle. Shannon also brought a Grey Eagle which appeared to be of the Same kind common to the U, States.    it weighed 15 pds. and measured 7 feet 7 inches between the extremities of the wings—. 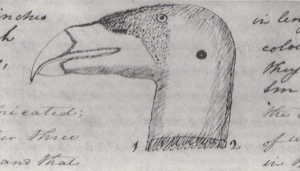 Shannon and Labiesh informed us that when he approached this Vulture after wounding it, that it made a loud noise very much like the barking of a Dog.    the tongue is long firm and broad, filling the under Chap and partakeing of its transvirs curvature, or its Sides forming a longitudinal Groove; obtuse at the point, the margin armed with firm cartelagenous prickkles pointed and bending inwards.

Sunday Febry 16th    We had har[d] rain during last night.    Three Men were sent out hunting in order to try & kill some fowl or Elk for the sick Men.    We are employed at the fort, in making Cloathing &ca.

1. Youngs River, Clatsop County, Oregon. Atlas maps 82, 84. (back)
2. Presumably Peruvian bark (cinchona). (back)
3. Rush's pills, a concoction of Benjamin Rush, Lewis's medical advisor, compounded of approximately ten grains of calomel and ten grains of jalap, a powerful physic. Cutright (LCPN), 175; Chuinard (OOMD), 133, 155–56. There is an "x" across the passage at about this point. (back)
4. A dark vertical line runs through the material in the next paragraph, perhaps drawn by Biddle. (back)
5. After the words, "the legs are 4¾ inches" appears a sketch of the California condor's head (fig. 38) in Clark's Voorhis No. 2. See also the sketch on Atlas map 68, perhaps a preliminary to this. (back)
6. Shannon, Labiche, and Frazer, relate the captains. (back)
Previous
Next