Collins and Windsor were permited to hunt today towards the praries in Point Adams with a view to obtain some fresh meat for the sick.    a little before noon Shannon LaBuishe & Frazier returned with the flesh and hide of an Elk which had been wouded by Sergt. Gass's party and took the water where they pursued it and caught it.    they did not see Sergt. Gass or any of his party nor learn what further succes they had had.    continue the barks with Bratton, and commenced them with Gibson his fever being sufficiently low this morning to permit the uce of them. I think therefore that there is no further danger of his recovery.—    at 2 P. M. Joseph Fields arrived from the Salt works and informed us that they had about 2 Kegs of salt on hand which with what we have at this place we suppose will be sufficient to last us to our deposits of that article on the Missouri.    we there directed a party of six men to go with Fields in the morning in order to bring the salt and kettles to the fort.    Shannon 〈& Labuishe〉 brought me one of the large carrion Crow or Buzzads of the Columbia which they had wounded and taken alive. [1] I bleive this to be the largest bird of North America.    it was not in good order and yet it weighed 25 lbs. had it have been so it might very well have weighed 10 lbs mor or 35 lbs.    between the extremities of the wings it measured 9 feet 2 inches; from the extremity of the beak to that of the toe 3 F. 9½ In. from hip to toe 2 feet, girth of head 9¾ In. girth of the neck 7½ Inches; do. of body exclusive of the wings 2 feet 3 Inches; do of leg 3 inches.    diameter of the eye 4½/10ths of an inch.    the iris of a pale scarlet red, the puple of deep sea green or black and occupyed about one third of the diameter of the eye.    the head and a part of the neck as low as the figures 1 2 is uncovered with feathers except that portion of it represented by dots (see likeness). [2]    the tail is composed of 12 feathers of equal length, each 14 inches.    the legs are 4¾ inches in length and of a white colour un covered with feathers, they are not entirely smooth but not imbricated; the toes are four in number three of which are forward and that in the center much the longes; the fourth is short and is inserted near the inner of the three other toes and reather projecting forward.    the thye is covered with feathers as low as the knee.    the top or upper part of the toes are imbricated with broad scales lying transversly; the nails are blak and in proportion to the size of the bird comparitively with those of the halk or Eagle, short and bluntly pointed.    the under side of the wing is covered with white down and feathers.    a white stripe of about two inches in width, also marks the outer part of the wing, imbracing the lower points of the feathers, which cover the joints of the wing through their whole length or width of that part of the wing.    all the other feathers of whatever part are glossey shining black except the down which is not glossey but equally black.    the skin of the beak and head to the joining of the neck is of a pale orrange yellow the other part uncovered with feathers is of a light flesh colour.    the skin is thin and wrinkled except on the beak where it is smooth.    this bird flys very clumsily nor do I know whether it ever seizes it's prey alive, but am induced to beleive that it dose not.    we have seen it feeding on the remains of the whale & other fish which have been thrown up by the waves on the sea coast.    these I beleive constitute their prinsipal food, but I have no doubt but they also feed on flesh; we did not met with this bird untill we had decended the Columbia below the great falls, and have found them more abundant below tide-water than above. I beleive that this bird is reather of the Vulture genus than any other, tho' it wants some of their characteristics particularly the hair on the neck and feathers on the legs.—    this is a handsome bird at a little distance.    it's neck is proportionably longer than those of the hawks or Eagle. Shannon also brought me a grey Eagle which appeared to be of the same kind common to the U' States; it weighed 15 lb. and measured 7 Feet 7 Inches between the extremities of the wings.— At 4 P. M. Sergt. Gass and party arrived; they had killed eight Elk. Drewyer and Whitehouse also returned late in the evening, had killed one Elk.— Labuishe informed me that when he approached this vulture, after wounding it, that it made a loud noise very much like the barking of a dog & the tongue is large firm and broad, filling the under chap and partaking of it's transverse curvature, or it's sides colapsing upwards forming a longitudinal groove; obtuse at the point, the margin armed with firm cartelaginous prickkles pointed and bending inwards. 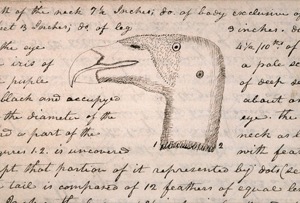 Collins and Windser were permited to hunt to day towards the praries in point Adams with a view to obtain Some fresh meat for the Sick.    a little before noon Shannon and Labiesh & frazier Came with the flesh and hide of an Elk which had been wounded by Serjt. Gasses party and took the water where they pursued it and cought it.    they did not See Sergt. Gass or any of his party or learn what further Sucksess they have had. Continu the barks with Bratten, and Commenced them with gibson his feaver being Sufficiently low this morning to permit the use of them. I think therefore that there is no further danger of his recovery.—.    at 2 P. M. Joseph Field arrived from the Salt works and informd us that they had about 2 Kegs of Salt on hand (say 3 bushels) which with what we have at this place we suppose will be Sufficient to last us to our deposit of that article on the Missouri.    we directed a party of Six men to go in the morning in order to bring the salt and Kittles to the Fort.    at 4 P. M. Serjt. Gass and party arrive; they had killed 8 Elk. Drewyer and Whitehouse also return late in the evening, they had killed one Elk, part of the meat of which they brought in with them.

The Brown, White, or Grizly Bear are found in the rocky mountains in the timbered part of it or Westerly Side but rarely; they are more Common below or on the East Side of the Rocky Mountains on the borders of the plains where there are Copses of bushes and underwood near the water cources.    they are by no means as plenty on this Side of the Rocky Mountains as on the other, nor do I believe they are found at all in the woody country which borders this coast as far in the interior as the range of mountains which pass the Columbia between the enterance of Clarks and the Quick sand Rivers [3] or below the Great falls of Columbia.

The Black Bear differs not any from those Common to the U. States, and are found under the Rocky Mountains in the woody country on the borders of the Great Plain's of Columbia and also in this tract of woody country which lie between these plains and the Pacific Ocian.    their econimy and habits are also the Same with those of the United States.—.

Monday 17th Feby. 1806.    a little Snow fell this fournoon.    three hunters [4] came in with the meat of an Elk which they took out of a creek where some of the hunters had killed    in the after part of the day Sgt. Gass and 2 men [5] returned to the Fort.    they had killed Eight Elk, and jurked 2 of them. Some of the men killed a gray Eagle and a new kind of a Turkey buzzad. [6]    one man [7] came from the Salt works for help to move in the Salt & kittles. Drewyer & Whitehouse came in    had killed one Elk.—

Monday 17th.    The day was stormy; we set out for the fort, and arrived there in the afternoon. We found the sick men [8] at the fort, and still very bad. One of the men [9] brought word from the salt works, that they had made about four bushels of salt; and the Commanding Officers thought that would be sufficient to serve the party, until we should arrive at the Missouri where there is some deposited.

Monday Febry 17th    during last night some Snow fell.    this Morning the weather Clear.    the three hunters that went out Yesterday returned this forenoon, and brought with them, an Elk which they found dead in the River & which they supposed some of our hunters had killed.    In the afternoon Serjeant Gass & 2 of our hunters returned to the fort; they had killed 8 Elk & had Jerked the meat of 2 of them.    One of our Men came from the Salt works.    He came to get some help from us, to help move in the kettles & Salt from the Salt works.    One of our hunters killed a very large Grey Eagle. [10]    Two of our hunters [11] also came to the fort    they had killed One Elk.—

1. The first several lines of this material about the condor have a vertical line through them, perhaps placed by Biddle. (back)
2. A sketch of the California condor's head in Lewis's Codex J, p. 80 (fig. 39). (back)
3. Respectively the Deschutes River, Sherman County, and the Sandy River, Multnomah County, both in Oregon. The mountains are the Cascade Range. Eventually they named the Deschutes the "Towarnahiooks" (variously spelled), giving Clark's name to the present Bitterroot-Clark Fork-Pend Oreille combination of rivers. See Introduction to the Atlas, and October 22, 1805. (back)
4. The three from yesterday. (back)
5. Reubin Field and Thompson; see the entry of February 11. (back)
6. The California condor noted on October 30 and November 18, 1805. (back)
7. Joseph Field, report the captains. (back)
8. Gibson and Bratton. (back)
9. Joseph Field, relate the captains. (back)
10. Lewis says Shannon brought a golden eagle to him. (back)
11. Drouillard and Whitehouse, report Lewis, Clark, and Ordway. (back)
Previous
Next