a little Cloudy this morning    I set out at day light with 10 men & my Sevent, Shabono, Sergt. Pryer odderway Jos. & R. Fields Shannon Colter, wiser, Lebiech & york    proceeded on Down the Shore from the 1st point [1] 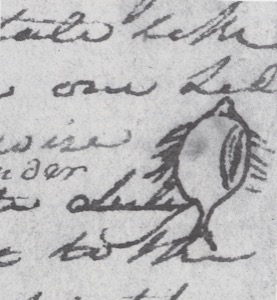 At a run & Island near the Shore here the Traders ancher & trade. [5]    we passed at each point a Soft Clifts of yellow, brown & dark Soft Stones [6] here Capt Lewis myself & Severl. of the man marked our names day of the month & by Land &c. &c.    from this S. W. 3 miles to the Iner pt. of Cape Disapointmt passed a point & 2 Small nitches    (Reuben Fields killed a Vulter) [7]    we found a Curious flat fish Shaped like a turtle, with fins on each side, and a tale notched like a fish, the Internals on one Sid and tale & fins flat wise    This fish Flownder [8] has a white 〈belly〉 on one Side & lies flat to the Ground—    passed from last nitch across to the ocean ½ a mile low land    the Cape is a high Partly bald hill, founded on rock, I assended a high Seperate bald hill [9] Covered with long corse grass & Seperated from the hight of Country by a Slashey bottom 2 miles S. 60 W of the Cape—    thence to a 2d Grassey pt is N. 50° W. 2 miles, Those hills are founded on rocks & the waves brake with great fury against them, the Coast is Sholey for Several miles of this Cape & for Some distance off to the N W a Sand bar in the mouth.    Sholey Some distance out from the mouth    The Coast from the Cape N W is open for a Short distance back then it becomes thick piney Countrey intersperced with ponds 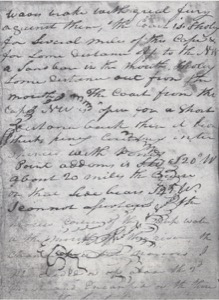 Point addams is 〈S. W〉 S 20° W about 20 miles    the Course on that Side bears S 45 W. I cannot assertain the prosise Course of the Deep water in the mouth of the river, the Channel is but narrow. I proceeded on up above the 2d point and Encamped on the Shore above the high tide, [10] evening Clear, for a Short time. Supd. on Brant and pounded fish    men all Chearfull, express a Desire to winter near the falls this winter.—

from Cape Disapointment to a high point of a Mountn. which we shall call [NB: Clarke's Point of View] [14] beares S. 20° W. about 〈40〉 [WC?: 25] miles, point adams is verry low and is Situated within the direction between those two high points of land, the water appears verry Shole from off the mouth of the river for a great distance, and I cannot assertain the direction of the deepst Chanel, the Indians point nearest the opposit Side. the waves appear to brake with tremendious force in every direction quite across a large Sand bar lies within the mouth nearest to point Adams which is nearly covered at high tide. I suped on brant this evening with a little pounded fish. Some rain in the after part of the night.    men appear much Satisfied with their trip beholding with estonishment the high waves dashing against the rocks & this emence ocian.

Monday 18th Nov. 1805. Cloudy. Capt. Clark myself and 10 more of the party [15] Set out in order to go down and see the passiffic ocean.    we proceeded on round Hailys bay [16]    crossed two Rivers [17] in Sd. bay.    one of the party [18] killed a verry large turkey buzzard which had white under its wings, and was nine feet from the points of the wings, and 3 feet 10 Inches in length, and everey way proportined.    we proceeded on round high clifts of rocks where we had much trouble to pass.—    towards evening we arived at the Cape disapointment on the Sea Shore.    went over a bald hill [19] where we had a handsom view of the ocean.    we went on a Short distance on the coast and Camped [20] for the night.

Monday 18th.    The morning was cloudy. Capt. Clarke and 10 men [21] went down to Cape Disappointment, to get a more full view of the ocean; and 3 went out to hunt. In the course of the day we got some dried salmon and roots from the natives. In the evening our hunters came in with a deer, 2 brants, a squirrel, a hawk, and a flounder, [22] which the tide had thrown on a sand-bar. The Indians still remained with us, and Capt. Lewis got a specimen of their language. Those who live about the seashore and on Rogue's harbour creek, [23] a large creek that comes in on the north side of the bay, call themselves the Chin-ook nation.

Monday Novemr 18th    We had a cloudy morning.    Captain Clark, 2 Serjeants & eight of our Men [24] set out in Order to go down to Cape disappointment, (the Name of the Cape) in Order to get a satisfactory View of the Ocean &ca.

The Indians came to our Camp, from whom we purchased some dry Salmon.    Towards evening our hunters returned to our Camp; they had killed One Deer, 2 brants & a squirrel & also a large fish called Flounder, [25] which they brought with 〈us〉 them to our Camp.—    Our officers named this Cape Cape disappointment [26] on account of not finding Vessells there.—

1. Clark's route is shown as a dotted line on Atlas map 91 and on fig. 1. (back)
2. Chinook River, in Pacific County, Washington, and given as such on Atlas map 89, but in opposition to what Clark apparently applied that name on Atlas maps 82, 83. It is unnamed on Atlas map 91; fig. 1. (back)
3. Now Wallacut River, flowing into Baker Bay in Pacific County. Atlas maps 82 and 83 note it as "Chin-nook Nation," while Atlas map 89 gives it as "White brant creek," probably incorrectly. (back)
4. Perhaps Grampus griseus, grampus or Risso's dolphin, a cetacean rather than a fish. Hall, 2:892. (back)
5. On Atlas maps 89 and 91 a boat is shown at the anchoring spot, while fig. 1 has an anchor drawn at the spot. Atlas map 90 has the word "ankerage." It is on the east side of Cape Disappointment between Ilwaco and Fort Canby State Park, Pacific County. (back)
6. The cliffs are composed of siltstone and coarse-grained sandstone of the Miocene-age Astoria Formation. There is also a Quaternary-age landslide near this point containing rubble derived from the Astoria Formation. (back)
7. Their first actual specimen of the California condor, Gymnogyps californianus [AOU, 324], now nearly extinct. See above, October 30, 1805; below, February 16, 1806. Burroughs, 201–3. (back)
8. Here in the Elkskin-bound Journal Clark has inserted a sketch of the fish; it is probably a starry flounder, Platichthys stellatus. See below, March 13, 1806. Burroughs, 266; Lee et al., 830. (back)
9. Probably McKenzie Head in Fort Canby State Park. (back)
10. Clark's camp is shown on Atlas map 91, near McKenzie Head in Fort Canby State Park. A map, perhaps of the area, is overwritten by text on this page of the Elkskin-bound Journal (see fig. 3). Included with the map are the words, "Shoals & Swells," in Clark's hand. The camp was in the vicinity of the Fishing Rocks archaeological site. Archaeological work at this shell midden encountered evidence that Chinook Indians used the site as a hunting and fishing camp beginning around 1,000 years ago and continuing into early historic times. Minor (ASCR). (back)
11. There is a great deal of variation between the two entries for the courses of Clark's route. (back)
12. The whale is pictured on Atlas map 91. (back)
13. Biddle's interlineation was obviously added much later, probably in 1810, but not in his usual red ink. For Charles Willson Peale see above, September 10, 1803. (back)
14. Tillamook Head, in Clatsop County, Oregon, See Atlas map 90. The correction in distance may have resulted from Clark's visit to the area in January. Atlas map 84. (back)
15. Clark gave the other men's names in two inconsistent lists, those named included Clark, Ordway, Charbonneau, Pryor, the Field brothers, Shannon, Colter, Weiser, Labiche, Bratton, and York. (back)
16. Baker Bay, Pacific County, Washington. (back)
17. Chinook and Wallacut rivers, Pacific County. (back)
18. Reubin Field killed the expedition's first specimen of the California condor. (back)
19. Probably McKenzie Head in Fort Canby State Park, Pacific County. (back)
20. Near McKenzie Head. (back)
21. Charbonneau, Pryor, Ordway, Joseph and Reubin Field, Shannon, Colter, Peter Weiser, Labiche, and York, according to Clark. The captain's second entry for the day adds Bratton. (back)
22. Probably starry flounder, Platichthys stellatus. (back)
23. Chinook River or Wallacut River, Pacific County, Washington. The captains seem to refer to the latter as Chinook River, and the present Chinook River as White Brant Creek; this may be Gass's Rogue's-harbour Creek. (back)
24. According to Clark, the sergeants were Ordway and Pryor, and the men were Charbonneau, Joseph and Reubin Field, Shannon, Colter, Weiser, Labiche, and York. The captain's second entry for the day adds Bratton. (back)
25. Probably starry flounder, Platichthys stellatus. (back)
26. Actually named as such by Captain John Meares in 1788 when he missed the Columbia and concluded that a river did not exist here. (back)
Previous
Next