This morning we dispatched a party to the Saltworks with Sergt. Ordway    and a second with Sergt. Gass after the Elk killed over the Netul. in the evening Sergt. Ordway returned and reported that the waves ran so high in the bay that he could not pass to the entrance of the creek [1] which we had directed him to assend with the canoe. Collins and Winsor returned this evening with one deer which they had killed.    the deer are poor and their flesh by no means as good as that of the Elk which is also poor but appears to be geting better than some weeks past.—    in the forenoon we were visited by eight Clasops and Chinnooks from whom we purchased a Sea Otter's skin and two hats made of waytape and white ceder bark.    they remained untill late in the evening and departed for their village.    these people are not readily obstructed by waves in their canoes.— Sergt. Ordway brought me a specemine of a species of pine [2] peculiar to the swamps and marshes frequently overflown by the tide as this is a distinct species I shall call it No. 7.    this tree seldom rises to a greater hight than 35 feet and is from 2½ to 4 feet in diameter; the stem is simple branching diffuse and proliferous.    the bark the same with that of No. 1 only reather more rugged.    the leaf is acerose, 2/10th of an inch in width and ¾ in length.    they are firm stif and somewhat accuminated, ending in a short pointed hard tendril, gibbous, thickly scattered on all sides of the bough but rispect the three upper sides only.    those which have there insersion on the underside incline sidewise with their points upwards giving the leaf the figure of a sythe.    the others are perpendicular or pointing upwards.    is sessile growing as in No. 1 from small triangular pedestals of a soft spungy elastic bark.    the under disk of these leaves or that which grows nearest towards the base of the bough is a deep glossey green while the upper or opposite side is of a mealy whiteish pale green; in this rispect differing from almost all leaves.    the boughs retain their leaves as far back as to the sixth years growth.    the peculiarity of the bud scales observed in No 1 is observed in this species. The cone is 3½ inhes in length and 3 in circumpherence, of an ovate figure being thickest in the middle and tapering in two obtuse points. it is composes of small, flexible, thin, obtusely pointed smooth and redish brown imbricated scales.    each scale covering two small winged seeds and being itself covered in the center by a small thin inferior scale accutely pointed.    the cone is somewhat of this figure. [3]    they proceede from the side as well as the extremities of the bough but in the former case always at or near the commencement of some one years growth which is some instances are as far back as the third year.— 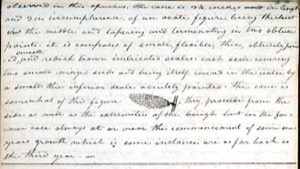 This morning we dispatched a party to the Salt works with Sergt. Ordway.    and a Second party with Sergt. Gass after the Eight Elk killed over the Netul.    in the evening Sergt. Ordway returned and reported that the waves ran So high in the Bay that he could not pass to the enterance of a Creek which we had directed him to assend with the Canoe. Collins & Windsir returned this evening with one Deer which they had Killed.    the deer are pore and their flesh by no means a[s] good as that of the Elk which is also poore but appears to be getting better than Some weeks past.    in the forenoon we were visited by a Clatsop & Seven Chinnooks from whome I purchased a Sea otter's Skin and two hats made of way tape and Silk grass and white cedar bark.    they remained untill late in the evening and departed for their village.    those people are not readily obstructed by waves in their Canoes.    Since their departure we have discovered that they have Stole an ax.— Whitehouse brought me a roab which he purchased of the Indians formed of three Skins of the Tiger Cat, [4] this Cat differs from any which I have ever Seen.    it is found on the borders of the plains and the woody Country lying along the Pacific Ocian.    this animale is about the Size or reather larger than the wild Cat of our Countrey and is much the Same in form, agility and ferosity.    the colour of the back, neck and Sides, is a redish brown irrigular varigated with Small Spots of dark brown    the tail is about two inches long nearly white except the extremity which is black; it termonates abruptly as if it has been cut off.    the belly is white with Small black spots.    butifully varigated.    the legs are of the Same Colour with the Sides and back marked with transvers stripes of black    the ears are black on the outer Side Covered with fine black hair, Short except at the upper point which is furnished with a pencil of verry fine Streight black hair, ¾ of an inch in length, the fur of this animale is long and fine.    much more So than the wild Cat of the U States but less so than the Louserva of the N West. [5]    the nativs of this Country make great use of the skins of this Cat, to form the robes which they wear; three whole Skins is the complement usually employed, and Sometimes four in each roab. Those Cats are not marked alike maney of them have but fiew Spots of a darker Colour, particularly on the Back.

Tuesday 18th.    The morning of this day was cloudy. A sergeant [7] and six men set out to go to the salt works, to bring the salt and kettles to the fort. At the same time I started with ten more to bring in meat; but the weather was so stormy, we could not get round the bay, and we all returned to the fort.

Tuesday Febry. 18th [8]    This morning clear & pleasant weather, Six of our Men [9] went from the fort with 2 Canoes to go round on the Sea coast to the Salt works.    Ten Men of our party was sent at some time, in order to bring in the Elk meat, which was left by our hunters Yesterday.    The party that were going to the Salt Camp on arriving at the bay, found the wind blowing so hard, that they had to return to the fort.—

We had several squalls of wind attended with rain in the course of this day.—    About noon several Indians belonging to the Clatsop Nation came in Canoes to the Fort.    They brought with them some Roots to trade with us,—,    which we purchased of them.    Towards evening these Indians left the Fort & embarked in their Canoes in order to return to their Village.—    Two of our hunters [10] also returned to the Fort, but had killed no Game of any kind.    The Men remaining at the fort were employed as usual in dressing Skins &ca.—

1. Again, probably the Skipanon River, Clatsop County, Oregon. According to Ordway, his party consisted of five men. Atlas maps 82, 84. (back)
2. Sitka spruce, already described by Lewis on February 4, 1806. The small stature, and enhanced, whitish stomatal bands on the upper surface, which led Lewis to believe that this was a new species, probably resulted from the brackish tidal inundation in its marsh habitat as described. All morphological features including the drawing of the pointed conescale bract correspond to those of Sitka spruce. There is a vertical line running through the first several lines of this passage, perhaps set down by Biddle. (back)
3. A sketch of the Sitka spruce cone (fig. 40; cf. fig. 31) appears here in Lewis's Codex J. p. 83. (back)
4. The first description of the Oregon bobcat. (back)
5. The wild cat is presumably the bobcat, Lynx rufus. "Louserva" (loup cervier) is the Canada lynx. (back)
6. Led by Gass, as he reports. (back)
7. Ordway, who like Gass, found the waves so high that he could not enter the Skipanon River on the first leg of his trip, and so returned to the fort. (back)
8. At this point a page has been cut from the notebook, but apparently no text is missing. (back)
9. Led by Ordway. Whitehouse says he was with Ordway the next day when he tried again, but it is not clear that he was along this day, also. (back)
10. Collins and Windsor, report the captains, who say that, in fact, they brought in one deer. (back)
Previous
Next