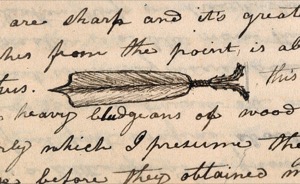 we Set out very early this morning and proceeded to the head of deer island and took brackfast.    the morning was very cold wind Sharp and keen off the rainge of Mountains to the East Covered with snow.    the river is now riseing very fast and retards our progress very much as we are compelled to keep out at Some distance in the Curent to clear the bushes, and fallin trees and drift logs makeing out from the Shore.    dureing the time we were at Brackfast a Canoe with three Indians of the Clan-nar-min-na-mon Nation came down, one of those men was dressed in a Salors Jacket & hat & the other two had a blanket each, those people differ but little either in their dress manners & Language from the Clatsops & Chinnooks    they reside on Wappato Inlet which is on the S W. side about 12 miles above our encampment of the last night and is about 2 miles from the lower point, four other Tribes also reside on the inlet and Sluce which passes on the South W. Side of the Island, the first tribe from the lower point is the Clannarminamon, on the Island, the Clackster Nation on the main S. W. Shore.    the next Cath-lah-cum-up, Clâh-in-na-ta, Cath-lah-nah-qui-ah and at Some distance further up is a tribe called Cath-lah-com-mah-up Those tribes all occupie Single Villages. we proceeded on to the lower point of the Said island accompanied by the 3 Indians, & were met by 2 canoes of nativs of the quath-lah-pah-tal who informed us that the chanel to the N E of the Island was the proper one.    we prosued their advice and Crossed into the mouth of the Chah-wah-na-hi-ooks River which is about 200 yards wide and a great portion of water into the columbia at this time it being high. The indians inform us that this river is crouded with rapids after Some distance up it. Several tribes of the Hul-lu-et-tell Nation reside on this river.    at 3 oClock P. M. we arived at the Quath lah pah tle Village of 14 Houses on main Shore to the N E. Side of a large island.    those people in their habits manners Customs and language differ but little from those of the Clatsops and others below.    here we exchanged our deer Skins killed yesterday for dogs, and purchased others to the Number of 12 for provisions for the party, as the deer flesh is too poore for the Men to Subsist on and work as hard as is necessary. I also purchased a Sea Otter robe.    we purchased wappatoe and Some pashaquar roots.    gave a Medal of the Small Size to the principal Chief, and at 5 oClock reembarked and proceeded up on the N E. of an Island to an inlet about 1 mile above the village and encamped on a butifull grassy plac, where the nativs make a portage of their Canoes and Wappato roots to and from a large pond at a Short distance.    in this pond the nativs inform us they Collect great quantities of pappato, which the womin collect by getting into the water, Sometimes to their necks holding by a Small canoe and with their feet loosen the wappato or bulb of the root from the bottom from the Fibers, and it imedeately rises to the top of the water, they Collect & throw them into the Canoe, those deep roots are the largest and best roots. Great numbers of the whistling Swan, Gees and Ducks in the Ponds. Soon after we landed 3 of the nativs came up with Wappato to Sell a part of which we purchased.    they Continued but a Short time.    our men are recoverey fast. Willard quit well & Bratten much Stronger.    we made 15 miles to day only.

Saturday 29th March 1806.    we Set out early and proceed. on. Saw blossom and wild onions [22] along the South Side    in the afternoon we passd the mo. of [blank] River [23] which came in on N. Side which is high and puts in with a Swift current.    little above we arived at the village of the [blank] nation [24] which is a large village and the most of their huts join.    this village is more decent than any I have Seen below.    we delayed at this village about 3 hours. Capt Clark bought a Robe which was made of 2 Sea otter Skins from the princepal man who he made a chief    Gave him a meddle.    he put it on his wife. Capt. Clark Gave the chief a blue blanket edged with red & Small also an old flag, which he was Satisfied with.    we bought Several fat dogs and some wa pa toes from the natives.    towards evening we proceed. on a Short distance further and Camped [25] on a handsom Green where had once been a village. Some of the natives visited us.    thier women instead of wearing the Straw & bark Short peticoats wear a Soft leather breach cloth    all above this Side of the Mountains are dressed in this way & nothing more to cover the most part of them, but those below on the coast wear the Short pticoats. Some among them all have a kind of a fur garment beaver &C. dressed and cut in narrow stripes & sewed together &C—

Saturday 29th.    The morning was pleasant with some white frost and we proceeded on early; passed some old Indian lodges, and in the afternoon came to a large village, where we were received with great kindness, and got fish and wapto roots to eat. Here we bought some dogs and waptos, and then went on again, about a mile and encamped. One of the sick men is quite recovered and the other two are getting better. [26]

Saturday March 29th    We set out early this morning & proceeded on, the Columbia River being very high & the current running very swift.    in the afternoon we passed the Mouth of a River, which was large & the Water in it very high, and makes into the Columbia River with a greadt deal of rapidity; This River lies a small distance below a large Indian Village of the Kalute Tribe 〈Nation〉 & called the Kalute River & at which place we halted & purchased from the Natives 10 fat dogs.    Captain Clarke also purchased from these Indians a Sea Otter Skin robe, for which he gave, a small piece of blue Cloth, & part of an old flag.    he also purchased from them some dried fish, Wapatoes &ca    These Indians, are a much decenter looking sett of Natives, than those who reside on, or near the Sea Coast.    The women among them wore a soft leather Breech Cloth, which they drawed tight about their breech, & is tied with a belt, & comes up forward in the manner that a breech Cloth does, & those on the Coast & near it, wore a short pettycoat, made out of Straw.    The remainder of their bodies being exposed to the Weather.—    Our Officers made a Chief, of one of those Indians, and gave him a medal; which he gave to his wife.    These Kalute tribe of Indians, are a part of the flatt head Nation.    Towards evening we proceeded on our Voyage, & went a short distance & encamped at a handsome green where their had formerly been an old Indian Village; laying on the So side of the River.    We saw on the River this day, Swan & Geese in great plenty & the Indians that we were among kill plenty of deer, if we are allowed to judge from the quantities of Vension & Skins which we saw among them. [27]

1. The Katlaminimin, or Kathlaminimin, an Upper Chinookan-language tribe then living on the northwest side of Sauvie (Lewis and Clark's Wapato) Island, Multnomah County, Oregon. See below, n. 6. "Clan-nah-min-na-mun" is a Chinookan ethnonym g-a-l/á-namn + namn, "ones who have whole(ness) of something." (back)
2. Perhaps the part of the Columbia River coming around the back side of Sauvie Island with Scappoose Bay a part of the inlet. (back)
3. Perhaps McCarthy Creek, in Multnomah County, nameless on Atlas map 80. "Kill-amucks" is present Tillamook River on the coast; the two streams' heads do not meet. (back)
4. Sauvie Island, in Multnomah County. Atlas map 80. (back)
5. The term may not refer to a tribal designation but to the Chinookan word [t]l/a'aqštaq, a derisive name meaning "round heads." They have been considered Clat-skanie Indians. See January 1, 1806. Atlas map 80; figs. 4, 6. (back)
6. These four, with the Katlaminimin noted above, were all Upper Chinookan-language groups living on or around Sauvie Island. Archaeological investigations on Sauvie Island and the adjacent Oregon shore are discussed at November 4, 1805. Atlas maps 79, 80; figs. 4, 6. "Cath-lah-cum-up" is g-a-l/á-q̓map, "ones who have the mound"; "Clâh-in-nata" is unidentified; "Cath-lah-nah-qui-ah" is g-a-l/á-nak̓ waix, "those of Nakwaix"; "Cath-lah-cam-mah-tup" may be g-a-l/á-q̓max̣tup, without clear meaning. Silverstein, 534. (back)
7. The wild chive, Allium schoenoprasum L. var. laurentianum Fern. This is the same species as the cultivated chives of Europe. The North American plants are found in wet meadows on rocky or gravelly streambanks and formerly between low and high water levels along the Columbia River from Canada to Umatilla, Oregon, but perhaps now are largely exterminated by impounded water behind dams. Lewis's citation extends the historic range of the species to a lower point on the Columbia. Hitchcock et al., 1:755. A red vertical line runs through this passage, perhaps penned by Biddle. (back)
8. In Clark County, Washington, just above the mouth of Lewis River and behind Bachelor Island. Atlas maps 79, 80; figs. 4, 6. The Cathlapotle village Nahpooitle is discussed at November 5, 1805. (back)
9. Biddle wrote the words in red and added a vertical line through several lines of the entry. (back)
10. The Latin words mons veneris, referring to the female pubic area. (back)
11. Another red vertical line running through several lines of writing. (back)
12. Scimitar, after the curves, Oriental sword. (back)
13. A sketch of the sword (fig. 1) in Lewis's Codex K, p. 14. A similar drawing appears in Codex Q, p. 88, apparently by an unknown copyist. See Moulton (SJ), 196–98. (back)
14. Cressman provides further information on these distinctive weapons. (back)
15. Behind Bachelor Island, in Clark County, in the vicinity of present Ridgefield. Atlas maps 79, 80. The camp may have been at an archaeological site upstream from the main Cathlapotle village. The site was a series of seasonal camps; the area has been extensively tested. Minor & Toepel, 79–80. See November 5, 1805. (back)
16. The ring-necked duck of March 28, 1806. (back)
17. Lewis may have been seeing several species of garter snakes: Thamnophis sirtalis, T. elegans, and T. ordinoides. Benson (HLCE), 90. (back)
18. Probably the Pacific tree frog, Hyla regilla. Ibid., 88. Cf. Cutright (LCPN), 428. (back)
19. Probably the great horned owl, Bubo virginianus [AOU, 375]. (back)
20. The belted kingfisher, Ceryle alcyon [AOU, 390]. Burroughs, 237–38; Holmgren, 31. (back)
21. The large blackbird is probably the common grackle, Quisculus quiscula [AOU, 511]; the small, probably Brewer's blackbird, Euphagus cyanocephalus [AOU, 510]. Burroughs, 255–56; Holmgren, 28. Cf. March 3, 1806. (back)
22. Wild chive, Allium schoenoprasum L. var. laurentianum Fern. (back)
23. Lewis River, Cowlitz and Clark counties, Washington. (back)
24. Nahpooitle, a village of the Cathlapotle, an Upper Chinookan-language people, Clark County, Washington, just above the mouth of Lewis River and behind Bachelor Island. The village is described in Clark's entry of November 5, 1805. (back)
25. Behind Bachelor Island, Clark County. (back)
26. Clark notes that Willard was well and Bratton stronger. (back)
27. The last portion of this sentence, from "if we are" on, is crowded between entries. (back)
Previous
Next