Twelve hunters [1]    turned out this morning in different directions agreeably to the order of last evening. Potts and Whitehouse accompanied Collins to the bear he had killed on the 16th inst. with which they returned in the afternoon.    the colours of this bear was a mixture of light redish brown white and dark brown in which the bey or redish brown predominated, the fur was bey as well as the lower pertion of the long hairs, the white next succeeded in the long hairs which at their extremites were dark brown, this uncommon mixture might be termed a bey grizzle.—

our indian woman was busily engaged today in laying in a store of the fennel roots for the Rocky mountains.    these are called by the Shoshones year-pah. [2]    at 2 P. M. 3 Indians who had been hunting towards the place at which we met with Chopunnish last fall, called by them the quawmash grounds, [3] called at our camp; they informed us that they had been hunting several days and had killed nothing; we gave them a small peice of meat which they told us they would reserve for their small children who were very hungary; we smoked with them and they shortly after departed.    early this morning the natives erected a lodge on the opposite side of the river near a fishing stand a little above us.    no doubt to be in readiness for the salmon, the arrival of which they are so ardently wishing as well as ourselves.    this stand is a small stage are warf constructed of sticks and projecting about 10 feet into the river and about 3 feet above the surface of the water on the extremity of this the fisherman stands with his scooping net, which differ but little in their form from those commonly used in our country    it is formed thus. [4]    the fisherman exercised himself some hours today but I believe without success.    at 3 P. M. J. Fields returned very unwell having killed nothing.    shortly after an old man and woman arrived; the former had soar eyes and the latter complained of a lax and rheumatic effections.    we gave the woman some creem of tartar and flour of sulpher, and washed the old man's eyes with a little eyewater.    a little before dark Drewyer R. Fields and LaPage returned having been also unsuccessfull    they had killed a hawk only and taken the part of a salmon from an Eagle, the latter altho' it was of itself not valuable was an agreeable sight as it gave us reason to hope that the salmon would shortly be with us.    these hunters had scowered the country between the Kooskooske and Collins's Creek from hence to their junction about 10 miles and had seen no deer or bear and but little sign of either.    shortly after dark it began to rain and continued raining moderately all night.    the air was extreemly cold and disagreeable and we lay in the water as the preceeding night.— 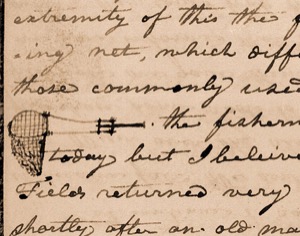 Cloudy morning    12 hunters turned out this morning in different directions agreeably to the order of yesterday. Potts and Whitehouse accompanied Collins to the bear which he had killed on the 16th and brought in the flesh and Skin.    this bear was not large but remarkably light coloured the hair of it as also the hair of all those which has been killed is very thick and long. The Squar wife to Shabono busied her Self gathering the roots of the fenel Called by the Snake Indians Year-pah for the purpose of drying to eate on the Rocky mountains.    those roots are very paliatiable either fresh rosted boiled or dried and are generally between the Size of a quill and that of a mans fingar and about the length of the latter.    at 2 P. M. 3 Indians who had been out hunting towards the place we met with the Chopunnish last fall, which place they Call the quarmash grounds.    those men had been out Several days and killed nothing.    we gave them a Small piece of meat which they told us they would reserve for their Small Children who was very hungary.    we Smoked with them and they departed. The nativs made a lodge on the opposit bank of the river a little above us at a fishing place.    as all communication is cut off between us and the nativs on the opposit Side of the river, we cannot Say by whome or for what service that lodge has been errected as no one has been near it Since it was errected this morning.    at 3 P M Jo. Field returned from the chase without killing any thing    he complains of being unwell. Son after an old man and a woman arived the man with Sore eyes, and the woman with a gripeing and rhumatic effections. I gave the woman a dose of creme of tarter and flour of Sulphur, and the man Some eye water.    a little before night Rueben Field Drewyer and LaPage returned haveing killed nothing but a large hawk    they had hunted in the point between the Kooskooske and Collins's Creek and Saw but little Sign of either deer or Bear.    the evening Cloudy, Soon after dark it began to rain and rained moderately all night—.    LaPage took a Salmon from an Eagle at a Short distance below our Camp.    this is induces us to believe that the Salmon is in this river and most probably will be here in great numbers in the Course of a fiew days.

Sunday 18th of May 1806.    cloudy.    eleven of our hunters Set out on horseback in order to go out Some distance back in the high country to make a Camp hunt.    and two men went out for the meat of the bear killed on 16th Inst    in the evening 4 of our hunters returnd.    had killd. nothing but one hawk & a pheasant.—

Sunday 18th.    The morning was cloudy, but without rain; and ten [5] of the party turned out to hunt.— None of the natives visited us yesterday, or to day; until about 2 o'clock in the afternoon, when five came that had not I seen before. They remained about an hour and had some eye-water [6] put into their eyes, which were sore; after which they went away, and an old man and his wife came for some medicine, as the old woman was sick. In the evening four hunters [7] came in and had killed nothing but some grous.