2 Sepr. description of a antient fortification [3] 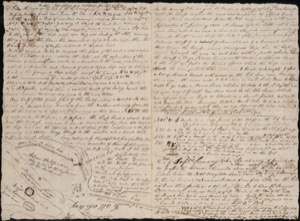 One half of the first part of the Fortification is washed into the river, a Second line, has run from the Northrn extremity parrelel with the river (as it appears to have run at that time[)] N. 56 W. this of different hith from 4 to to 10 feet—    The high land is about 3 me. from this fortress, and rise to Small mountains Say from 3 to 400 feet    the high land on the opposit or North Side of the Missourie is 110 feet forming a yellow Clay bluff to the water and is leavel back as fur as can be Seen. I am informed by the inteperter & french, that they have Seen, numbers of those fortifications in different parts of this Cty. pirtcularly on the Platt Kansies and the North of this place on the river Jacque.

two Small fortifications is on the Arc Creek on the upper side 1st ¼ of a mile up & the 2d ¼ higher, nearly Square    each angle 100 yards

Set out early and proceeded on    Passed the Island and Landed on the S. S above under a yellow Clay bluff of 110 feet high, the wind blew verry hard a head from the N. W. with Some rain and verry Cold, G. Drewnyer R. Fields Newman & howard Killed four fine Elk    w[e] had the meat all jurked and the Skins Dried to Cover the Perogue, on the Side of the Bluff I observed Bear Grass & Rhue, at Sun Set the wind luled and Cleared up Cold, the high land on the L. S. is verry high, & uneaven, that on the S. S from so to 120 foot & is leavel back    but fiew Small Streems falling into the river.

I went out and made a Survey of the antient works which is Situated in a level plain about 3 miles from the hills which are high.

A Discription of the Fortification
(1) Commenceing on the river opsid the Good Mans Island, first Course from the river is

the Same Cours continued i e

in this Course at 533 yards a Deep Pond of 73 yards Diameter perfectly round is in the Course of the bank which is about 8 feet high, from this Pond the bank it lowers gradually—    a bank about the Same hight runs near the river, and must have joined the main work at a part which is now washed into the river, this is also perfectly Streight and widens from the main work, as the river above has washed in its banks for A great distance I cannot form an Idear How those two long works joined—    where they Strike the river above, they are about 1100 yds apart, I am informed by our freench interpeters that a great number of those antint works are in Different parts of this Countrey, on the Platt River, Kansus, Jacque, Osarge Mine river &c.

〈the〉 Small one is on Island opposit the one I have Discribed, and two of our Party Saw two of those antient frtresses on the Pittiet Arc Creek on the upper Side near the mouth, [4] each angle of which were 100 yards and about 8 feet high—

Sunday 2nd Sept. 1804.    a hard Storm arose the latter part of last night    ½ past 1 oC. of wind & rain from N. W. which lasted abt. 2 hours. Cloudy this morning    we Set off eairly. Sailed a Short distance with a S. E. wind & in less than 2 hours the wind Shifted in to the N. W. which Blew hard a head, G. Drewyer R. Fields & Collins out hunting this morning on N. S.    as we passed or passing a prarie on S. S. we heard Several guns fire which we Supposed to be our hunters.    directly we heard them hollow from the Island for help to bring in their Game, R. Fields killed one Buck Elk, and Drewyer killed 2 Elk & Newman & Howard killed one on the opposite Shore; we halted to take Breakfast at 8 o.C. at the Bottom prarie, where their was an ancient fort. [5]    the Entrenchment which formed a Circle from the river in the form of a half moon, at the lower pt. End    Capt. Clark went on Shore with the compass in order to find the angles &.C.    the Boats went on to the head of Elk or Bon hommen Isd. Island, the wind Shifted into the North & Blew So heard that we were obledged to lay by at 〈the〉 a high Bluff, abo. Elk or Bon hommen [6] Isl. handsome high praries back from the river, we found plumb orchads on a Spring run & an amence Site of Grapes as before, we Scarcely passed a day as yet on the Missouri, in the time or Season of them but what we found them in great abundance &.C.    the weather is Cool & rainy to day    Capt. Clark returned to the Boat, & Informed us that had been a large ancient fortification made their. Some places remains yet 5 feet high & on one Side of it is nearly Strait across the point & strikes the river, & is more than a mile & half in length & So ancient that Some Trees Stands on the works &.C.    considerable of cottonwood Timber on the Upper part of this point    back from the river is Broken Barron hills which are verry high & Sandy &.C.

Sunday 2nd.    At 1 o'clock last night we had hard thunder, lightning and rain, which continued about two hours. We set out early in the morning, along the north side of the island: there is handsome prairie land on the south. Three of our men [7] went on the island to hunt. When we landed for breakfast, we heard several guns fired on the island, and saw six elk swimming across the river about a mile above where we had halted. Two of our men went up and killed one of them; those on the island killed three. [8] About twelve, the wind blew so hard down the river, that we could not proceed, and we landed on the north side, where there is an extensive prairie. It was cloudy and rained till 4 when it cleared up. We remained here for the night and dried our meat. On the bank opposite our camp is an ancient fortification or breastwork, [9] similar to those which have been occasionally discovered on the western waters. The two ends run at right angles to the river, and the outside, which is 2500 yards in length, parallel to it: there is no breastwork thrown up next to the river, the bank as is supposed, serving as a sufficient defence on that side. [10]

Sunday 2nd Sept. 1804.    a hard Storm of wind and rain last night which lasted about 2 hours, cloudy this morning    we Set off eairly    three men out hunting.    the hunters killed three Elk.    we halted at 8 oC on the S. S. where their was an ancient fortification in the form of a half moon [11]    it appeared that one Side had washed into the river.    Capt. Clark took the dimentions of it.    the wind high from the North So that we were oblidged to lay too at a high prarie where we found plumbs & Grapes [12] a pleanty—

Sunday September 2nd    Last night we had a hard Storm of Wind, accompanied with Rain, which was very heavy.    it lasted for near 2 hours    we set off early this morning having cloudy weather, Three of our Men went a hunting & Return'd to us, having killed 3 Elk, which they brought to us.—

We came too with our boat at 8 o'Clock A. M. on the South side of the River, near where the remains of an Ancient fortification stood, it was in the form of a half Moon, and had the appearance of once being very Strong, One side of it had washed into the River.    Captain Clark took the dimensions of it    being 1¾ Miles in length 600 Yards wide in the Center.—    The wind raising & blowing hard from the North, we proceeded on but a small distance, and came too at a high Priari, where we found Plumbs & Grapes in great abundance

1. In Bon Homme County, South Dakota. The site must now be inundated by Lewis and Clark Lake. It is called "yellow banks" on Evans's map 1 (Atlas map 7). Atlas map 18; MRC map 31. (back)
2. Beargrass is an obsolete name for yucca. The species here is Yucca glauca Nutt., soapweed. Fernald, 437; Barkley, 546. "Rhue" is apparently a misspelling of "rhus" and could refer to Rhus glabra L., smooth sumac. Barkley, 223. If so, this is one of the few instances of Clark using a Latin term for identification. Both species are commonly found growing together on the hillsides of this area. Or Clark could mean rue. (back)
3. Clark conducted an elaborate survey of these formations in Knox County, Nebraska, which the captains took to be artifacts comparable to those of the Mound Builders in the Ohio valley. Descriptions appear in the Field Notes, Codex B, and Codex N. Clark made sketches of the area on document 51 of the Field Notes (fig. 1). Sketches in Codex N and additional notes were probably made on the return trip and will appear in a later volume. The captains' imaginations and their knowledge of military fortifications misled them; all these formations were natural sand ridges. See Lewis. Clark uses technical terms relating to fortifications in his description:


"ravilene"—    a ravelin is a detached work of two lines forming an angle in front of the main fortification.

"Saleport"—    a sallyport is an opening through which the defenders could make a sally, that is, a small, quick attack, and then retreat.

"Glassee"—    a glacis is a natural or artificial slope in front of a fortification, on which the attackers would be exposed to fire from the defenders.

"gouge"—    a gorge is the entrance into some outlying work.


"horn work"—    a type of detached work joined to the main fortification by parallel walls. (back)
4. Present Bow Creek, in Cedar County, Nebraska. The "fortifications" were again natural formations. Lewis. (back)
5. Clark conducted a survey of the supposed fortifications across from Bon Homme Island in Knox County, Nebraska. The formations are actually the result of natural sand ridges. (back)
6. "Bon hommen" appears to be a later addition in both instances of its use in this entry. (back)
7. Drouillard, Reubin Field, and John Collins. (back)
8. The successful hunters were Drouillard, Reubin Field, Thomas P. Howard, and John Newman. (back)
9. Gass, like the rest of the party, believed these natural sand ridges opposite Bon Homme Island in Knox County, Nebraska, to be a man-made fortification; see Clark's detailed survey of this date and McKeehan's note for the day. (back)
10. McKeehan's note: "The description of this Breastwork corresponds exactly with the accounts given of numerous ancient fortifications discovered in the Western Country, which are known and represented to be generally of an oblong form, situated on strong and well chosen ground, and contiguous to water. These works from the examinations which have been made, are supposed to have been erected more than 1000 years ago; or 700 before the discovery of America by Columbus. They appear to have existed about the same period, throughout all, or the greater part of that vast tract of Country bounded by the Alleghany Mountains on the east and the Rocky Mountains on the west, and including the most favourable latitudes of North America. Perhaps some have been found east of the Allegheny Mountains. Have numerous ancient nations, more civilized and disposed to labour than any of the modern Indian tribes, inhabited this Country? And have these fortifications been their humble substitutes for the walled and fortified Cities of the old world in remote ages? Or, has this been the Roman Empire of the New World? and has it been destroyed by other hordes of barbarians, as fierce and cruel as those who destroyed that of the old[?]" (back)
11. The entire party believed these natural sand ridges opposite Bon Homme Island in Knox County, Nebraska, to be man-made fortifications; see Clark's detailed survey of this day. (back)
12. Perhaps river-bank grape, Vitis riparia Michx. (back)
Previous
Next