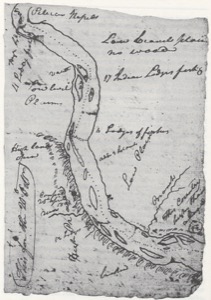 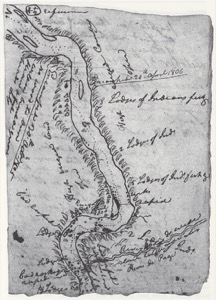 Killed 2 large speckle guls [3] 4 Duck in Malade [duckinmallard] Small ducks the flavour of which much resembles the Canvis back [4]    no timber of any kind on the river, we Saw in the last Lodges acorns of the white oake [5] which the Inds. inform they precure above the falls    The men are badly dressed, Some have scarlet & blue cloth robes.    one has a Salors jacket, [6] The women have a Short indiferent Shirt, a Short robe of Deer or Goat Skins, & a Small Skin which they fastend, tite around their bodies & fastend. between the legs to hid the [7] 〈passed on the Stard. and on the Lard. one Small in the Middle of the river at 16 miles〉

A cool morning wind S. W.    we concluded to delay untill after brackfast which we were obliged to make on the flesh of dog.    after brackfast we gave all the Indian men Smoke, and we Set out leaveing about 200 of the nativs at our Encampment; passd. three Indian Lodges on the Lard Side a little below our Camp which lodges 〈we〉 I did not discover last evening, passed a rapid at Seven miles one at a Short distance below we passed a verry bad rapid, a chane or rocks makeing from the Stard. Side and nearly Chokeing the river up entirely with hugh black rocks, [8] an Island below close under the Stard. Side on which was four Lodges of Indians drying fish,—    here I Saw a great number of pelicons on the wing, and black Comerants. [9]    at one oClock we landed on the lower point of 〈Some〉 an Island at Some Indian Lodges, a large Island on the Stard Side nearly opposit and a Small one a little below on the Lard Side    on those three Island I counted Seventeen Indian Lodges, [10] those people are in every respect like those above, prepareing fish for theire winter consumption    here we purchased a fiew indifferent Dried fish & a fiew berries on which we dined—(On the upper part of this Island we discovered an Indian vault[)] our curiosity induced us to examine the methot those nativs practicd in disposeing the dead, the Vaut was made by broad poads [NB: boards] and pieces of Canoes leaning on a ridge pole which was Suported by 2 forks Set in the ground Six feet in hight in an easterly and westerly direction and about 60 feet in length, and 12 feet wide, in it I observed great numbers of humane bones of every description perticularly in a pile near the Center of the vault, on the East End 21 Scul bomes forming a circle on Mats—; in the Westerly part of the Vault appeared to be appropriated for those of more resent death, as many of the bodies of the deceased raped up in leather robes lay [NB: in rows] on board covered with mats, &c    [NB: when bones & robes rot, they are gathered in a heap & sculls placed in a circle.]    we observed, independant of the canoes which Served as a Covering, fishing nets of various kinds, Baskets of different Sizes, wooden boles, robes Skins, trenchers, and various Kind of trinkets, in and Suspended on the ends of the pieces forming the vault; we also Saw the Skeletons of Several Horses at the vault & great number of bones about it, which Convinced me that those animals were Sacrefised as well as the above articles to the Deceased.)    after diner we proceeded on to a bad rapid at the lower point of a Small Island on which four Lodges of Indians were Situated drying fish; here the high countrey Commences again on the Stard. Side leaveing a vallie of 40 miles in width, from the mustle Shel rapid.    examined and passed this rapid close to the Island    at 8 miles lower passed a large Island near the middle of the river a brook on the Stard. Side and 11 Islds. all in view of each other below, a riverlit [NB: rivulet] [11] falls in on the Lard. Side behind a Small Island a Small rapid below. The Star Side is high rugid hills, the Lard. Side a low plain and not a tree to be Seen in any Direction except a fiew Small willow bushes which are Scattered partially on the Sides of the bank

The river to day is about ¼ of a mile in width; this evening the Countrey on the Lard. Side rises to the hight of that on the Starboard Side, and is wavering—    we made 42 〈days〉 miles to day; [12] the current much more uniform than yesterday or the day before. Killed 2 Speckle guls Severl. ducks of a delicious flavour.

Sunday 20th Oct. 1805.    a clear frosty morning.    we Set out eairly.    proceeded on    passed a pleasant part of the County level Smooth plains but no timber.    the River Smooth.    we Saw Some pilicans and abundance of ravens and crows, [13] as the Shores are lined with dead Sammon.    about 12 oClock we halted at a village to dine where we bought a fiew roots &C. and Saw among them a number of articles which came from white people. Such as copper kittles Scarlet &C.    passed many rapid places of water.    the country continues as yesterday    our hunters who went in the small canoe killed nine ducks and a goose to day.    we came 46 miles this day.    and Camped [14] on the Starbord Side    no wood except a fiew Small willows.—

Sunday 20th.    A fine clear frosty morning. We set out early; passed along a handsome part of the river; saw some pelicans and gulls. And as the shores are lined with dead salmon, there are abundance of crows and ravens. Vast quantities of these fish die at this time of the year. At noon we came to an Indian camp on the point of a large island, where we stopped and got some fish and other provisions. We here saw some articles which shewed that white people had been here or not far distant during the summer. They have a hempen seine and some ash paddles which they did not make themselves. At 1 o'clock we proceeded on again, went 42 miles, and encamped without any of the natives being along, which is unusual on this river. We could not get a single stick of wood to cook with; and had only a few small green willows.

Sunday 20th Oct. 1805.    a clear frosty morning.    we Set out eairly.    passed a handsom peace of the River    the country low Smooth plains on each Side.    Saw Some pillicans, and abundance of crows & ravens, as the Shores is lined with dead Sammon.    about 12 oClock we came to a large Indian Camp on the point of a large Island.    we halted to dine.    we bought Several Small articles from the natives and Saw Some articles which came from Some white people Such as copper kittles, red cloth Some arsh paddles &c.    we proceeded on    passed a great nomber of Indian Camps, where they had abundance of fish hung on Scaffels to dry.    passed over Several rapids to day but no exident hapened.    the country continues as usal    the hunters killed 9 ducks and a goose this day.    we Come 46 miles and Camped on the Stard. Side.    no wood only a fiew Small Sticks, & green willow &c.    we Saw Some akehorns among the natives which is a Sign of oak being in the country for they boil and eat them.    we Saw red cloth which appeared to have come from [white?] people this last Sommer.—

Sunday October 20th    A clear frosty morning, We set out early on our Voyage, & passed a handsome piece of the River, where the Country lay low & smooth plains lying on both sides of the River, We saw some Pelicans & a number of Crows & Ravens, which we supposed to be occasiond from the very great quantity of dead Salmon, which the River Shores were lined with.—    About 12 o'Clock A. M. we came to where, there was a very large Camp of Indians, laying on the point of an Island.    We halted to dine at that place.    We purchased from those Indians, several small articles & saw among them some articles which 〈they〉 must have been originally purchased from white people.    They were Copper kettles, red Cloth, Ash paddles neatly made; knives &ca.    We proceeded on, and passed a great number of Indian Camps, which were inhabited in all of which the Natives had abundance of Salmon hung up on scaffolds to dry.    We also passed over a number of Rapids but without any accident, happening to us.—

The appearance of the Country is the same as Yesterday.    Our hunters killed 9 Ducks, & a goose this day in the River.    In the evening we encamped on the North side of the River, where we found no other article to make fire with, but small sticks & green Willows.    We saw this day among the Natives, some Acorns, which they roasted & Eat, and some red Cloth, which appeared not to be long Imported from Europe.—

1. Opposite this course in the Elkskin-bound Journal appears a sketch map showing part of the route for October 20, 1805, between the mouths of the Umatilla and John Day rivers (not shown), and the camp of April 1806, on the return journey. (back)
2. Opposite this material in the Elkskin-bound Journal is a sketch map showing the party's route for about October 20–21, the camp of October 20, and return campsites of April 23 and 24, 1806. It is in the area of present John Day River ("River de Page"), which they reach on October 21. (back)
3. Coues (HLC), 2:652 n. 27, considers these immature specimens that cannot be identified. (back)
4. Canvasback, Aythya valisineria [AOU, 147]. (back)
5. Oregon white, or Garry, oak, Quercus garryana Dougl. ex. Hook., is the only white oak species in Washington. It occurs mainly west of the Cascades but extends up the Columbia gorge to central Klickitat County, approximately twenty miles above The Dalles. It was a plant new to science. Hitchcock et al., 2:85; Little (CIH), 166-W; Cutright (LCPN), 229, 244. (back)
6. As they neared the coast they were seeing increased signs of at least indirect white contact. Beyond the blankets and other trade goods they had seen among the mountain tribes, sailors' clothing was a clear indication of the visits of seagoing traders on the Pacific shore. (back)
7. Here Clark has a symbol somewhat in the form of his sun symbol and perhaps representing the women's covered parts. (back)
8. The three Indian lodges are shown at the bottom of Atlas map 75 and the very bad rapid is shown as "Pelecan rapid" on Atlas map 76. This appears to be the area of Crow Butte State Park, Benton County, Washington. The rocks here are middle Miocene basalts belonging to the Priest Rapids Member of the Wanapum Basalt and younger members of the Saddle Mountain Basalt. Both basalts are part of the Yakima Basalt Subgroup of the Columbia River Basalt Group. Certain portions of the basalt are less fractured and hence more resistant to erosion. (back)
9. The American white pelican, Pelecanus erythrorhynchos [AOU, 125], and the double-crested cormorant, Phalacrocorax auritus [AOU, 120]. See below, March 6, 1806, for a description of the cormorant. Burroughs, 182; Holmgren, 29. Their appearance was the reason for naming the rapids on Atlas map 76. (back)
10. Shown on Atlas map 76. (back)
11. Possibly later Willow Creek, in Gilliam County, Oregon. Atlas map 76. (back)
12. Camp was probably in the vicinity of present Roosevelt, Klickitat County, Washington. Atlas map 76. (back)
13. The common raven, Corvus corax, and the western variety of the common crow, C. brachyrhynchos hesperis. (back)
14. Probably in the vicinity of Roosevelt, Klickitat County, Washington. (back)
Previous
Next