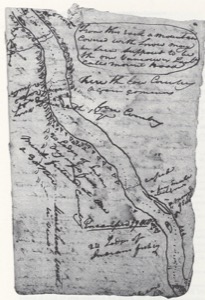 P. Crusat played on the Violin which pleasd and astonished those reches who are badly Clad, ¾ with robes not half large enough to cover them, they are homeley high Cheeks, and but fiew orniments. I Suped on the Crane which I killed 〈yesterday〉 to day.

This day we made 36 miles

Saturday 19th Oct. 1805.    a clear cold morning.    the natives brought us Some pounded Sammon.    about 7 oC A M we Set out    proceeded on    passd high clifts of rocks on each Side of the River.    the natives are verry numrous.    our officers gave one [12] a meddle and Some other small articles.    this morning passd. Several Small villages    the Savages all hid themselves in their flag loges untill we passed them.    the Indians are numerous along the River.    the villages near each other and great quantitys of Sammon drying.    we passed over Several rapids which are common in this River.    we discovred a verry high round mountain a long distance down the River which appears to have Snow on the top of it.    we came 36 miles this day and Camped on the South Side    an Indian village on the opposite Shore    a nomber of the natives came over the River in their Small canoes to see us.    when any of these Savages dye they bury them and all their property with them and picket in their grave yard.    even their canoes are put around them.—

Saturday 19th.    The morning was clear and pleasant, with some white frost. A number of the natives came to our camp, and our Commanding Officers presented one of them with a medal and other small articles. At 8 o'clock we proceeded on; passed some islands and bad rapids, but no accident happened. We also passed a great many Indian camps. In the whole country around there are only level plains, except a few hills on some parts of the river. We went 36 miles and halted opposite a large Indian camp; and about thirty-six canoe loads of them came over to see us; some of whom remained all night; but we could not have much conversation with them as we did not understand their language. [13] They are clothed much in the same manner with those at the forks above. The custom prevails among these Indians of burying all the property of the deceased, with the body. Amongst these savages when any of them die, his baskets, bags, clothing, horses and other property are all interred: even his canoe is split into pieces and set up round his grave.

Saturday 19th Oct. 1805.    a clear cold morning.    we took an eairly breakfast.    the Natives came to See us in their canoes.    brought us Some fish which had been roasted and pounded up fine and made up in balls, which eat verry well.    about 7 oC. A m. we Set out and proceeded on down the R.    passed high clifts of rocks on each Side    passd. over Several rockey rapids.    our officers gave one of the Natives we left this morning a meddel.    we passed Several Islands on which was Indian fishing Camps.    the natives all hid themselves in their flag lodges when they Saw us comming.    the Indians are numerous    the camps near each other along the Shores    the River pleasant only at the rapid which are common    we passd. over Several today but no exident hapened.    the Country around level plains except Some hills & clifts along the Shores.    we discovred a high hill or mountn a long distance down the River which appears to have Snow on it    we 〈came〉 went 36 miles this day and Campd opposite a large Indian Camp on the South Side.    a great nomber of the natives come over in their canos to see us.    when any of these natives die they deposite all their property with them.    we Saw one of their grave yards to day, even a canoe was Split in peaces and Set up around the yard Several other art. also.

Saturday October 19th    This morning was clear & cold, We took an early breakfast, the Natives still continuing to visit us, bringing with them some Salmon, which they had roasted & pounded fine & made up into Balls, which eat very well; About 7 oClock A. M. We proceeded on down the Columbia River, We passed by Clifts of rocks, lying on each side of the River, & also rockey rapids.    We passed by several Islands, on which were Indian fishing Camps.    The Natives all hid themselves (on these Islands on seeing us,) in their Flag lodges.    We now begin to find the Indians very numerous, and their Camps lay near each other along the Shores on both sides of the River, We found the day pleasant & the Navigation of the River easy, excepting at the Rapids several of which we passed over this day, without any accident happening.—

The Country as we passed along is level plains, and along some part of the Shores are some hills & Clifts.    We discovered a high hill or mountain laying a long distance down the River which appears to have Snow on it.—    We came 36 Miles this day, & encamped opposite to a large Indian Camp, which lay on the South side of the River.    A number of the Natives came over to see us, & behaved very friendly.—    These Indians have a custom among them, that when any of them die, they deposit all their property with them.—    We saw one of their grave Yards this day, & even to a canoe, that belonged to the deceased person; was split up into pieces, and set up round the grave Yard

1. Evidently Yelleppit was chief of the Walula (or Walla Walla) tribe, although it has been suggested that he was a Cayuse leader named Ollicutt known to fur traders in the area a few years later. Ronda (LCAI), 167, 220–21; Ruby & Brown (CIIT), 22–23; Ross, 137–38; Glover, 350. The term yelépt means "friend, blood brother" in Nez Perce; yalɨ́pt means "trading partner" in Shahaptian. Sometime in the 1890s a Jefferson peace medal, perhaps from the expedition, was discovered on an island (possibly Goat Island) at the mouth of the Walla Walla River; it may be the one given to Yelleppit at this time or on the party's return trip in 1806. It is today a part of the Lewis and Clark items of the Oregon Historical Society, Portland. Cutright (LCIPM), 164; Prucha (IPM), 16–24, 90–95, Strong (SACR), 208. (back)
2. Hat Rock retains its name from Lewis and Clark and sits prominently in Hat Rock State Park, Umatilla County, Oregon. Several miles upstream the party passed today's Washington-Oregon border. (back)
3. Probably not Mt. St. Helens, which would not be visible from their location, but Mt. Adams, east of the main Cascade Range in Yakima County, Washington. Glover, 312 and n. 15. (back)
4. Opposite this course in the Elkskin-bound Journal Clark sketched a map showing the journey from Hat Rock to beyond the Umatilla River (not shown) and the campsite of October 19, 1805. (back)
5. These people were Umatillas, or perhaps Cayuses, living near present Plymouth, Benton County, Washington, opposite the mouth of the Umatilla River, which the captains did not notice on the outbound journey. Ronda (LCAI), 167–68, 285 n. 14; Atlas map 75. (back)
6. A crane "of the Common Kind" in Codex H; probably a sandhill crane. See above, July 21 and 29, 1805, for more description. (back)
7. An indication, perhaps, that the sign language had penetrated this far from the Great Plains. Many Columbia Plateau tribes made buffalo-hunting trips to the plains, where they could have picked up the signs. (back)
8. The six-mile-long island may be later Techumtas Island, while that referred to as having five lodges may be later Sheep Island. Osborne, 131, mentions the island with seven lodges. Atlas map 75; Osborne, Bryan, & Crabtree, 267–306; Ray (NVCB), 150–51. (back)
9. In the area of present McNary Dam. "Muscle Shell rapid" on Atlas map 75. (back)
10. At this point in Codex H (p. 41), in the right margin and at right angles to the text, Clark has written "See description." There is also a large "X" through this passage. (back)
11. Apparently between Irrigon and Boardman, Morrow County, Oregon. Atlas map 75. The island could be Blalock Island, known as ama⊃ama'pa ("island") by the Umatillas. Archaeological work performed on Blalock Island in the late 1950s and 1960s has not yet been fully reported. There are several sites in this area of Plymouth, Washington, which are likely candidates for the numerous lodges noted by Clark. Ray (NVCB), 151; Alexander; Galm et al. (back)
12. Yelleppit, chief of the Walula, or Walla Walla, Indians. (back)
13. Probably Umatilla Indians living in the vicinity of Plymouth, Benton County, Washington, but possibly Cayuses. (back)
Previous
Next