Cloudy morning wind from the S. E.    sent out the men to hunt and examin the country, they soon returned all except Drewyer and informed me that the wood was so thick it was almost impenetrable and that there was but little appearance of game; they had seen the track of one deer only and a few small grey squirrels. [2]    〈with yellow th〉 these suirrels are about the size of the red squirrel of the lakes and eastern Atlantic States, their bellies are of a redish yellow, or tanners ooze [3] colour the tale flat and as long as the body eyes black and moderately large back and sides of a greyish brown [4]    the brier [5] with a brown bark and three laves which put forth at the extremety of the twigs like the leaves of the blackbury brier, tho' is a kind of shrub and rises sometimes to the hight of 10 fe[et]    the green brier yet in leaf; [6] the ash with a remarkable large leaf; [7] the large black alder. [8]    the large elder with skey blue buries. [9]    the broad leave shrub [10] which grows something like the quill wood but has no joints, the leaf broad and deeply indented    the bark p[e]als hangs on the stem and is of a yelowish brown 〈yellow〉 colour.    the seven bark is also found here as is the common low cramburry—there is a wild crab apple which the natives eat    this growth differs but little in appearance from that of the wild crab of the Atlantic States.    but the fruit [11] consists of little oval burries which grow in clusters at the extremities of the twigs like the black haws.    the fruit is of a brown colour, oval form and about double as large as the black haw; the rind is smoth and tough somewhat hard; the seed is like that of the wild crab and nearly as large; the pulp is soft of a pale yellow coulour; and when the fruit has been touched by the frost is not unpleasant, being an agreeable assed.    the tree which bears a red burry in clusters of a round form and size of a red haw. [12]    the leaf like that of the small magnolia, and brark smoth and of a brickdust red coulour    it appears to be of the evergreen kind.—    half after one oclock Drewyer not yet arrived.    heard him shoot 5 times just above us and am in hopes he has fallen in with a gang of elk.— 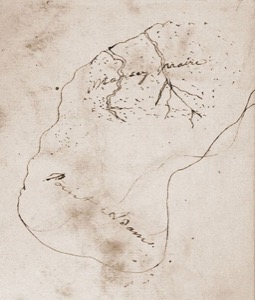 Cloudy windey morning wind from the East, Sent out 2 hunters in the woods, I intended to take 5 men in a Canoe and hunt the marshey Islands above, found the wind too high & returned to partake of the dried fish, The day Some what Cooler than usial, but Scercely perceveable.    began to rain at Sun Set and Continued 〈untill〉 half the 〈oClock〉 night.    my hunters returned without any thing 〈except〉 Saw 2 gang of Elk    a disagreeable Situation, men all employed in mending their leather Clothes, Socks &c. and Dressing Some Leather. The Sea which is imedeately in front roars like a repeeted roling thunder and have rored in that way ever Since our arrival in its borders which is now 24 Days Since we arrived in Sight of the Great Western Ocian, I cant Say Pasific as Since I have Seen it, it has been the reverse. Elegant Canoes

A cloudy windey morning wind from the East, dispatched two hunters, I deturmined to take a Canoe & a fiew men and hunt the marshey Islands above Point William, the Wind rose So high that I could not proceed, and returned to partake the dried fish, which is our Standing friend, began to rain hard at Sun Set and Continued.    my hunters returned without any thing haveing Seen 2 parcels of elk    men all employed to day in mending their leather Clothes, Shoes &c. and Dressing leather.

The emence Seas and waves which breake on the rocks & Coasts to the S W. & N W roars like an emence fall at a distance, and this roaring has continued ever Since our arrival in the neighbourhood of the Sea Coast which has been 24 days Since we arrived in Sight of the Great Western; (for I cannot Say Pacific) Ocian as I have not Seen one pacific day Since my arrival in its vicinity, and its waters are forming and petially [perpetually] breake with emence waves on the Sands and rockey Coasts, tempestous and horiable.    I have no account of Capt. Lewis Since he left me.

Sunday 1st December 1805.    a cloudy morning. Several of our men are unwell living on pounded Sammon only.

Sunday 1st Decr. 1805.    The whole of this day was cloudy. Some of the hunters went out but had not the fortune to kill any thing, not even a duck.

Sunday Decmr. 1st    A dark cloudy morning.    We had in the course of this day a little rain, & are all anxiously waiting for the arrival of Captain Lewis.    Several of our party are still unwell, & we have nothing still to subsist on but pounded Salmon.    Our hunters went out & saw several Elk but got none of them

1. On the last page of Codex Ia is the following in Clark's hand: "Capt. Lewis is rough notes when he left Capt. Clark near the mouth of Columbia for a few days to examine the S. W. side." (back)
2. Probably Richardson's red squirrel, Tamiasciurus hudsonicus richardsoni, a new species; see also February 24 and 25, 1806. Burroughs, 98–99; Cutright (LCPN), 274, 446. (back)
3. A decoction of vegetable material used in tanning. (back)
4. Here in Codex Ia, p. 7, is a sketch of Point Adams. (back)
5. Salmonberry, Rubus spectabilis Pursh, with its characteristic brown, shredding bark, terminal leaves, and upright, shrubby habit. Its edible uses were important to local natives. Hitchcock et al., 3:182; Gunther (EWW), 35. See also February 11, 1806. (back)
6. Pacific blackberry, as noted earlier. See also February 11, 1806. (back)
7. Probably bigleaf maple. (back)
8. The red alder as before. (back)
9. Probably the red elderberry, Sambucus racemosa L. var. arborescens (T. & G.) Gray, common to the Fort Clatsop area and an important understory shrub of the Sitka spruce vegetation zone. Lewis may be confusing the plant with the blue elderberry, S. cerulea Raf. (formerly S. glauca Nutt.), because of the lack of fruit at this season, thus giving the two species a similar appearance. The blue elderberry is the one observed in the Rocky Mountains and noted on February 7, 1806. Hitchcock et al., 4:462–63; Franklin & Dyrness, 61; Little (MWH), 185-NW; cf. Cutright (LCPN), 260, 419. (back)
10. Ninebark, Physocarpa capitatus (Pursh) Kuntze. The "seven bark" is not a separate plant in this instance, but a further reference to ninebark; it relates to the common ninebark in the East, P. opulifolius Maxim. Hitchcock et al., 3:125–26; Bailey, 499. (back)
11. Lewis gives here an excellent botanical description of the fruit of the previously noted Oregon crabapple. (back)
12. This is the first diagnostic description of the Pacific madrone, Arbutus menziesii Pursh, which indeed has clusters of round berries, with evergreen leaves like a magnolia and a smooth, brick-red bark. It has some ethnobotanical and medicinal uses. Little (CIH), 100-W; Hitchcock et al., 4:4; Gunther (EWW), 44; Cutright (LCPN), 244, 402–3. (back)
Previous
Next