June 5th Tuesday, Jurked the Vennison Killed yesterday, [1] after Seting over the Scouting Party or hunder of 3 men Set out at 6 oClock    Course N 57° W to a pt. on S. Sd. 5 ms.    passed a Creek on L. Sd. I call Lead C [2] of 15 yds    passed one on the S. Called Lit: good-womans Creek [3] about 20 yds. wide    Passed a Willow Isd.    a Butifull Prarie approaching near the river above Lead C & extends to the Mine river [4] in a westerly Derection, passed the Mouth of the Creek of the Big Rock [5] 15 yds Wide at 4 ms. on the Lbd Sd.    at 11 oClock brought a Caissie [cajeu] in which was 2 men, from 80 League up the Kansias River, where they wintered and caught a great qty of Beever but unfortunattey lost it by the burning of the plains, the Kansas Nation [6] hunted on the Missourie last Winter and are now persueing the Buffalow in the Plains, passed a Projecting Rock called the Manitou a Painting [7]    from this Deavel to the Pt. on the Lbd Side N 23° W 7½ Ms. The Same course 2 ½ ms. Creek Cld. Manitou [8]    passed a 〈large Isd.〉 on the Lbd. Side about 40 yd. wide, a Sand bar in the middle of the River    passed up between the Sand & L. Shore one Mile to a Small Creek 10 yd. wide, (I call Sand C). [9] We run on the Sand and was obliged to return to the Starbd Side, I am verry unwell with a Slight feever from a bad cold caught three days ago at the Grand' so' [Osage?] R—    passed a Small Willow Isd. on S. Side, a large one in the Middle of the river, [10] York Swam to the Isd. to pick greens, and Swam back with his greens, the Boat Drew too much water to cross the quick Sands which intervened, She draws 4 foot water, a fair wind    our mast being broke by accidence provented our takeing the advantage of it    passed the lower point of a large Island, opposit the Current devides between 〈three〉 4 Small Isds on the St Side.    we found the water excessively hard for 12 Miles as we were oblged to pass up the center of the Current between two of the Isds. & round the heads of the other 2    the Current Setting imediately against the points which was choked up with Drift for a mile—    Above those Isd. on the St. Side we camped altogeth[er] [11]    our Hunter or Spis [spies] [12] discovered the sign of a war party of abt. 10 Men [13]

after Jurking the meet Killed yesterday and Crossing the hunting party we Set out at 6 oClock, from the last Course & distance, N 51° W. 5 ms. to a pt. on the St: Sd.    passed a Small Creek on the Ld. S: I call Lead C.    passed a Creek on the S. S. of 20 yds. wide Cald. Lit: [NB: Little] Good Womans C.    on the L. S. a Prarie extends from Lead C. parrelel with the river to Mine river, at 4 ms. Passed the Creek of the big rock about 15 yds. wide on the L. Sd.    at 11 oClock brought too a Small Caissee [NB: raft made of two canoes tied together] in which was two french men, from 80 Leagues up the Kansias [NB: Kanzas] R. where they wintered, and Cought a great quantity of Beaver, the greater part of which they lost by fire from the Praries, those men inform that the Kansas Nation are now out in the plains hunting Buffalow, they hunted last winter on this river    Passed a projecting rock on which was painted a figue [14] and a Creek at 2 ms. above Called Little Manitou Creek from the Painted rock    this Creek 20 yds. wide on the L. Sd.    passed a Small Creek on L. S. opposit a Verry bad Sand bar of Several ms. in extent, which we named Sand C    here my Servent York Swam to the Sand bar to geather greens for our Dinner and returnd with a Sufficent quantity wild Creases [NB: Cresses] or Teng [NB: Tongue] grass, [15] we passed up for 2 ms on the L. S. of this Sand and was obliged to return, the Watr. uncertain the quick Sand Moveing    we had a fine wind, but could not make use of it, our Mast being broke, we passed between 2 Small Islands in the Middle of the Current, & round the head of three    a rapid Current for one mile and Camped on the S. S. opsd. a large Island in the middle of the river; one Perogue did not get up for two hours, our Scout discovd. the fresh sign of about 10 Inds. I expect that those Indians are on their way to war against the Osages nation probably they are the Saukees 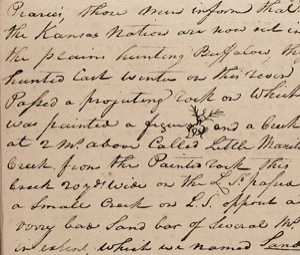 Tuesday June 5th 1804.    a fair 〈day〉    passed Lead Creek on South Side of the River & Little Good woman Creek on the N. Side, came 9 miles.    passed the Creek of the Big Rock 15 yds. wide, at a 11 oClock we met 2 Frenchmen in 2 canoes locked together Loaded with Peltry &C.    they came from 80 Leagues up the Kansias River, [16] where they wintered, then we passed a high Clifts of Rocks on which was painted the pickture of the Devil on South Side of the River.    we Encamped on the N. Side of the River at the upper point of an Island.    the land is Rich well watered &.C.    the hunters killed 2 Deer this day—

Tusday June 5th    fair day    pased Lead Creek on South Side of the River—    Littel Good woman Creek on the N. Side    Came 9 miles    past the Creek of the Big Rock 15 yads wide    at a 11 〈mil〉 oClock we met 2 French in 2 conoes lashed together Loaded with peltry &c.    they Came from 80 Leages up the Kensier River whare they wintered    water Strong    past Severall Isd. Came 15 miles    encamped on the N. Side at the uper pint of Isd.    the land is Good well timberd well waterd    ouer hunters Kild one Deer

Tuesday June 5th    We embarked early this Morning & proceeded on our Voyage, and passed a Creek lying on the South side of the River, the name unknown, in the evening we encamped on the same side of the River, our course being still West by South

1. Jerking was done by cutting meat into very thin strips and drying it in the sun. The finished product was commonly used as a travel ration by Indians, trappers, and frontiersmen in general. "Jerky" comes from the Spanish charqui, itself derived from a Quechua Indian word. Wentworth; Fletcher & La Flesche, 2:344–45. (back)
2. Perhaps either Rock Creek or Mud Creek, in Cole County. MRC map 7. (back)
3. Bonne Femme Creek, in Boone County, Missouri. Ibid. (back)
4. Lamine River, in Cooper County, Missouri. See below, June 8, 1804. (back)
5. Possibly either Rock Creek or Mud Creek, in Cole County, Missouri. MRC map 7. (back)
6. The Kansa, or Kaw, people were a small tribe residing on the Kansas River when first known to Europeans in the late seventeenth century. They spoke a Siouan language of the Dhegiha group, closely related to Osage. Their economy was based on hunting and horticulture. In 1804 their village was on the Blue River near present Manhattan, Kansas. The tribe gave its name to both the state and the river. Hodge, 1:653–56; Swanton, 293–94; Wedel (KA), 50; Unrau. (back)
7. See fig. 11. A more elaborate version (fig. 12) is in the Codex A entry for this day. (back)
8. Moniteau Creek reaches the Missouri just east of the Moniteau-Cole county line, Missouri. "Manitou" is a French version of an Algonquian word designating a spirit, and here probably refers to the figure on the rock, as Clark indicates. Hodge, 1:800–801; MRC map 7. (back)
9. Perhaps Factory Creek, near the Moniteau-Cole county line. MRC map 7. (back)
10. Perhaps the later Ville Monteau Island. Ibid. (back)
11. In Boone County, in the neighborhood of the later town of Sandy Hook on the opposite shore. "Altogether" may mean that they kept the camp compact because of the report of the war party. MRC maps 7, 8. (back)
12. "Spy" on the frontier was virtually synonymous with "scout." (back)
13. Under the latter part of this entry on this sheet of the Field Notes (reverse of document 18) is a sketch map (fig. 14) of the Missouri River from about the mouth of the Osage River to some distance above the mouth of the Grand River. See Wood. (back)
14. See fig. 12. (back)
15. Probably one of the native species of Rorippa, yellow, or marsh, cress. The habitat description fits that of either Rorippa sinuata (Nutt.) Hitchc., spreading yellow cress; R. sessiliflora (Nutt.) Hitchc., sessile-flowered cress; or R. palustris (L.) Bess., bog yellow cress. Probably the reference is to the last, the most common species in Missouri. Steyermark, 758–60; Barkley, 123. (back)
16. Kansas River. (back)
17. "Lead Creek" to Charles Floyd, Whitehouse, and Ordway; present Rock Creek or Mud Creek, Cole County, Missouri. (back)
18. Following this entry are two pages of random writing mostly impossible to decipher. On the first is a column of notations which read
Joseph Whitehouse
much no much
434
860
1665
[8? net. wt.?]
9
[Joseph Whitehouse?]
On the next page are the words "Joseph Whitehouse" and a number of other writings, mostly illegible. (back)
Previous
Next