Children    When we Sent the 4 men to your towns, we expected to See & Speake with the Mahas by the time you would arrive and to 〈make〉 lay the foundation of a peace between you and them

The Speech of Petieit Villeu Little Thief, If you think right and Can waite untill all our Warriers Come from the Buffalows hunt, we Can then tell you who is our men of Consequnce—    My fathers always lived with the father of the B together & we always live with the Big hose— [3]    all the men here are the Suns of Chief and will be glad to get Something from the hands of their fathers.—    My father always directed me to be friendly with the white people, I have always done So and went often to the french, give my party pieces of Paper [commissions] & we will be glad—    The names [4] 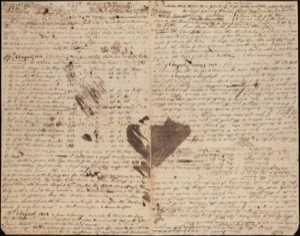 The Speach of the Big Horse    I went to the hunt Buffalow    I heard your word and I returned, I and all my men with me will attend to your words— you want to make peace with all, I want to make peace also, the young me[n] when they want to go to war where is the goods you give me to Keep them at home, if you give me Some Whisky to give a Drop to my men at home.

I came here naked and must return home naked.    if I have Something to give the young men I can prevent their going to war. You want to make peace with all, It is good    we want Something to give my men at home. I am a pore man, and cant quiet without means, a Spoon ful of your milk [whiskey] will qui[e]t all.

Those people were not well Satisfied with the Presents given them, they were much Surprised at the air gun and several curiosities which were Shown them none more than the magnet, those people became extreemly troublesom to us begging Whisky & little articles. Sergt. Floyd was taken violently bad with the Beliose Cholick and is dangerously ill    we attempt in Vain to releive him, I am much concerned for his Situation—    we could get nothing to Stay on his Stomach a moment    nature appear exosting fast in him    every man is attentive to him 〈york prlly〉 [York principally?]

a find morning wind from the S. E.    prepared a Small Present for the Cheifs and warriers present.    the main Cheif Brackfast with us, & beged for a Sun glass, those People are all naked, Covered only with Breech Clouts Blankits or Buffalow Roabes, 〈of〉 the flesh Side Painted of Differant Colours & figures. At 10 oClock we assembled the Chiefs & warriers 9 in number under an orning, and 〈Cap Lewis〉 we explained the Speech Sent to the nation from the Council Bluffs by Mr. Faufon. The 〈two〉 3 Chiefs and all the men or warriers made Short Speeches approveing the advice & Council their great father had Sent them, and Concluded by giveing themselves Some Credit for their acts.

We then brought out the presents and exchanged the Big horses Meadel & gave him one equal to the one Sent to the Little Thief [11] & gave all Some Small articls & 8 Carrots of Tobacco, [12]

we gave one Small Meadel to one of the Cheifs & a Sertificate to the others of their good intentions.

One of those Indians after reciving his Certificate delivd. it again to me the Big blue eyes    The chief petitioned for the Ctft. again, we would not give the Certft. but rebuked them verry roughly for haveing in object goods and not peace with their neighbours—    this language they did not like at first, but at length all petitioned for us to give back the Certificate to the Big blu eyes    he came forward and made a plausible excuse, I then gave the Certificate the Great Cheif to bestow it to the most Worthey, they gave it to him, we then gave them a Dram & broke up the Council, the Chiefs requested we would not leave them this evening.    we deturmed to Set out early in the morning    We Showed them many Curiosities and the air gun which they were much asstonished at.    those people beged much for wishey—    Serjeant Floyd is taken verry bad all at onc with a Beliose Chorlick    we attempt to relieve him without Success as yet, he gets wordse and we are muc allarmed at his Situation, all attention to him.

Augt. Sunday 19th    pleasant, S wind, the Indians got up their horses to water them, all the Indians appear to be friendly.—    at about the hour of 9 o.C. Capt. Lewis & Capt. Clark read a Speech to the Indians & counseled with them. Gave one a medel & the rest they gave commissions & made them all chiefs &C.    they appeared to be willing to make peace with the Mahars & all other Nations.    the Captains Gave them Some Small articles of Goods &.C—& gave them provisions while they remained with us.    the most of this day taken up in giving the Indians Good counsel &.C., Sgt. Floyd taken verry Sudenly Ill this morning with a collick. Capt. M. Lewis invited the above petevaliar the Big Chief to go to See the presidant &C. &C.

Sunday 19th    the Indians all appear to be friendly    at 9 oClock the Captains read a long Speech to them & Counseled with them, & Gave one a medal & the others they Gave commissions, & Some Small preasants &c    we Gave them provisions while they Remained with us.    Sergt. Floyd Taken verry ill this morning with a collick.—

Sunday August 19th    We still remained at this place, in order to hold a treaty with the Indians who are here, These Indians appear to be very friendly towards us, At 9 oClock A. M. Captain Lewis deliver'd them a long Speech (which was Interpreted to them by 〈Drewyer〉 a frenchman our Interpreter,[)] [13] and gave the head Chief a Medal, and to the other Chiefs, he gave Commissions; and presents were distributed among the whole of them.    We supplied them with Provisions plentifully whilst they remained with us.    in the Evening they left our Camp, being well pleased, One of our Serjeants named Floyd, was taken Ill of a Cholic this morning

1. Probably a "burning glass," that is, a lens for focusing the sun's rays to start a fire, an item the Indians would find both useful and intriguing. Lewis had purchased eight dozen of them for presents in Philadelphia in 1803. Lewis's Summary of Purchases [June 1803], Jackson (LLC), 1:93. (back)
2. The remainder of the material on this page of the Field Notes (document 43) is upside-down to the foregoing. Three words ("Roloje," "Francis," and "Durwain") appear above the Indian speeches at the edge of the page. For Roloje Creek, see below, August 22, 1804. "Durwain" is likely a variation of Dorion. It may be, then, that Francis (or François) Dorion is the name of the son of old Pierre Dorion, the Sioux interpreter; the date when this younger Dorion joined the party is not clear. See below, August 29, 1804. Authorities generally give young Dorion's name as Pierre. Jackson (LLC), 2:414. "Francis" may refer to someone else. (back)
3. The drawing of the horse at this point in the Field Notes (fig. 17) may be only a doodle, but it suggests that the chief Big Horse may have been carrying his shield or some other object bearing his personal symbol which Clark copied here. (back)
4. Linguistic analysis by Robert L. Rankin, Kenneth Miner, and John E. Koontz yields the following: Kháxe paha signifies "Crow head"; "Sar ná no ne" does not mean "Iron Eyes," but no definite translation is possible; Į̄swe xą́ǰe signifies "Big Ax"; Ištá graxą ǰe means "Very Big Eyes," without reference to the color blue; Mįkhe sewe apparently means "Black Raccoon," perhaps Clark's word "cat"; and Waš ó šegǫ may be translated as "Like [a] Brave." Waphíya may be translated as "He does [what is] Good." (back)
5. In 1811, traveler H. M. Brackenridge noted a Nebraska bluff, south of the mouth of the Platte, called L'oeil aufer (Iron Eye), "from an Indian chief who was scaffolded here some years ago." Maximilian, in 1833, heard the Oto name as "Ischta Maso." Since this was Oto territory, it is not unlikely that the chief interred there was the one met by the captains. The hill, which Nicollet labeled both "L'oeil de fer" and "Iron eye hill," is the later Rock Bluff Point, in Cass County, Nebraska, south of Plattsmouth. Nicollet (MMR), 384; MRC map 22; Thwaites (EWT), 6:76 and n. 26, 22:265 and n. 219. (back)
6. "Brave" implies a specific social status gained through war exploits (and perhaps vision power and membership in warrior societies). Such a status among the related Omahas has been confirmed. Research also suggests that the Oto organization of warfare was like that of the rest of the Plains Indians. Dorsey, 217; Whitman, 10–12. (back)
7. This paragraph is upside-down following the August 21 entry in the Field Notes (document 43) but clearly belongs here. (back)
8. The third reference to François Labiche as "William" (see above, July 4 and August 7, 1804). The special desire of the Otos for his services suggests that they knew him previously, probably from earlier trading ventures. See Appendix A. (back)
9. Under this paragraph, upside-down to the writing, appear these figures: 3, 3, 10, and a total of 16. (back)
10. Biddle's notation at the head of this portion of the Field Notes (reverse of document 43) reads, "Augt. 17 to 25." (back)
11. Apparently the captains had originally (August 3) given Big Horse a second-class medal (diameter 76 mm) and now gave him one of the large (105 mm) medals. Since a certain spiritual power was associated with such gifts, more was involved than mere jealously. Prucha, 92–93; Ronda, 22. (back)
12. Tobacco was transported in the form of twisted rolls called "carrots" because of their shape. Criswell, 22. (back)
13. Perhaps Labiche; see the fair copy entry of August 17. (back)
Previous
Next