A fair morning wind from the N W    we Set out at 3 oClock and proceeded on up the Travelers rest Creek, accompanied by the flat head or Tushapaws Indians    about 7 miles below this Creek a large fork comes in from the right and heads up against the waters of the Missouri below the Three forks, this river has extensive Vallies of open leavel land, "and passes in its Whole Course thro' a Valie" they call it 〈Valie Plain River〉 [Chicarluisket?] [NB: we call it the east fork of Clark's river ] [3] our Guide tels us a fine large roade passes up this river to the Missouri—    The loss of 2 of our horses detained us util'. 3 oClock. P. M.    our Flathead Indian being restless thought proper to leave us and proceed on alone, Sent out the hunters to hunt in advance as usial. (we have Selected 4 of the best huners to go in advance to hunt for the party. This arrangement has been made long sinc)    we Proceeded on up the Creek [EC: Travelers rest ] on the right [EC: hand] Side [EC: left bank] thro a narrow valie and good road for 7 miles and Encamped at Some old Indian Lodges, [4] nothing killed this evening    hills on the right high & ruged, the mountains on the left high & Covered with Snow. [5] The day Verry worm 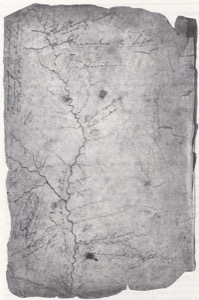 Wednesday 11th Sept. 1805.    a clear pleasant morning.    we went out to look up our horses.    the Latidude at this place is 46° 48° 28s 8/10 North.    we did not find all our horses untill afternoon.    about 4 oClock P. M. we Set out and proceeded on up this creek [6]    course nearly west.    the narrow bottoms on this Creek is thinly covred with pitch pine    passed a large tree on which the natives had a number of Immages drawn on it with paint.    a part of a white bear skin hund on Sd. tree.    we came about 7 miles this evening and Camped on a narrow plain near where had been a large Camp of Indians a Short time past. Saw one lodge made of Earth.    the pine trees pealed for some distance around.    the natives eat the enside bark.

Wednesday 11th.    This was a fine morning, and we went out to collect our horses, in order to renew our journey, and found all but one. Capt. Lewis had a meridian altitude that gave 46° 48 28.8 north latitude. In the bottoms here, there are a great quantity of cherries. The mountains are not so high, as at some distance back. At 4 o'clock in the afternoon the horse was found, and we proceeded on up the creek nearly a west course, through small bottoms. We went about 6 miles and encamped when our hunters came in but had killed nothing. The country is poor and mountainous.

Wednesday 11th Sept. 1805.    a beautiful pleasant morning.    we went out to hunt up our horses, but they were So Scattered that we could not find them all untill 12 oclock, So we dined here.    the Latidude at this place is 46° 48m 28s 8/10 [7] North.    the Snow on the mountain about 1 mile to the S. W. of us does not melt but verry little.    Some of the men who were hunting the horses detained us Untill 4 oClock at which time we Set out and proceeded on up this Creek Course nearly west.    the narrow [bo]ttom along this creek is mostly covred with pine timber.    passed a tree on which was a nomber of Shapes drawn on it with paint by the natives.    a white bear Skin hung on the Same tree.    we Suppose this to be a place of worship among them.    Came about 7 miles this evening and Camped on a Smooth plain near the Creek, where had lately been a large Encampment of Indians.    Saw one house made of Earth.    the pine trees pealed as far up as a man could reach.    we Suppose that the natives done it to git the enside beark to mix with their dryed fruit to Eat.    the Choke cherries are pleanty on &c

Wednesday Septemr—. 11th    A Beautiful pleasant morning, and we all turned out to hunt up our horses, but they were so scattered, that we did not find them all untill 12 o'Clock A. M.    We dined here and our Officers ascertained the Latitude of this place which they found to lay in 46° 48' 288/10 S North Latitude and named this place Travellers Rest .    The Snow on the mountains lying about One Mile to the South West, had melted very little.    Some of the Men that were hunting the horses did not come in till 4 o'Clock P. M.    At which time we set out on our Journey again,

We proceeded on up this large Creek nearly a West course, where we found the narrow bottoms along the Creek mostly covered with Pine timber; and passed by a Pine Tree on which a number of figures were painted 〈on it〉, & a White Bearskin hanging on the same tree, the figures were painted by the Natives & the White bear Skin, were placed there also by them.    We suppose this place to be a place of Worship among them.    We came about 7 Miles this evening, and encamped on a smooth plain, near the Creek that we had left & where there had lately been an encampment (which was large) of Indians.    We saw one encampment here made out of Earth & the Pine trees, pealed as high up as a Man could reach, which we suppose the Natives had done in order to get the inside bark, for to mix with their dried fruit to eat; it being the manner in which they prepare it—    We found the Wild or Choke Cherries plenty at this place.—

1. Here begins Clark's Elkskin-bound Journal, which runs to December 31, 1805. It starts as a collection of courses and distances with numerous sketch maps; the entries gradually expand into a regular journal, serving probably as a first draft for the notebook journals. Because of the greater detail in the codex entries, annotation is generally to those entries, which follow the ones in the Elkskin-bound Journal. At this point Clark's second entries for the day are still in Codex G. See Introduction and Appendix C. The sketch maps appear at the appropriate places. The ink on the first page is faded almost beyond reading. The edges of many pages are also badly worn. (back)
2. Clark's courses for September 11–25 are found after the codex entry for September 30, 1805 (see note there). (back)
3. Both Clark and Biddle have corrections for the material which follows the quotes. Clark changed "we" to "they" and substituted what may be "Chicarluisket" for Vallie Plain River, which he crossed out. Biddle crossed out the whole phrase and added his interlineation, all in red ink. (back)
4. They were starting west on the Lolo Trail, along Lolo Creek, the route used by the Nez Perces to cross the Bitterroot Mountains from their homeland in Idaho to the buffalo country in Montana. The name, thought to have derived from a French Canadian trapper, was not bestowed until after Lewis and Clark's time. Their camp was about one half mile east of Woodman Creek, in Missoula County, Montana. Space, 2–3, 5; Peebles (LT), 3; Atlas map 69. (back)
5. On either side are portions of the Bitterroot Mountains, to the south (left) are the Lolo Mountains with Lolo Peak in the distance. (back)
6. The party was starting west along Lolo Creek on the Lolo Trail, a route used by the Nez Perce Indians to cross the Bitterroot Mountains. (back)
7. The reading may have been added to a blank space. (back)
Previous
Next