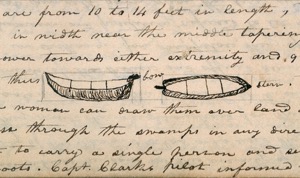 Two Indians Came last night very late to our Camp and continued all night.    early we had all the meat packed up and our Canoes loaded ready for to Set out and after an early brackfast at which time all things were ready and we Set out and proceeded to the Camp of Gibson & party about 9 miles, they had killed 3 Elk at no great distance and Wounded two others so badly that we expect to precure them. Sent a party of Six men with Shannon who had killed the Elk to bring in the Elk, and formed a Camp, near which we had a Scaffold made ready to dry the meat as Soon as it Should arive. Reubin Field killed a bird of the Quail kind or Class [13] which was whistleing near our Camp    it is [lar]ger than the quail or partridge as they are Called Kentucky and [Virg]inia.    it's form is presisely that of our partridge tho' its plumage differs in every part.    the upper part of the head, Sides and back of the neck, including the Croop and about ⅓ of the under part of the body is of a bright dove coloured blue, under neath the under beak, as high as the lower edge of the eye, and back as far as the hinder part of the eyes and thence comeing down to a point in the front of the neck about ⅔rd of it's length downwards, is of a fine dark brick red.    between this brick red and the dove colour there runs a narrow Stripe of pure white.    the ears are covered with some coarse dark brown feathers.    just at the base of the under chap there is a narrow transvirce Stripe of white.    from the crown of the head two long round feathers extend backwards nearly in the direction of the beak and are of a black Colour.    the length of these feathers is 2½ inches.    one overlais and Conseals the other which is Somewhat Shorter and Seems to be raped in the plumage of that in front which folding backwards colapses behing and has a round appearance.    the tail is composed of 12 dark brown feathers of nearly equal length.    the large feathers of the wings are of a dark brown & are reather Short in purpotion to the body of the bird.    in this respect very Similar to the partridge.    the covert of the wings and back are of a dove Colour with a Slight admixture of redish brown.    a wide Stripe which extends from Side to Side of the body and occupies the lower region of the breast is beautifully varigated with the brick red white & black which perdominates in the order they are mentioned and the Colours mark the feathers transversely.    the legs are covered with feathers as low as the Knee; these feathers are of dark brown tiped with a dark brick red as are also those between and about the joining of the legs with the body.    the foot is presisely that of the Common partridge except that they are as also the legs white.    the upper beak is Short, wide at it's base, black, convex, curves downwards and reather obtusely pointed.    it exceeds the under chap considerably which is of a white colour, also convex under neath and obtusely pointed.    the nostrils are remarkably Small, placed far back and low down on the Sides of the beak.    they are covered by a thin proterant elastic, black leather like Substance.    the eyes are of a uniform pierceing black colour.    this is a most butifull bird    I preserved the Skin of this bird retaining the wings feet & head which I hope will give a just Idea of the bird.    it's loud note it Single and Consists of a loud Squall, intirely different from the whistling of our partridge or quailes.    it has a chiping note when allarmed like our partridge.—    to day there was a Second of those birds killed which presisely resembles that just discribed. I believe those to be the mail bird the female, if so, I have not yet Seen.— [14]

at 6 P. M. Shannon and party returned with the flesh of five Elk.    the two he had wounded in the morning he found dead near the place he had Shot them.    we had the meat cut into thin pices and Scaffored with a fire under it to dry out, which we expect in the course of the night Can be effected.    four Indians from the great rapids visited us to day and Continued all day.    they give the Same account of the Scercity of provisions above the falls as has already been given by others. This Supply of Elk I think by useing economey and in addition of roots and dogs which we may probably precure from he Nativs on Lewis's river will be Sufficient to last us to the Chopunnish where we Shall Meet with our horses—.    and near which place there is Some deer to be precured.

Frazer killed a pheasent of the Common kind. Jos: Field killed a vulture of that Speces already discribed. [15]    in the evening late the Indians left us and returned to their village.    we derected that fires be kept under the meat all night.    and tha Drewyer and the two Fields proceed on to the next bottom and hunt untill we Should arive.    9 miles

Sunday 6th of April 1806.    a clear pleasant morning.    we loaded up and Set out    proceeded on verry well about 8 miles and halted at the Camp of our hunters they having killed 3 Elk in a bottom S Side    8 men went out for the meat    Ruben Fields killed a curious handsom bird [16] which made a curious noise    it had blue feathers on its breast and under its throat and 2 long feathers on the top of its head the longest 3 Inches long & a handsome Small bird.    he Skined it and it is taken care of to carry home with us.    in the evening the men returned with the meat of 5 Elk having found 2 more than they expected which the hunters had killed. So we Camped [17] here for the night in a Small willow bottom near high river hills on South Side    eat & fleased the greater part of of the Elk meat to dry &C.

Sunday 6th.    We had a fine morning, with some fog; about 10 o'clock we set out; passed a beautiful pairie on the north side, which we could not see for the fog as we went down; proceeded on about 9 miles and came to our hunters' camp. [18] they had killed 5 elk; so we halted, sent out for the meat and began to dry it. We are now at the head of the Columbia valley; which is a fine valley about 70 miles long, abounding with roots of different kinds, which the natives use for food, especially the Wapto roots which they gather out of the ponds. The timber is mostly of the fir [19] kind, with some cherry, [20] dog-wood, [21] soft maple [22] and ash; [23] and a variety of shrubs which bear fruit of a fine flavour, that the natives make use of for food.

1. The date of November 3 is almost certainly an error. The camp of that date is back downriver on present Government Island, Multnomah County, Oregon. Lewis must mean the camp of November 2, 1805, which would be in the right location. Camp designations on Atlas map 79 compound the mistake by indicating that the party remained at the same camp for this day where they had been since March 31, at present Washougal, Washington. Understanding that Lewis means that his position is relative to the camp of November 2, 1805, and that Clark's map is in error about spending an extra day in the Washougal area, the question remains, where did the party camp on April 6? Atlas map 79 leads one to believe that the camp of April 6 can be combined with that shown for April 7 and 8 and easily solve the problem. But that location is in error also. On April 9, after the party left the camp established on April 6, Lewis records that they passed several cascades (shown on Atlas map 79); these would be the Multnomah and other falls in the area. But they are all beyond the camp designated for April 7–8 on the Atlas map. According to mileage estimates and general descriptions, the party's camp for April 6, where they remained until the morning of April 9, was in Multnomah County, above present Latourell Falls and Rooster Rock State Park, in an area known as Sheppards Dell. Strong (LCC). (back)
2. Beacon Rock, in Skamania County, Washington; see November 2, 1805. Atlas map 79. (back)
3. Two views of the type of canoe in Codex K, p. 33 (fig. 8). A vertical line runs through this passage, beginning at "Sagitaria" to about the drawings of the boats, perhaps done by Biddle. (back)
4. Probably a piece of cord impregnated with gun powder. (back)
5. Biddle has more information on tribes at the Willamette (Multnomah) River, perhaps learned in conversations with Clark in 1810. Biddle Notes [ca. April 1810], Jackson (LLC), 2:542–43. (back)
6. Mt. Adams, in Yakima County, Washington. (back)
7. Train oil is generally whale oil. (back)
8. According to Lewis here, they were a branch of the Cushooks (see April 2, 1806). They are listed among the Wapato Indians in the Estimate of Western Indians, separate from the Cushooks. The term is Chinookan nimál/ x̣ winix. Silverstein, 534. (back)
9. Tillamook Indians on the Tillamook River; see January 8, 1806. (back)
10. Here appears a diagram of the house in Codex K, p. 39 (fig. 9). (back)
11. Probably due to trachoma and gonorrheal conjunctivitis. Cutright (LCPN), 223–24. Several lines following this are crossed out by a vertical line, perhaps Biddle's doing. (back)
12. See figs. 4 or 6. (back)
13. The first description of the mountain quail, Oreortyx pictus [AOU, 292]. Clark is here probably copying Lewis's entry of the next day. The specimen is being compared with the northern bobwhite, Colinus virginianus [AOU, 289]. From the preserved skin Charles Willson Peale later made a drawing of the bird that is extant today at the American Philosophical Society, Philadelphia. Cutright (LCPN), 281, 288, 385 n. 92, 435–36; Burroughs, 219–20; Holmgren, 33. (back)
14. The female resembles the male but is a little duller in color. (back)
15. Lewis's description of the California condor is at February 17, 1806. (back)
16. Mountain quail, Oreortyx pictus, an expedition discovery. (back)
17. The camp of this day is somewhat difficult to locate. It is most likely above Latourell Falls and Rooster Rock State Park, Multnomah County, Oregon. See the note discussing this difficulty at Lewis's entry of this day. The party remained here until the morning of April 9. (back)
18. Where they remained until April 9. The question of the location of this camp is rather involved; see Lewis's entry for the date. Apparently it was in Multnomah County, Oregon, above Latourell Falls and Rooster Rock State Park, in an area known as Sheppards Dell. (back)
19. Most likely Douglas fir, Pseudotsuga menziesii (Mirb.) Franco. (back)
20. Perhaps bitter cherry, Prunus emarginata Dougl., or choke cherry. See Lewis's entry of April 12, 1806. (back)
21. Nuttall's dogwood, Cornus nuttallii Aud. ex T. & G. (back)
22. Perhaps bigleaf maple, usually called broad leaf ash by the captains. Other possibilities are vine maple, Acer circinatum Pursh, and Rocky Mountain maple, A. glabrum Torr. (back)
23. Most probably Oregon ash. (back)
Previous
Next