Late last evening we were visited by the principal cheif of Chilluckkittaquaws and 12 of his nation they remained with us untill 9 OC. when they all departed except the Cheif and two others who slept at my feet.    we loaded our vessels and set out after an early breakfast this morning.    we gave the indians a passage to the N. shore on which they reside and pursued our rout to the foot of the first rapid [1] at the distance of 4 ms.    here we found it necessary to unload the perogues and canoes and make a portage of 70 paces over a rock; we then drew our vessels up by a cord and the assistance of setingpoles.    from hence we proceeded to the bason below the long narrows 5 ms. further and landed on the Lard. side at ½ after 3. [2]    the Cheif when he left me this morning promised to bring some horses to barter with me at the bason.—    the long narrows [3] are much more formidable than they were when we decended them last fall    there would be no possibility of passind either up or down them in any vessel.—    after unloading the canoes and arranging the camp I walked up to the Skillute Village and jouined Capt.    he had procured four horses only for which a high price had been given, at least more than double that which we had formerly given for those which we purchased from the Shoshonees and the first band of Flatheads.    they have a great abundance of horses but will not dispose of them.    we determined to make the portage to the head of the long narrows with our baggage and five small canoes.    the 2 perogues we could take no further and therefore cut them up for fuel.    in the evening Capt. C. and myself returned to the camp at the bason and left Drewyer and three others with the merchandize at the village, three parsels of which had been laid by at the request of individuals who promised to give us horses for them in the morning.—    I shot my airgun in the presents of the natives at the village which excited great astonishment.—

early this morning I was awoke by a Indian from the nieghbourhood of our horses, he had he arived here yesterday & this morning found a Small bag of powder and ball which had been left when we exposed our goods yesterday and brought it to me. I had a fire made out and exposed the articles &c. 〈Several Indians Came〉 having increased the articles for each horse, and Sent out 2 men to hunt the horses bought yesterday. after Colecting them Sent Shabono and Frazer with the 4 I had purchased down to Capt Lewis.    and was tanterlised with the expectation of purchaseing more imediately. Great numbers of the Indians from the falls and both above and below.    none of them appeared anxious to part with their horses but told me that Several were Comeing from the plains about 1 or 2 P M. and laid by 2 parcels of merchindize and told me that they had Sent for their horses.    among other Tribes was those of the Skad-datts [4] who bantered the Skillutes to play with them at a Singular Kind of game [5] which was Soon Made up and 9 of a side Sat down    they were Some time making up their bets of Beeds, brass thimbles or tubes robes &c. &c.    when the bets were all made up the nine on each Side took opposides faceing each other at the distance of about 12 feet.    in front of each party was placed a long pole on which they Struck with a Stick and Sung.    they made use of 2 Small pices of bone in this form [6] and Size    a bone 〈of〉 was given to 2 men of the Same party who changed it from 〈side〉 hand to hand with great dexterity one hand above the other looking down, and when he was ready for the opposit party to guess he Seperated his hands Swinging them around the breast looking at the opposit party who waved their hand to the Side the bone was in.    if the opposit party guessed the hand of each man the bone was given to them.    if 〈not〉 neither it was nothing.    if they guessed one which they might single out if they pleased they recived his bone, and 〈won or〉 lost on the other as they hapened to fail in guessing    the also lose one if they fail guessing both The game is plaid at different numbers & each party has 5 sticks. Several of those games were played to day in which the Skillute won, indeed the won all the beeds and Som robes of the Skad datts which they [word unclear]    one other game [7] which they also played [word illegible] 2 by men with 4 Sticks.    2 black & 2 White under a kind of hat made of bark.    as this is a very intrecut game I cannot describe it:    the one who holds the Sticks places them in different positions, and the opposit party, guess the position of the black Sticks by a motion of either one or both of the hands.    each man has 4 Sticks.    this as also the other is accompanied with a kind of Song. This hat is about 12 inches diamuter and the Sticks about 5 inches long—.    at 3 P M Sergt Ordway arived with 3 men from Capt Lewis with elk skins and Some fiew articles Such as a Coat & robes. I had 3 dogs purchased, Soon after Capt. Lewis Came up with J. Fields    he had assended the river with much dificuelty to the bason 2 Miles below. I left Drewyer, Warner, Shannon & Goodrich with the articles and went down with Capt Lewis to the bason, Cut up 2 of our canoes for fire wood no horses more    maney nations resort here for trade 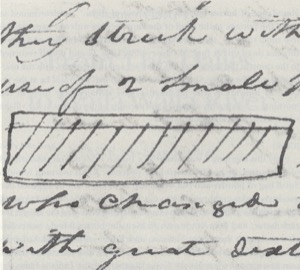 Friday 18th of April 1806.    a clear cool morning    we took breakfast and Set out    crossed the Columbia River to the N. Side proceeded on    Soon came to a rapid [9] where we made a Short portage and towed up the canoes & proceeded on up a rapid current to the bason & landed [10] on the N. Side about 3 P. M.    unloaded the canoes    cut the large ones for firewood    Capt. Clark had purchased 4 horses.    we packed several articles to the village to purchase horses.    bought 2 dogs Several cakes of chappalell &C.

Friday 18th.    We had fine weather, and all set out from this place, and proceeded on with great difficulty and danger to the foot of the long narrows; [11] and expect to be able to take the canoes no further.— Here we met one of the men [12] from Captain Clarke, with 4 horses. In coming up, one of our small canoes got split so that we were obliged to carry the load two miles by land to this place. [13] Wood here is very scarce, as the Columbia plains have commenced. Several of the men [14] went up to the village with their buffaloe robes, to dispose of them for horses. Could we get about 12 horses we would be able to go by land.

1. Not shown on any expedition map. Perhaps Threemile Rapids below today's The Dalles Dam. Atlas map 78. (back)
2. In Klickitat County, Washington, perhaps at today's Spearfish Lake. If so, it is the "Bason of dead water" in fig. 25, vol. 5 of this edition. Atlas map 78. (back)
3. The Long Narrows, with the Short Narrows, constitute The Dalles of the Columbia River. Atlas map 78. See October 24, 1805. (back)
4. They lived on Klickitat River, and were possibly a division of the Klickitat Indians. In the Estimate of Western Indians, they were incorrectly identified as being Pisquows or Kittitas; see April 20, 1806. (back)
5. A variation on the widespread hand game, a version of which Clark notes on December 9, 1805. Culin, 282. (back)
6. Here in the First Draft Voorhis fragment appears a sketch of the bone used in the game (fig. 10). (back)
7. Evidently a variation of the four-stick game described in Culin, 327–35. (back)
8. Camphor. Cutright (LCPN), 282. (back)
9. Perhaps Threemile Rapids below The Dalles Dam, Wasco County, Oregon. (back)
10. Perhaps at Spearfish Lake, Klickitat County, Washington. (back)
11. Part of The Dalles of the Columbia River. (back)
12. Clark says he sent Charbonneau and Frazer with these horses. (back)
13. In Klickitat County, Washington, perhaps at today's Spearfish Lake. (back)
14. Ordway and three men, according to Clark. (back)
Previous
Next